Time for Another Pizza Face Off at Eataly

February 27, 2012
It’s Monday again!  Yes that’s excitement because for 5 more weeks at least I can look forward to Eataly’s A Quattro Mani!  Mr. T and I went last week and ordered one signature pie from Eataly and one from guest pizzeria Motorino. 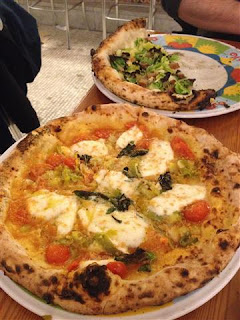 We tried to stick to similar pies so we could judge more fairly the pros and cons of each.  For Eataly it was the Bottarga & Porri with cherry tomato sauce, sautéed leeks, mozzarella di bufala and bottarga. 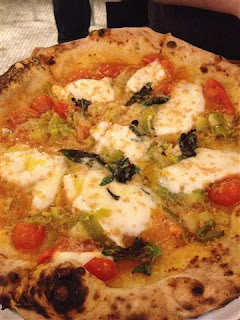 Wow- look at the combination of sauce, crust and cheese on this pizza.  I absolutely loved the cheese and found the sautéed leeks and cherry tomatoes interesting since it gave the pizza a sweeter flavor than usual.  The crust had a nice car and chew to it as well which was really surprising.  Onto Motorino we had to order our favorite Brussels Sprout & Pancetta with Fior di latte, garlic pecorino and smoked pancetta. 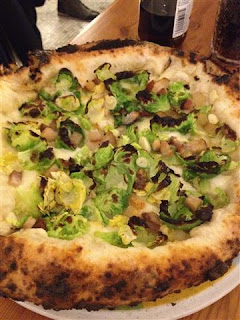 Okay look at the char on this crust- I mean it’s really hard to beat something like this.  The brussels sprout and pancetta were a perfect match although I do wish there was a little bit more cheese on top. 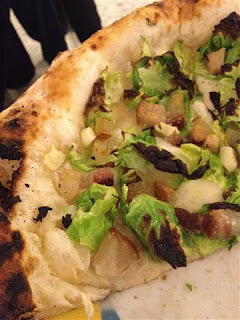 In the end I think Motorino won but only by a slight margin because Eataly’s was a little bit too sweet in the end.  However I would happily eat both of them again no problem.  This Monday Eataly is up against Luzzo’s and I may just have to go back for another pizza war.