February 24, 2012
Can I tell you about the best brunch I’ve possibly ever had?  Seriously look at these Lemon Ricotta Pancakes. 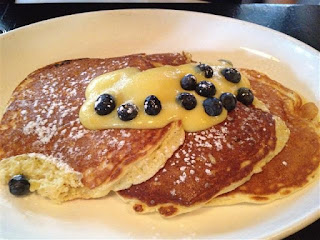 But I’m getting ahead of myself.  I have been absolutely dying to go to Andrew Carmellini’s Locanda Verde since it opened its doors about two years.  The menu looked absolutely amazing and I even stopped by opening day to check out the beautiful space.  So why did it take so long to get there?

Well I tried- my first reservation was cancelled because Mr. T got sick.  My second reservation was on my birthday when a delivery truck plowed into my car as I was driving just blocks away.  I watched my reservation time pass while I was dealing with some absolutely horrible delivery men (who were bullying my Mom and I saying it was our fault until the police showed up and they shut the f* up)  And honestly I don’t remember what happened with the last reservation time.  I just know it was cancelled and I felt a hex had been placed on my ever eating at this place.

Luckily I don’t believe in hex’s (I’m a Bill’s fan after all) and I made one more reservation for brunch. 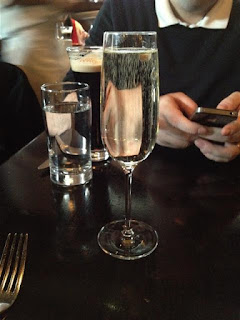 Mr. T and I were having a celebration of sorts so I started out with a crisp glass of Prosecco and he had a frothy milk stout from Left Hand Brewery.  All of the pastries sounded wonderful but the waiter recommended the Apple Cider doughnut and I’m so glad he did. 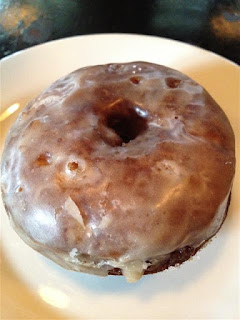 Look at the smooth glaze seeping into each little nook... 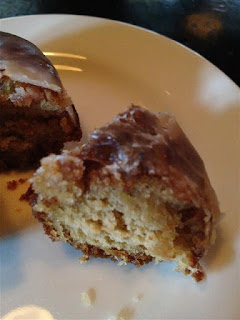 …and the rim of moist cider on the edge of the cake.  This reminded me of the Tres Leches cake from Doughnut Plant except in Apple Cider form.  It was so awesome I almost ordered another one but then our appetizer came out- Sheep’s Milk Ricotta with truffle honey and burnt orange toast. 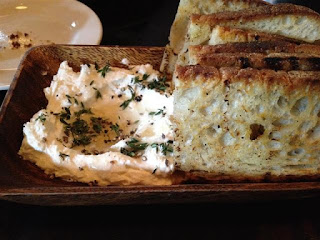 The Ricotta was incredibly creamy and I loved the sweet honey and earthy truffle mixed inside.  It was way too large a portion for two people so we only finished about half of it but I would order again with a group for sure. 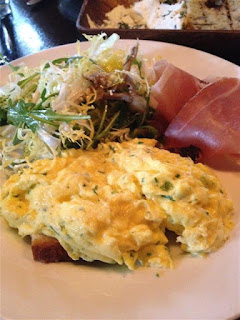 My entrée the Soft Scrambled Farm Egg Crostino with leeks, mushrooms and speck was quite possibly the most perfect brunch dish I’ve ever had.  The eggs were so soft and fluffy and the salty speck was the perfect complement.  This isn’t one of those mind blowing dished mind you- just an example of a dish firing at 100% perfection.  You saw Mr. T’s pancakes above.  The cakes were incredibly light and came with some tangy meyer lemon curd and fresh blueberries.  This was one brunch dish even Mr. T couldn’t complain about. 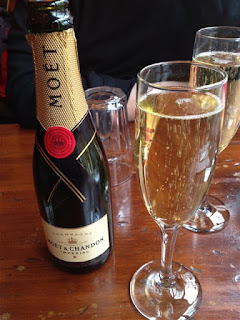 It was such a fabulous brunch we continued our celebration nearby with our annual split of Moet at Edwards and then up to midtown to see Avenue Q.  It was quite possibly the best afternoon I’ve had all year.

Locanda Verde is awesome.  It lived up to the hype and exceeded my expectations.  These expectations aren’t cheap however- brunch wound up being about $100 with tip but I think it was worth every single penny.  And see- there’s no such thing as hexes!