July 13, 2009
After meeting some friends out to celebrate with a couple birthday drinks at Spuyten Duyvil Mr. T and I hopped off the L train on 3rd avenue absolutely starving.

We were only about 10 blocks away from our apartment but I had no intentions of going home to cook. I needed food stat.

One of the first places we ran across was the little asian tapas joint Chino’s.

We used to frequent Chino’s quite a bit when they had a great lunch deal and really enjoyed the food, so we stopped in.

As I was perusing the menu I realized they had changed it quite a bit from the last time.

Nothing really sounded that appealing to me and I ended up ordering the Calamari Salad because it was one of the few entrees left that I used to enjoy at lunch.

About 3 minutes later the waiter came back with our dishes.

Now I was starving so quick food is great but how can someone put together quality dishes in that short amount of time?

Well they can’t- that’s the answer. 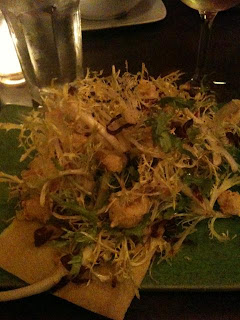 I took one bite of my salad and immediately needed a sip of water.

I was so starving I continued to eat for a few minutes until I literally had to stop because my lips were so salty I could feel them drying out.

Mr. T’s dish fared a little bit better but not much.

He ordered the Shrimp and Crab Udon Noodles. 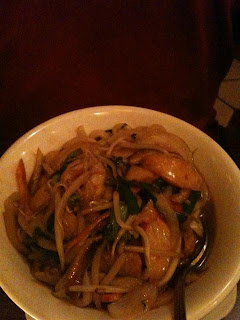 The shrimp was cooked well and the broth had a very nice flavor but look at the crab meat.

I really, really dislike imitation crab meat and Mr. T is no different.

Another problem was the lack of noodles. Usually the Noodles are the most prevalent ingredient in this dish but here they were far outnumbered by the vegetables and crab.

If you’re gonna cheap out on the crab then why not add some more noodles- they’re cheap?

We left the restaurant still quite hungry, really disappointed and me with the pruniest looking lips you’ve ever seen!

On the walk home we passed a number of places we could have eaten at instead and I decided then and there that we would never return to Chino’s again.

There are too many other great places in the neighborhood.

Luckily I did enjoy seeing some old friends and trying out some great new beers from Mahr’s Brau that night at Spuyten Duyvil. Things could be worse.