July 31, 2009
After a huge lunch at the river Café we spent the rest of the day walking around the city and stopping off here and there for some tasty alcoholic beverages and people watching. Until finally it was time to eat again! Hooray!!!

Although I had someone visiting I really wanted to go somewhere new. Luckily I had talked about wanting to check out Café Habana earlier in the week and Mr. Pruner remembered.

We showed up and noticed a crowd of people outside. I put in my name and was told the wait would be about 20 minutes. We were milling around the idea of walking over to Freeman’s when she came out and said our table was ready! We only waited two minutes!

One thing Café Habana doesn’t have much of is space. However living in NYC you learn quickly to cram in beside your neighbor and just enjoy.

We ordered a couple of Corona’s and our first dish arrived- the Grilled Corn Mexican Style. 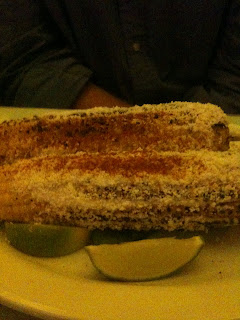 I had heard this was quite a tasty dish but I had no idea how much spice this would have! Cotija cheese, lime juice and a healthy dusting of chili powder erupted into an awesome burst of flavor that was quite addicting. (There might have been some mayo in there as well). I think I ate that ear of corn faster than any ear of corn in my life.

Of course I had to ask for some water after because my mouth was on fire- but it was worth it.

For our mains we both went with the Cuban sandwich. 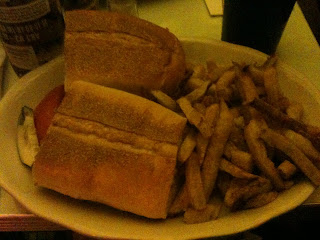 Unfortunately I didn’t get a good picture of the meat inside but believe me it was awesome. The pork was super moist and topped with Ham, Swiss Cheese and Pickles. Mr. Pruner said there could have been more pickles and I kind of agree but overall I thought it was a fantastic sandwich.

All of this great food and drink came to about $40.00 total. Not bad at all! And the corn was so good- I brought home an order just for Mr. T!