July 06, 2009
Mr. T and I spent our day off Friday watching some baseball and bumming around the East Village a bit.

I was surprised how many new places have opened up on Avenue A. So many new bars! With great drink deals.

We tried out a new one place next door to Drop Off Service and enjoyed some $3 Radeberger’s and then went to an old favorite Boxcar Lounge for their two for one deal.

We decided to grab some food around that area before we headed home so we walked over to Back Forty to see if there was a wait.

Luckily a spot had just opened up in the back so we were seated right away outside in the backyard.

The backyard had about six or seven large tables and reminded me of the backyard of Alchemy out in Park Slope.

We decided to start by splitting the Salt Cod Hush Puppies. 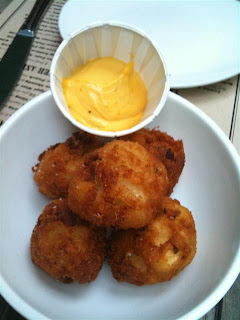 When we ordered these the waitress said they were out of the hush puppies but had the fritters…I’m not sure what the difference between fritters and hush puppies really is so we thought that was a little odd but whatever.

The fritters were piping hot and extremely crunchy.

I loved the jalapeno cheese sauce they came with but I didn’t really get that much of a salt cod taste for some reason. It seemed a bit masked by the breading but they were still quite good.

For my main I went for the Grass Fed Burger with Rosemary Fries. 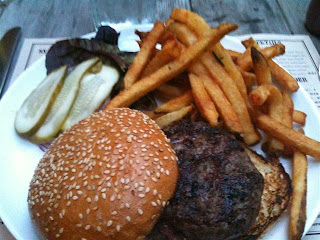 Back Forty bills itself as a burger joint at its core so I had high expectations for this meal.

The burger was pretty thick and had a nice earthy flavor but nothing else really stood out about it.

I mean it was tasty but I think I’ve had better burgers elsewhere.

Also it came pretty undercooked. I had asked for medium rare but the inside was almost raw. Mr. T was afraid to try a bite because it looked so raw. 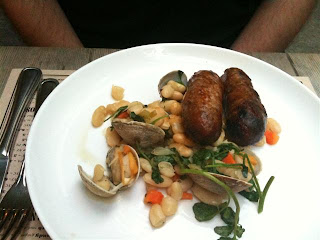 The Chorizo had a nice snappy outside and a spicy hot inside.

I didn’t try the clams or beans but Mr. T wasn’t exactly thrilled with the dish.

It was kind of boring. He didn’t feel satisfied when he finished because there wasn’t very much to the dish.

It needed another component- some pasta, bread something to tie everything together.

So overall we probably won’t be running back to Back Forty any time soon for their food.

The drink list however was great. They had a couple wines from North Folk and a bunch of great local beers.

I tried out the Captain Lawrence Pale Ale and Mr. T got a Brooklyn Brewery Cuvee.

I heard they have a happy hour from 6-8 every day where beers are half off. That might be worth coming back for.

burgerboy said…
Totally agree on the burger at back forty. For my money, I'd take the blue 9 burger any day.

I've been there on several occasions (i like to think of myself as an amateur frank bruni), and the food is always kinda bland. The beer special is great, though...
July 15, 2009 at 1:23 PM