Yey I Finally Tried It!!

January 18, 2008
So I looked all over for the Sam Adams Utopias 2007 and actually gave Whole Foods my number back in December telling them to reserve me one if they got some in. They called about 3 weeks later and said they had one- YEY!!! And that it would be $179!! Um...Not so yey.

I can't afford that! The 2002 was only around $100. I was shocked and decided that even though I really wanted to try it I just didn't have the funds.

I was a little upset but I moved on...until last week when something caught my eye. We were looking for a place to watch the football games at on Sunday and I was checking various bar websites looking for specials. As I was checking out the Village Pourhouse I saw they were doing a Brewtopia night where you could buy various tastes of beer for $1 a taste. The real thing that caught my eye though was at the very bottom. they would also be selling tastes of Sam Adams Uptopias for $13.

So Mr. T and I met up and got our Utpoias first thing. 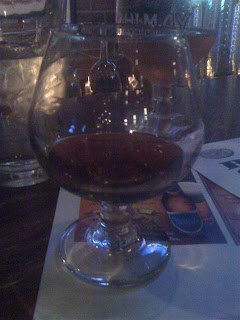 Just in case you don't know, the Sam Adams Utopias isn't just any beer. It's the strongest and most expensive beer in the world weighing in at 27% alcohol. Its actually considered a Barley wine. As you can see from the picture there was absolutely no head whatsoever to the beer.

Wow!! When I took a whiff it almost knocked me off my barstool! It smelled like the bottle of Sherry I took out of my parents liquor cabinet when I was a rebellious teenager (that was a BAD hangover)! I mean this smelled strong!!

I took a sip and it burned a little at first. Kind of like taking a sip of Brandy. But then something wonderful happened. It really mellowed out. The aftertaste was smooth and a little sweet. Very tasty!! This is the kind of drink you relax and enjoy.

I'll admit I think I like the Thomas Hardy's Barley Wine better. I simply enjoy the flavor more, but this was an experience and I'm so happy I got to try it!

There were about 50 beers on the menu available for tasting and Mr. T and I realized we had actually already tried them all except for 4 beers. We were pretty impressed with ourselves although their were no Belgians on the menu and some crappy Germans.

We tried the four we had never had and then left. The place was getting really packed and we just wanted to go home and get some shut eye before the long weekend. All in all a success!
Village Pourhouse