January 22, 2008
Since we had just started our budget we passed on going to watch the football games at a bar and just got some beers and watched them at home this weekend.

If your a Giants fan you know that this past Sunday was a great day for football. Eli Manning came out and got a huge win to send them into the Superbowl! Mr. T is a huge Giant's fan so we were jumping up and down in celebration. We were obviously several beers in by the time they won and a budget didn't seem so important anymore at that point :)

So we decided to go out and celebrate! We jumped in a cab down to McSorley's and had a LOT of these. 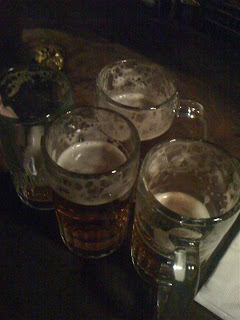 McSorley's was great. It was exactly the kind of crowd we wanted after such a crazy game like that- drunk and rowdy! We had a couple rounds and stayed out later than I have in ages! With all the drinking going on we kind of forgot about food all day. We were all set to grab a cab down to NY Noodletown for some grub when we remembered we were right near possibly the best drunk food in the world- Poutine.

Poutine originated in Canada and it basically became my favorite drunk food when I turned 19. My friends and I would go across the border to go drinking and then stop at Burger King before heading back to the US. Poutine was always on the menu and one drunken night I decided to try it out. This proved to be a life changing event. The warm gravy and melty cheese on top of those salty crisp fries was amazing!! We started to look forward to the poutine more than the beers every time we went I think.

I don't understand why the Burger Kings here won't add it to the menu! One of my friends wrote a letter asking them but never got a response:(

Well luckily I moved to New York where there is one place that has it- Pomme Frites.

So when we found ourselves literally half a block away we raced over and grabbed an order. Look at this masterpiece: 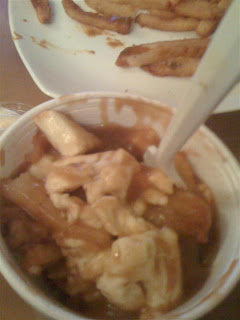 The photos are a little blurry (I wasn't exactly seeing to well at this point) but I think you can see why this is the best drunk food in the world. 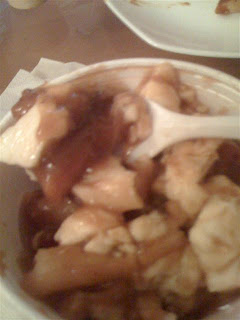 My college friend loved Poutine so much she would make it at home when she had too much to drink :) It's really that good! So if you find yourself in the East Village and "feeling no pain" as my mother would say, Pomme Frites will be your savior.