January 28, 2008
I was so excited when I heard Five Guys Burgers was opening in Brooklyn Heights right near one of the offices I work at. They had an opening date that kept getting pushed back and pushed back until I thought it was never going to open! But then it finally did and luckily I was there on opening day.

Since then Five Guys is my lunch treat. I generally try to eat a healthy breakfast and lunch during the week to make up for all the other crap I put in body the rest of the time. But Five Guys is so good I have to make allowances for it once in a while.

So what's so good about Five Guys? Well here's a picture of my burger just after opening it back in my office.

Looks kind of squashed and sorry huh. It has a nice soft bun and a good flavor to the meat but what I think makes the burger truly is the toppings. 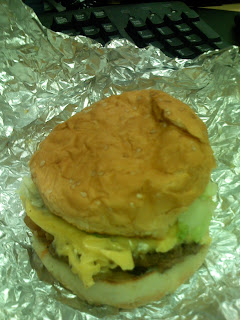 Five Guys offers either a Little Cheeseburger (which this is) which is one beef patty or a Regular Cheeseburger which is two beef patties. Then they offer all these topping for free: mayo, lettuce, onions, ketchup, tomatoes, pickles, fried onions, sauteed mushrooms, mustard, jalapeno peppers, green peppers, A1 Sauce, BBQ sauce & Hot Sauce!

That's a lot of toppings! 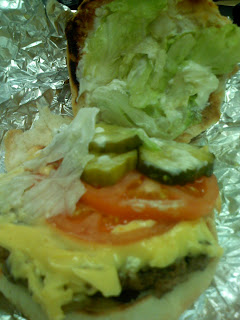 I get mine with the standard mayo, lettuce tomatoes, ketchup, pickles and fried onions. It's a whole lotta flavor packed into a little burger.

The other thing that makes Five Guys so great are the fries. They are a bit bigger than McDonald's but with a better crunch and lots of salt. Never order anything bigger than a small fry if you go. They easily give you enough for about 3 people!!

I heard one of these opened up in Midtown and is swamped. Luckily in Brooklyn Heights I can just call my order in and then walk over to pick it up in about a minute. This is no Shack burger, don't get me wrong, but it's pretty fricken good!