Touring NYC on a Budget

January 20, 2008
I decided to schedule a hair cut appointment for this Satudray since I knew Mr. T had to work most of the afternoon. I always get my hair cut on a weekeday and am usually so exhausted from work I just go right home after. My hair cut place is uptown around 54th street, so when I got done Saturday about 1:30 I decided to walk around uptown for a little while since I never do that anymore. If you named just about any place below 23rd street I could tell you exactly where it is....Uptown not so much. I never spend time wandering here. So I was pretty excited. I was feeling like a good cup of coffee to start out my day so I headed over to a place I had heard about last year called Fika.

Fika (prononced fee ka)bills itself as a Swedish espresso bar that's also kown for it's chocolates. Look you can almost see me in the reflection :) 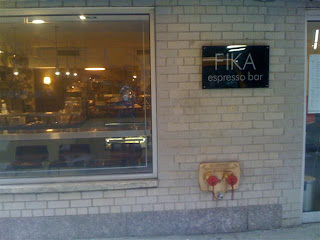 Fika is quite small with only about 3 tables and a short bar to sit at. I walked in and took a look at their pasteries. 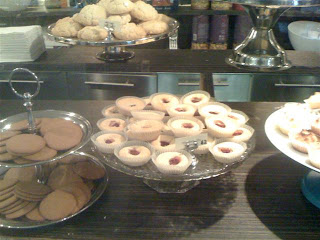 I wasn't feeling chocolate for some reason so I decided to order a vanilla cookie and a single Macchiato.

Now Mr. T and I just started a very strict budget so we can save money to actually pay off some of our debts so I was pretty happy when I was told the bill $3.25. That's pretty good! The cookie was only a dollar! Not too sabby for nyc.

So I happily grabbed a stool at the bar and sat down to enjoy my wares. 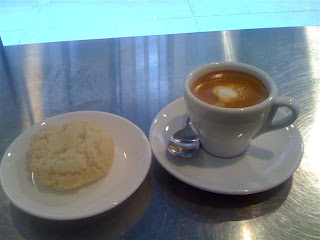 Now I haave to say that I do not know that much about coffee. Some people are really into where the beans are from, how they grinded, etc. Me? I just know what tastes good.

My favorite coffee place in the city is 9th Street Espresso. We usually end up in one of their locations every weekend. If were going to the East Village we first head over the Avenue C for an espresso or if were in the West Viallge our first stop is usually Chelsea Market for a spot.

So I was shocked when I took a sip of my Macchiato. 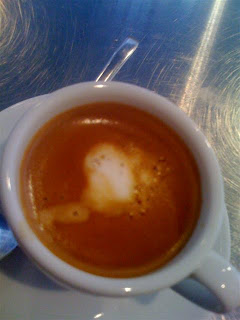 Why was I shocked? Because it was so AMAZING!!! I couldn't believe it! It was a little lighter than 9th street's but so perfectly balanced. I think I drank it in about 10 seconds. I feel kind of bad because I love 9th street so much but man...Fika stole my heart!

Then I tried out my cookie. The barista told me that it was very light for a cookie. I picked it up and it started to crumble...Oh no I thought. It's just really dry, but then I took a bite.

Wow! It was really light! Look at the airy holes inside. 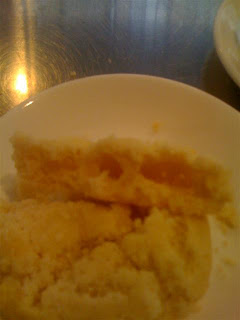 It was kind of a cross between a cookie and a merengue. I was extremly happy with my choices! I sat at the counter grinning and just watching the city go by as I enjoyed my treats.

I had such a nice time at Fika I decided to stay uptown for a little bit and walk around. I hadn't been up here in years so what the heck. I left Fika and headed west.

As I was walking down 7th avenue I saw all of these people standing in a line. I couldn't figure out what they were waiting for until I looked up and saw the sign. Carnegie Deli! 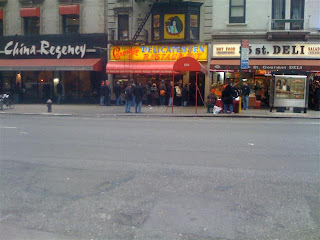 How funny I thought! I didn't know people actually stood in line for that place. I felt like a true tourist. I decided to enjoy it and see what other "touristy" things I could find when I stumbled actoss this place. 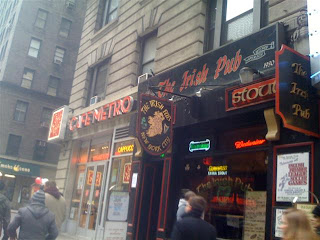 See what it's called? The New York City Irish Bar. I couldn't help but laugh. This was right outside of Times Square in the middle of tourist central. I couldn't help but wonder how many poor Irish tourist had been drawn into that place and probably charged about $9 for a Guiness. The city can be mean like that sometimes. 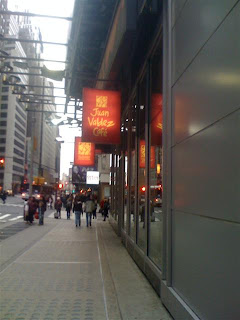 Since when did Juan Valdez open up a coffee shop in New York!!

Well I really was enjoying my time walking around but Mr. T called and said he was done with work and hungry. So I decide to head downtown to meet him for some food and drinks.

We met up and headed over the Crif Dogs since he had never had their hot dogs before and we figured it fit into our budget. We got there and the first thing I noticed is that they don't sell beer anymore! What's up with that? A hot dog and a Pabst's Blue Ribbon is what defined this place!

Oh well- we placed our order and took a seat. Now since Mr. T never tried this place before we went for 2 plain Crif dogs so he could try the original. Now usually this doesn't take longer than about 5 minutes but for some reason it took almost 20 minutes for our dogs! The place wasn't even crowded! Strike Two in my book. 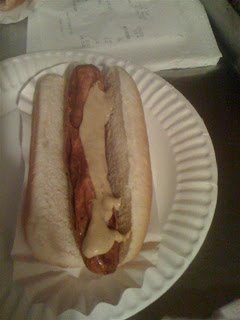 Well the dog itself was awesome as usual at least. It has such a different flavor than a Gray's Papya or regular ballpark frank because it's fried. And at $2 a pop it's quite the bargain.

After Crif Dogs we decided to continue our journey of staying on a budget by hittng up some 2 for 1 bars. We started at the Continental, then went to the Library Bar and finally ened up at Essex Street Ale House. We did pretty well for ourselves on a small budget!

After all those beers we needed some more food so we swung by Snack Dragon Tacos on the way home.

Snack Dragon used to be just a taco stand on the side of the street. Now it actually has it's own space with a little counter on the inside you can eat at.

I was starving so I ordered 2 tacos- the fish and the steak. 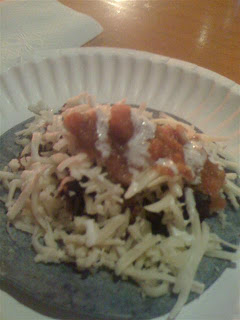 The steak itself was really good. It had defiently been slow cooked for a while in some great spices. The cheese and sauce were good as well. I didn't really care for the tortilla itself though. I prefer a hard shell taco.

Then I tried the fish: 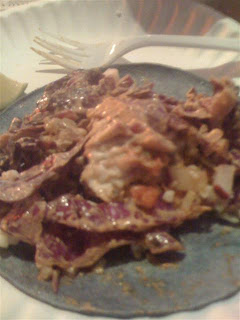 The fish itself was sole and I really didn't care for it. It tasted a little too...well fishy. I loved the cabbage that it came with though and ended up putting that on my steak taco instead.

Then we splurged and took a cab home. Still though..quite a cheap day for us!