January 06, 2008
I've already said a million times that the Tavern Room at Gramercy tavern is my favorite place in the world. And I've talked about the suckling pig from Eleven Madison Park as being one of the best dishes of 2007. And I've also put Union Square Cafe as one of my "wish list" places to go to in 2008. What do all of these places have in common?

Danny Meyer- genius restaurateur. All of these places are his and all are fabulous! The one place that I haven't talked about yet though is his smaller, though not lesser known place, the Shack Shake.

The Shack Shake is just what is sounds like. A little hut in Madison Square Park that sells burgers, custards, hot dogs and just great stuff. In the summer the line can be over 2 hours long. Lucky for me I only live 1 block away! So whenever it would rain or the weather would be nasty I would run over and grab some food because there would be no line.

Well now Danny Meyer has fulfilled my dreams and decided to keep the Shack open all year round!! I drop by now all the time with little to no wait at all.

So why is the wait usually so long? The burgers.

Now the Shake Shake burgers have been blogged about everywhere to the point of it being ridiculous so I wont say much other than it is one of the best burgers in NYC. Here's the burgers in the box. 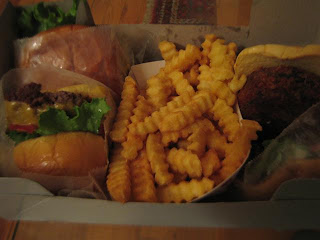 Close up of the Shake Burger. 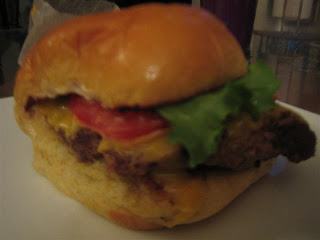 The Shake burger is a patty with cheese, tomatoes, lettuce and their special shake sauce. It's fantastic!!! But as I said everyone already knows that.

What everyone may not know is that they have another sandwich, especially for vegetarians, that is so good it almost rivals the Shake burger! It's the Shroom Burger. 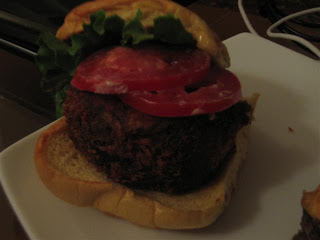 Kind of unimpressive at first. What makes it so good? Keep looking. 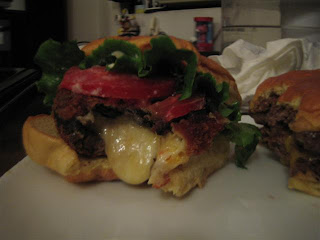 Oh yes. what is that inside oozing out?

Munster Cheese AND Cheddar cheese!!! It's basically a fried up Portabella Mushroom Burger filled with cheese and topped the same way the Shake Burger is with lettuce, tomato and special sauce. So good it deserves one more close up:) 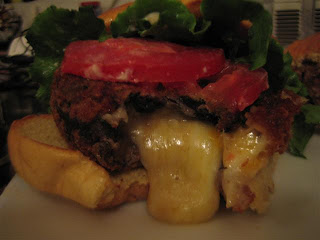 If you haven't been now is the time to check it out. They even put in heat lamps last week!!! And they supposedly have hot vanilla now too!!!