July 31, 2007
Mr. Trekker has been wanting to try out Morimoto since it opened over a year ago so I decided to take him out for his birthday dinner there. Since it was a special occasion we went all out and ordered the chef's omakase. I enjoy omakase because it takes the struggles of ordering off of oneself and you get to try a little of everything.


It was a nine course tasting of which only a few of the pictures came out well. I'll only talk about some of the dishes we really enjoyed. The place itself is all white with track lighting on the walls. It was a sleek beautiful space but not so conducive to picture taking.


The first course was Toro Tarter that came with creme fraiche, wasabi, rice balls, cilantro avocado and dashi-soy for dipping. It was topped with Osetra Cavier. This dish was only okay. It was a standard dish I would expect in any sushi joint. Nothing special.


Our second dish was steamed scallops and mussels with white asparagus, tomatoes and micro greens in a light vinaigrette. 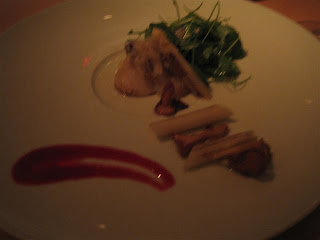 This dish was fantastic! My second favorite of the night. The scallops melted away as I tried to pick them up and even the mussels (which I usually hate) were soft with a smokey flavor. 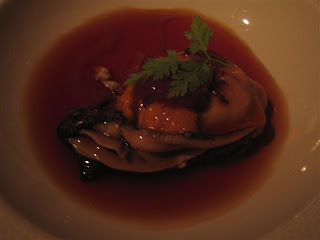 Our next dish was a kumamoto oyster that came filled with foie gras and uni. Then the whole thing was topped off with teriyaki sauce. Okay, I hate foie gras and uni and don't really care for oysters. That being said though...this dish rocked! I have no idea why it was so good but all of the flavors just worked together. I actually finished the whole thing. 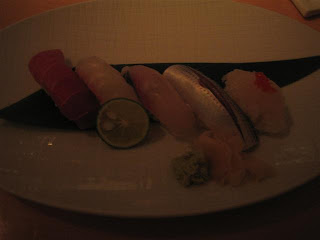 Our next curse turned out to be sushi. Usually sushi comes at the very end of the meal instead of the middle so we thought that was a little odd. I was actually thinking they had messed up and we were going to be missing courses. I started to get really nervous but it turns out that's just the way they do things here.

I was a little disappointed in the sushi. The fatty tuna was a little tough and the mackerel I just didn't care for at all. The other two were decent but nothing spectacular. I have no idea what they were because our server had such a thick accent it was impossible to understand him.

After the sushi course they brought us a pot of tea and a green tea black sesame macaroon as a palate cleanser. The macaroon was hands down the best one I've ever had. It was really small-only about one bite. I could easily throw down about 20 of these- no joke. If they ever start selling these things by the pound I will have trouble fitting into my tiny apartment.

Next came our two hot dishes. First up the lobster. 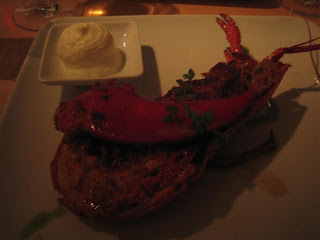 The lobster was Mr. T's favorite dish of the night. It was half a lobster tail that had been roasted in a garham masala making it spicy. It came with a side of lemon creme fraiche that was great for dipping the lobster into and cooling it down a little.

The last hot dish was my favorite of the night- the Wagyu beef filet. Unfortunately the picture came out too dark but the meat was amazing. It was cooked a perfect medium rare and was so tender it was like cutting into butter.

For dessert we had some sort of graham flavored cake topped with peaches and a peach sorbet. It was refreshing after such a big meal but nothing fantastic.

So that was our meal at Morimoto. Did I think it was good? Yes.

Will I go back? Probably not.

I have had much better Japanese food at Nobu, Le Miu and En Japanese Brasserie for less money. The bill here was pretty huge. I would say how much but I'm scared my father will read this and have a heart attack. So rather than send him to an early grave I'll just leave it at that.