July 26, 2007
So my oldest and dearest friends came to visit this weekend for some fun time in the city and a Yankees game. We woke up on Sunday after lots of day drinking at the game and needed a good brunch.

Mr. T and I have been to Dos Caminos only once for dinner so I was a little apprehensive about bringing my friends here for brunch. It started off a little rough too.

We were seated immediately and then waited for almost 20 minutes as people all around us, who had come in later, ordered their meals. We were extremely dehydrated and hadn't even been given water. I was starting to sweat out the little moisture I had inside when our waiter finally came over.

After that hiccup it was smooth sailing. Our waters were filled immediately, our drinks were brought within moments and our food came out quickly. 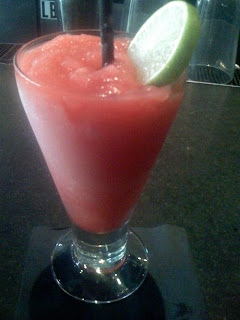 The margarita was really good !! I don't know if it was just the fact that we all were hung over and needed a little something to feel better or if was really just that awesome. It was a little too frozen when it first came but melted nicely.

For my entree I strayed a little from your standard brunch fare and got the Mahi Mahi fish tacos. These came with a spicy coleslaw on the side and some chili, tomato and avocado crushed on top. It was really good. I don't like rice and beans so I didn't touch them. 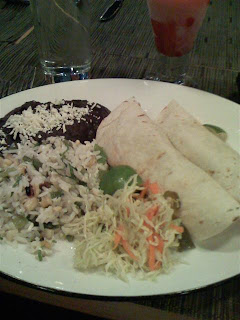 Two of my friends got the Breakfast Quesadilla. This thing was HUGE! Mr. Trekker joked that there was a dozen eggs in it but he probably wasn't far off. It was really tasty but it honestly could have used less of everything. There was so much egg and the pieces of bacon were enormous. It was hard to even taste the tortilla! Both of them only finished about a quarter of it. I would get it if we went back but definitely to split with someone else. 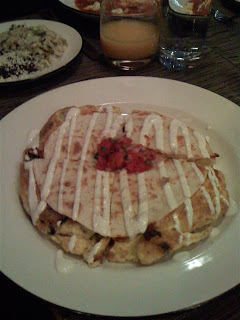 My other friend got the Huevos En Cazuela. This was poached eggs in a tomato chipotle salsa. I didn't think I would like this when I tried it was it was also good. I wish I would have found out what kind of cheese was inside because it was really soft like a goat cheese but had a much lighter, less pungent taste. 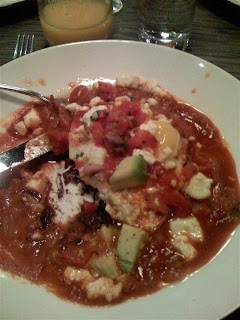 The only complaint I have besides the start of the meal was honestly the portions. There was just too much food! But hey, I guess that's not a bad thing. I had fish tacos for brunch and dinner!