Back to NYC- Back to the best Gramercy Tavern

July 15, 2007
So we met up with Mr. Trekkers folks this weekend since we had been visiting mine the week before. We started out by having a drink at The House. The House is a new place that recently opened in our neighborhood. It's actually a restored carriage house that is really beautiful. We had eaten here before and the food was nothing special but the bar is lovely so if you're in the area it's a great place to grab a glass of wine.

After drinks we decided to head over to Gramercy Tavern for an early dinner. We got a great spot right at the corner of the bar so we could all talk easily. Gramercy Tavern is one of my top 5 favorite places in the city. I have been here many times both in the regular dining room and the tavern room and while both are great I enjoy the Tavern room the most. The big glass windows are great for people watching and something about the long wooden bar just makes you feel right at home. Plus they have an amazing vintage beer list that is unprecedented in the city.

I wasn't feeling beer at the moment though so I opted for a nice glass of Sauvignon Blanc and Mr. T got an Aventinus. As we perused the menu we snacked on their nut mix which has a spicy glaze on top. 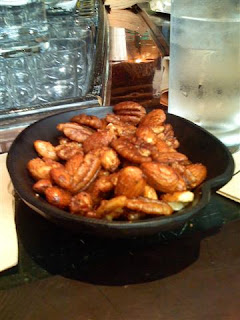 Since it was early we decided just to have a light meal. Mr. T's mom and I both liked the looks of the pulled pork sandwich so we decided to spilt it. I have split meals at the Gramercy Tavern bar a few times and its so nice. They always split it for you and bring it out on separate plates so there's no fussing around with cutting and passing food back and forth. 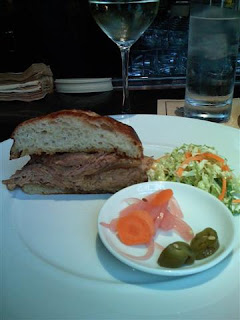 The pulled pork was nice and juicy. It had just the right amount of greasiness. The pickled carrots and onions it came with were excellent although I shyed away from the jalapenos.

Mr. T decided to get the soft shell crab appetizer which he said was excellent. It was actually a nice sized crab but all the greens it came with completely covered it in the picture. 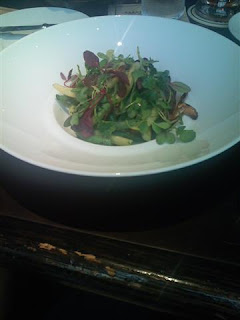 Gramercy Tavern does some of the best desserts in the city but we decided to over to Bar Stuzzichini since the parents had never been there before. We got an order of cannolis and the parents called it a night.

We got a call from a friends that they were at the Borough Food & Drink bar so we stopped by on the way home. The place was hopping! Luckily we got a seat at the bar and intrigued by the name, I deicided to try the Southampton Secret Ale. 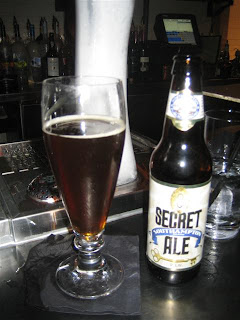 The beer poured a deep copper and had a spicy molasses flavor to it. It was a little to hoppy for me so I probably wouldn't order it again but it was decent.

I am always on the search for the best bathrooms in the city so I decided, why don't I start taking pictures of them! Borough's were nothing special but nice because there are about 5 single bathrooms. There's nothing better than a single bathroom! 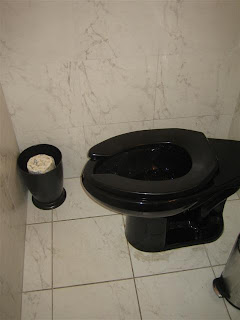 Anyway that was my Saturday!