July 28, 2007
We wanted to grab a bite to eat the other night near home so we decided to try out Borough Food & Drink. We had been here for the opening party to try out some of their stuff which was pretty good. Since then it's gotten a lot of press for having an excellent Burger so we thought we'd give it a shot.

It was about 6:00 on a Tuesday night and the entire place was filled. We were able to get the last table on the patio luckily and sat down right away. 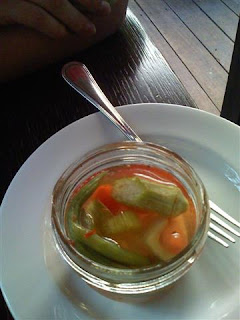 They started off by bringing over a free jar of pickled vegetables for us. I thought they were alright. I'm not really a fan of pickled veggies on their own. I need some sort of fatty meat to eat with them otherwise the taste is just too overpowering. 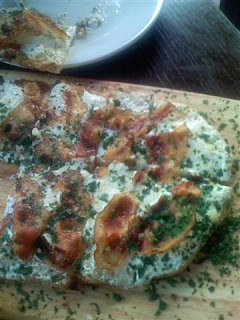 We weren't super hungry so we decided to split an appetizer and a burger. We got the Guanciale & Ricotta flatbread. The base was charred nice and crispy and the ricotta cheese was melted into the meat and then topped with rosemary. The flatbread was a little too oily for me but other than that it was good. 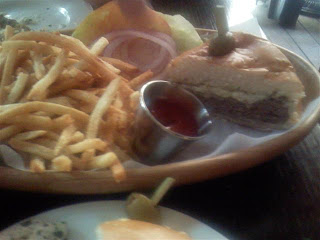 Next up was the burger which we had ordered medium rare. Unfortunately the picture didn't turn out to well with the sunlight streaming in but you can still see that it came clearly medium to well done. That being said I was really surprised how moist the burger still was.

The juices were literally seeping out of the burger. It had cheddar cheese on top and a caper aioli on the bottom. The aioli gave the burger a nice flavor that I hadn't had before in a burger and the cheese was extremely fresh. I would like to try this again and see how it is medium rare. All in all good meal though.