July 29, 2007
So in case you can't tell we've been on a big lobster roll kick lately. I know we have to stop, but Mr. T's brother and sister-in-law where visiting from Florida so it was a great excuse.
We were meeting friends later in the East Village so The Mermaid Inn seemed like the most logical choice. We showed up at 6:00 and got a table right away in their back patio. The patio itself was small but nice. It did seem a little like we were sitting in the back of someone's house but in a good way.
We started out with a bottle of the SOAVE 2005, La Cappuccina. This was an Italian white wine that was extremely crisp with lots of citrus. It was perfect for the humid, hot weather we were having.
We were all starving so decided to skip out on appetizers and head straight for the entrees. Three of us ordered the lobster sandwich and one of us got the grilled Mahi Mahi.
The lobster sandwich is exactly what it says- a sandwich. Instead of a hot dog bun it comes on a roll that's been grilled and coated with butter. The bun was good although I do prefer your more traditional roll. The lobster salad itself was great. It had less mayo and bigger chunks than Penelope's version. The fries were crisp and coated with Old bay seasoning which tasted great with the rich creamy texture of the lobster salad. 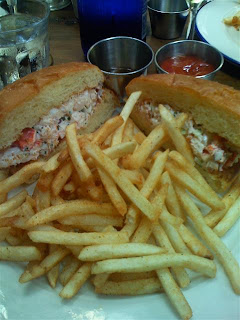 Investigative reporting under the bun. 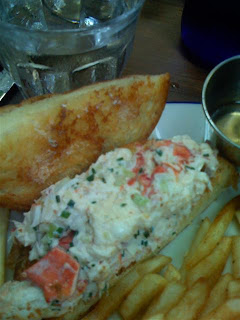 I never got a picture of the Mahi Mahi but it looked fantastic It came with chive mashed potatoes that were bright green. I will definitely be coming back here to try that dish.

Since they don't offer dessert here they give everyone chocolate pudding at the end for free. 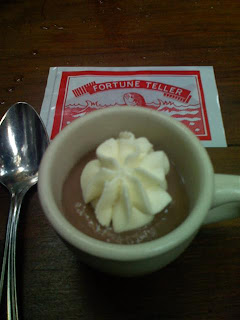 The pudding was good- nothing special but a nice touch I thought. It came with a fortune telling plastic fish. You place it in the palm of your hand and depending on what it does- that's your fortune. One curled up in a ball, one persons tail wiggled, one rolled over. Fun right?

What did mine do? Nothing. Dead fish it said. I tried every one thinking mine might just be a dud, but as soon as it got in my hand it just laid there.

So the Mermaid Inn was nice. Again I still like Pearl & Mary's roll the best but this is again a nice, relaxed alternative.

After dinner we went and had some beers at D.B.A. This place is known for having hundreds of hard to find beers that change on a daily basis. I've been here a bunch of times before and always really enjoyed it. Tonight however they seemed to be out of everything! I asked about seven different beers they had listed on the board and all were out. Why not erase them off the board then?

I did finally have a new beer that I enjoyed- the Kelso Saison. It was quite sweet with lots of carbonation. I probably wouldn't buy any to have at home but like the wine, it was perfect for the hot weather. The Kelso brewery is in Brooklyn so I'll definitely keep my eye out for some more of their beers.