The Absolute Ugh's of the Trip

March 08, 2017
After our lovely little meal at Septime and a stop at Brewberry I felt like I could continue on with our plans for Valentines evening with dinner and drinks at La Fine Mousse. Unfortunately there was really no great way to get there from Brewery so we decided to make the hour long walk...which is the stupidest thing you can do when you've been having stomach pains all day. 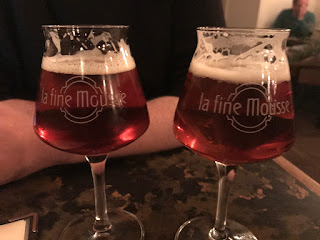 An hour later we had finally made it to La Fine and even with the delightful array of craft beers on tap and fantastic bartenders I knew things were about to be officially over.  We cancelled our reservations for dinner, hopped on the subway back to our hotel area and then finally, after a full day of saying "Mind over matter- you can do it!" my stomach said "I'LL SHOW YOU" and it certainly did.  It was awful- the only slight solace I had was that now whatever was making me sick just HAD to be out of my system; I had nothing left inside.  Maybe I would wake up the next day and feel fine.

But no- the next day I woke up feeling terrible.  My stomach hurt so much I could barely walk and I was too scared to even sip some water.  We cancelled our much anticipated reservations to Clown Bar for lunch and rotated between sitting in the park outside and the hotel lobby (since we had to check out of our room) until it was time for our afternoon train to Brussels.

We were both pretty down at this point.  We had been to Brussels three times in the past and one of us always manages to be sick.  We joked about it happening again before the trip but now that it was actually happening again it was incredibly not funny.  At least by the time we got to Brussels the stabbing stomach pains had subsided a bit so I could walk a small amount.  I encouraged Mr. T to at least try and have some fun so we walked around the corner to Nuetnigenough where he ate some delicious looking steak while I played with my fork.  Then I suggested we head to Moeder Lambic Fontainas, one of our favorite bars in the entire world so he could drink some beers.  We had actually choosen our Airbnb just because it was so close to Moeder Lambic. 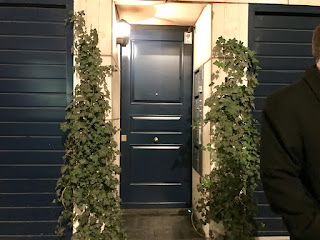 We walked past our place and turned the corner ready to embrace our lovely Moeder and were greeted with...a completely gutted building!  Not only gutted but filled with construction workers tearing downs beams, lights, walls; you name it, it was getting ripped apart.  I think we stood there staring in silent shock for almost a full minute unable to comprehend what was happening before our eyes.  It was only until we returned to our place and did some research that we found out Moeder had decided to close that week for renovations.

UGH...I was completely done at this point.  I was sick, tired, hungry and Mr. T's super disappointed face was just about all I could handle.  We decided to call it a night and hope for a better tomorrow.