March 02, 2017
Day two in Paris I woke up bright and early to do what I always do in this lovely city- go exploring all the wonderful Patisserie's!  Mr. T always jokes that Paris is magical because whenever he wakes up an array of pastries seem to wondrously appear in the hotel room.   I have a bit of a problem limiting myself while on vacation and this morning was no different.   I stopped into three different croissant shops, grabbed a breakfast sandwich (which would later lead to my demise) and finally landed at Stohrer the oldest pastry shop in Paris. 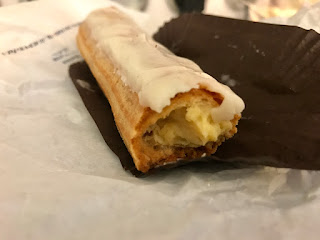 This tiny little bakery was opened back in 1730 by Pastry Chef Nicolas Stohrer, who just happened to be the pastry chef for Louis XV.  In addition to being credited with creating the very first Baba au Rhum they are also known for some of the best eclairs in Paris and I have to agree.  The outside was light and crunchy with creamy custard inside and a gorgeous vanilla ganache on top that seemed to sparkle in the morning sunlight. 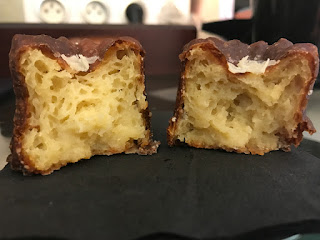 They also made an incredible canele' with a crisp caramelized exterior and an airy custard like interior where the smooth flavors of rum and vanilla balanced each other perfectly.  The store itself is worth a stop if not for the wonderful baked goods but for the history and colorful atmosphere.  The staff could be a bit more friendly but if you've been open since 1730 I guess you have an excuse to be a bit gruff.