March 20, 2017
After lambick-O-droom we hopped back on the train to Brussels and headed back to Cantillon brewery for one last time.  There we met up with a few more New York friends (we NYers like our lambic) and actually had about 3 hours to relax and share the entire list of bottles together. 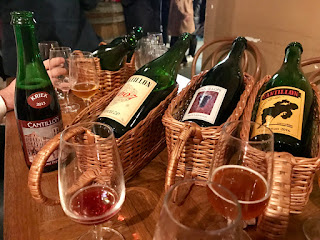 I was more than happy to have that Carignan and 2007 Cantillon Gueuze again... 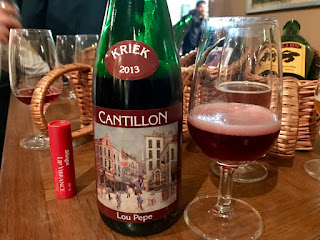 ...not to mention the gorgeous Cabernet franc driven Saint Lamnivus and possibly my favorite Cantillon in the world Lou Pepe Kriek. 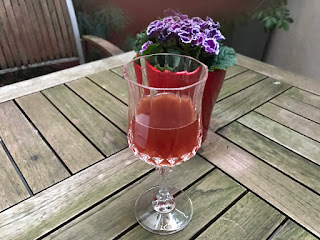 We picked up some more bottles to go and stopped at our place to drop them off, pausing for a moment in our small but gorgeous courtyard for a glass of Tilquin Mure. 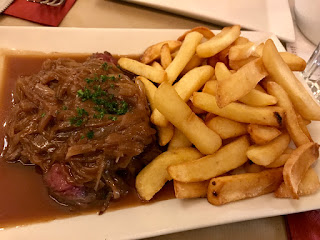 Then it was back to Nuetnigenough for dinner and this rich, hearty steak doused in a thick Cuvee Renee sauce.  I was so sick earlier in the week I could barely look at Mr. T as he devoured this dish so it was incredibly satisfying to enjoy myself in all its glory. 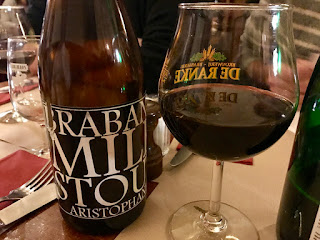 Nuetnigenough not only has great food but also a fantastic beer list.  We moved away from lambics for a moment with an Aristophanes Milk Stout but then it was quickly back to sours with the gorgeous Lou Pepe Framboise. 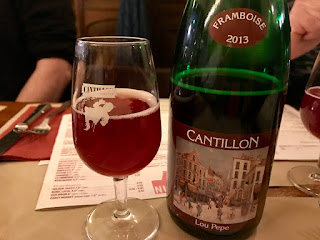 After dinner we said goodbye to our NYC friends and started to head home for bed.  That's when Mr. T stopped me and said "this is our last night in Brussels- let's get after it!" I honestly thought we had already been "getting after it" but there was no point in arguing.  So we hopped on the train to the original Moeder Lambic (as the one near us was still closed) for some more incredible Belgium beers. 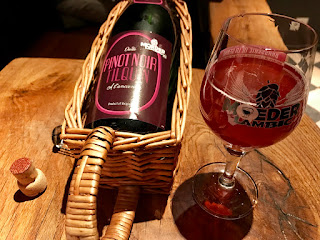 We started with the  beautiful Tilquin Pinot Noir, only available at Moeder Lambic for its 10th birthday celebration... 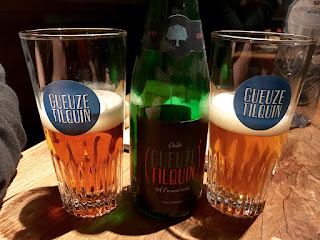 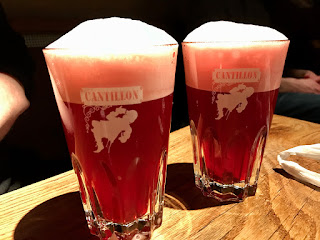 ...and a couple of Cantillon Rose de Gambrinus on tap. 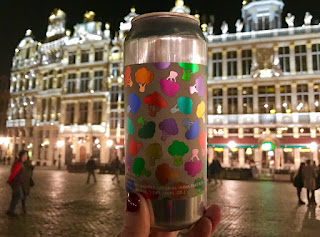 At that point we had drank a LOT of beer.  So we decided to play some Pokemon in the Grand Place and finish off the last IPA's we brought from home in order to make room for all the new beer we had purchased.  There was a stop for a late night doner kebab that we swore was the best thing we had ever eaten.  However now that the beer haze has lifted I'm pretty sure it was just a standard kebab (although when isn't a kebab delicious). 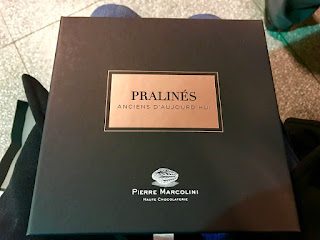 The next morning we had one last waffle, grabbed a box of my favorite Belgium chocolates from Pierre Marcolini and headed for the train station.  That pretty much wraps up the Brussels portion of our trip.  It started out at an incredibly low point but I'd say we finished strong :)