March 24, 2017
Our one and only night in Iceland just happened to coincide with the Iceland Beer Week kickoff at Mikkeller & Friends.  The Swedish guys from Brewski were in house along with hometown Iceland Kex Brewing to launch their collaboration beer Cookie Jar. 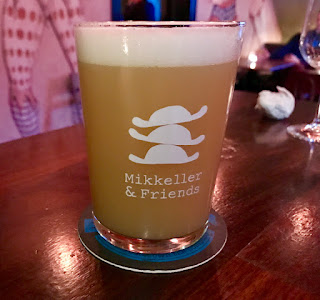 Billed as a New England style IPA this was made with wheat, oats, malted barley and a ton of hops creating that signature hazy orange body, thick frothy head and lots of bright citrus flavors. This beer was so good we immediately ordered another one along with the Brewski pale ale Mangohallonfeber which was a juicy blast of mango, pineapple and grapefruit. 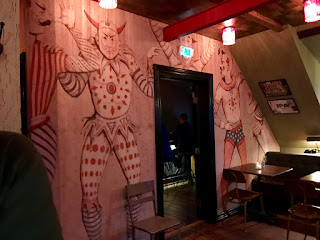 We had been to the Mikkeller & Friends in Copenhagen before which was casual and cozy but this one was definitely on the scary side.  Big red jesters were painted on the wall while dolls heads served as the centerpiece for the back of the room.  If I wasn't enjoying the Brewski beers so much I probably would have been a bit freaked out but damn they'e cranking out some delicious stuff!  Cheers to the weekend!