March 19, 2014
Mr. T and I were celebrating our wedding anniversary so of course we went as romantic and over the top as possible...BYOB sushi!  That might sound like we completely blew off  this anniversary but we actually went to one of the best new sushi places in the city- Tanoshi. 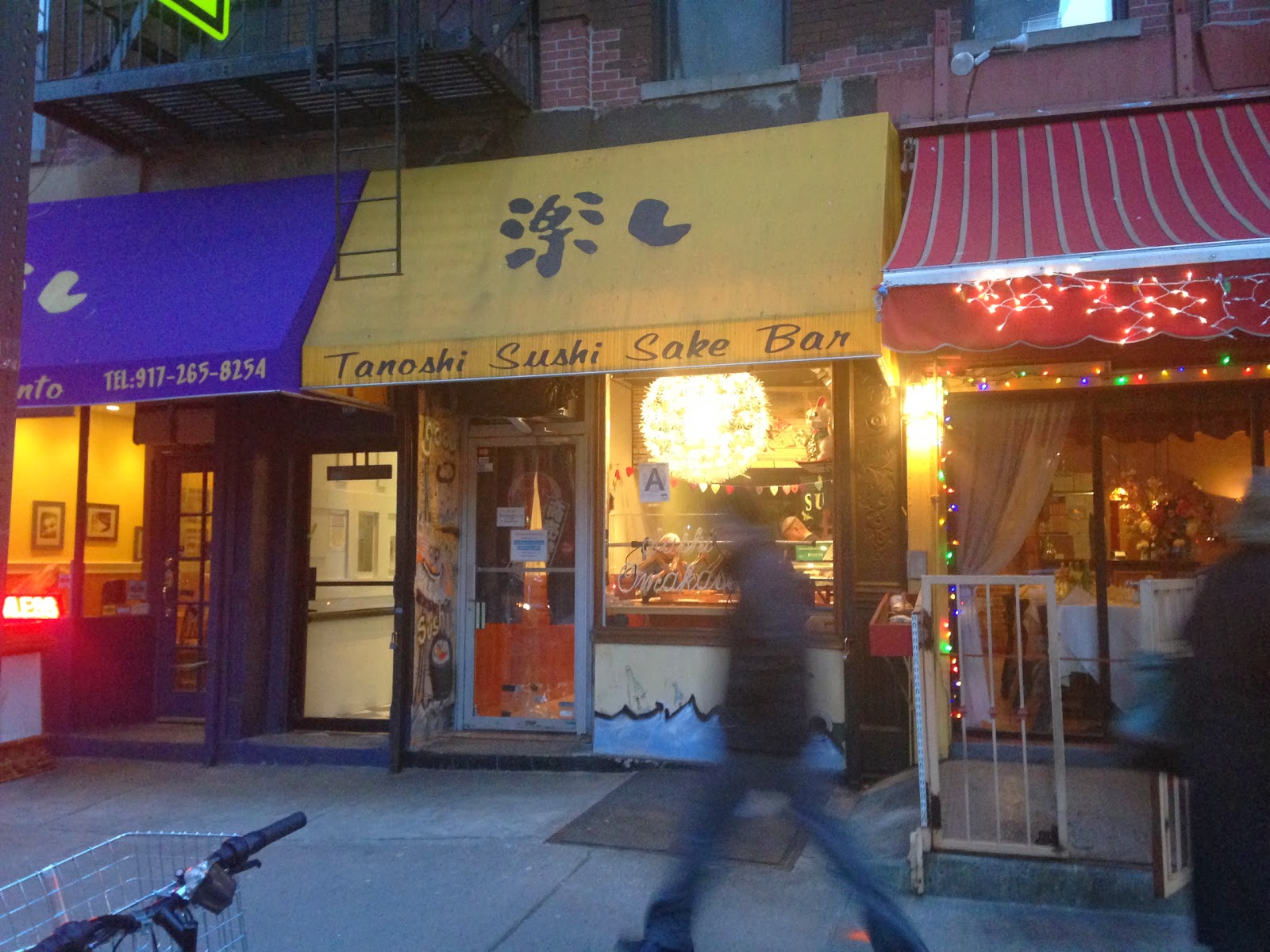 Tucked away inside a tiny storefront on the Upper East Side Tanoshi is easy to miss.  The only telling sign used to be a line of people each day at 2:00 PM hoping for a same day reservation (even Eric Ripert would wait in line).  Luckily they changed their strict reservation policy so they can now be booked online, making it slightly easier to get in and even easier to walk past without knowing. 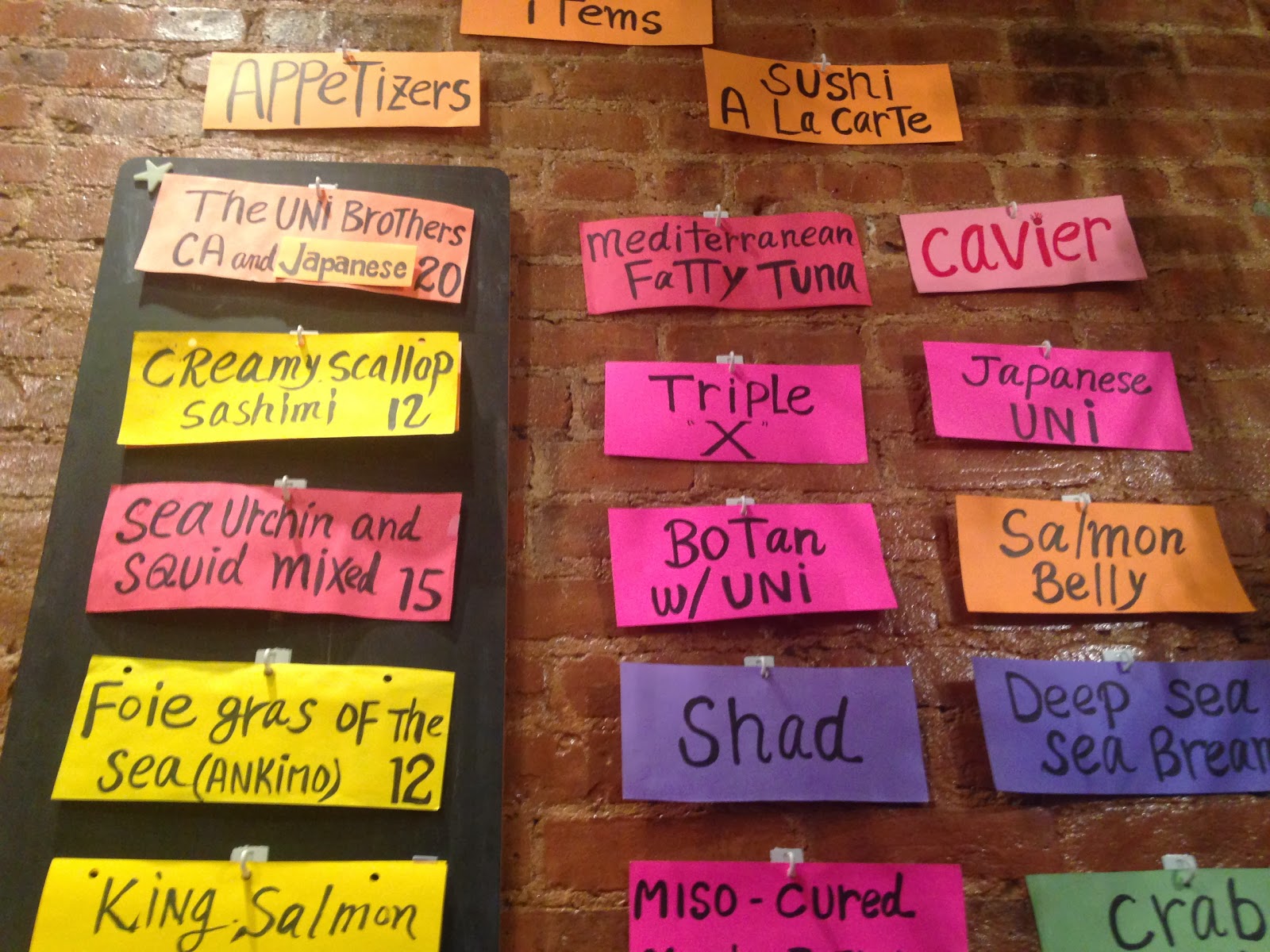 There are only 10 seats inside Tanoshi all of which surround the sushi bar.   The brick walls are adorned with the selections for the day and the colored pieces of paper are about the extent of the decor in the room.  We were lucky enough to sit right in front of Chef  Oguma the night we dined and before the omakase we began with a couple of appetizers. 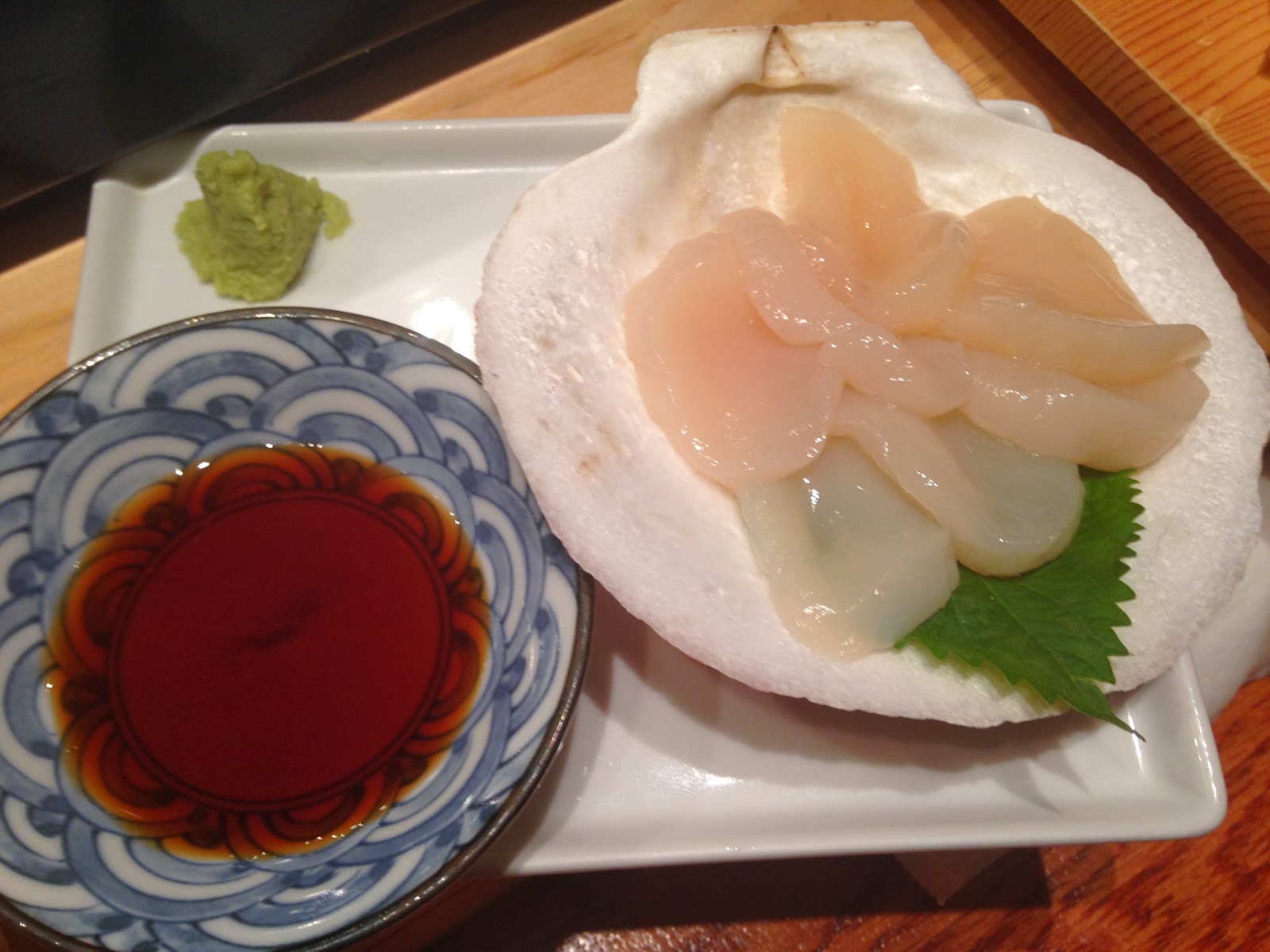 First a plate of Scallop Sashimi that was so soft and creamy it was almost impossible to pick up without ripping through the tender flesh. 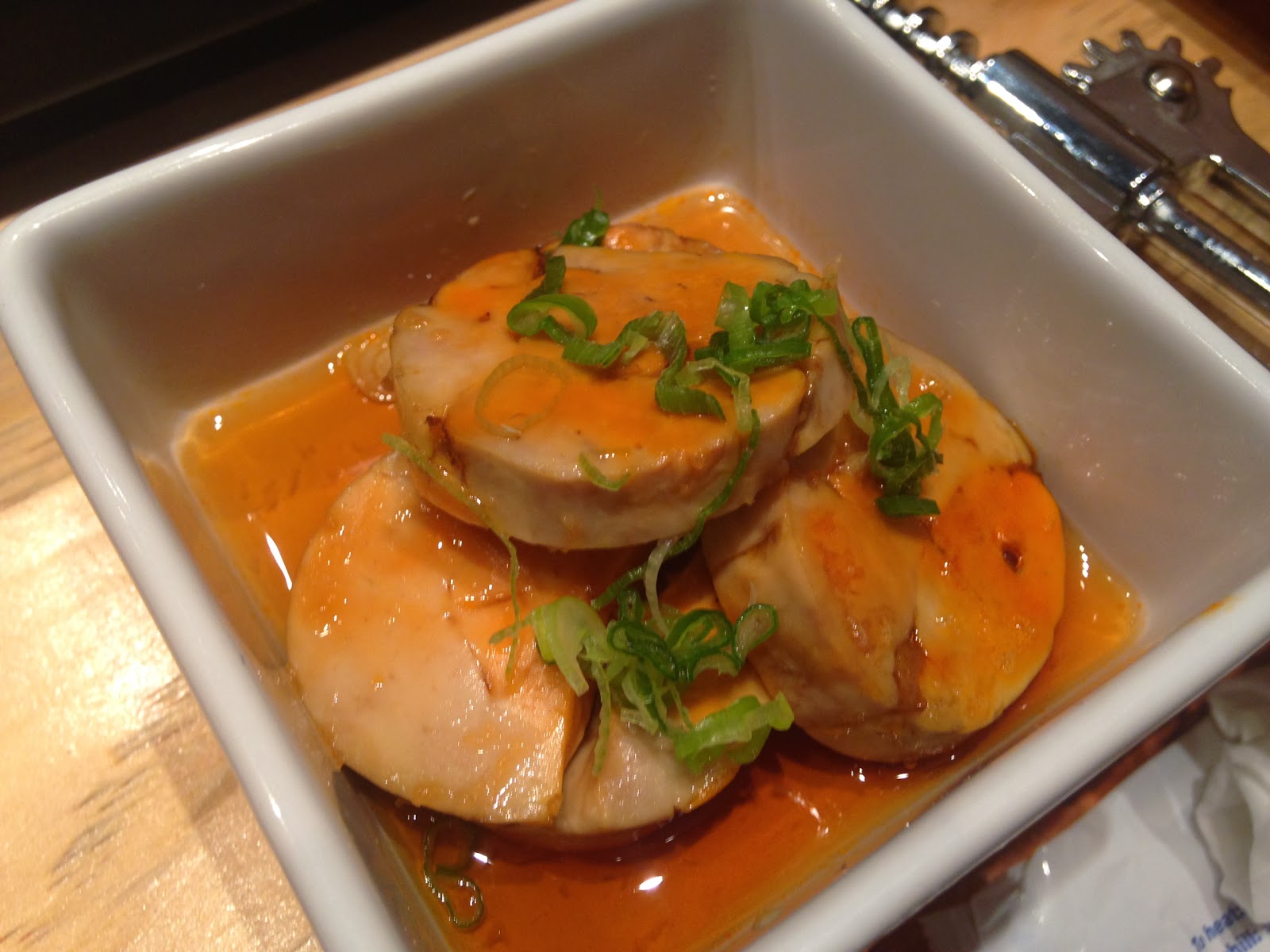 Monkfish Liver in a spicy ponzu sauce followed...aptly named "Foie Gras of the Sea" for it's rich, fatty texture and briny flavor. Then the chopsticks were removed so we could really get down and dirty with our omakase.  Our only instruction to the chef was a note about my salmon allergy and we were ready to go.  Here's a run down: 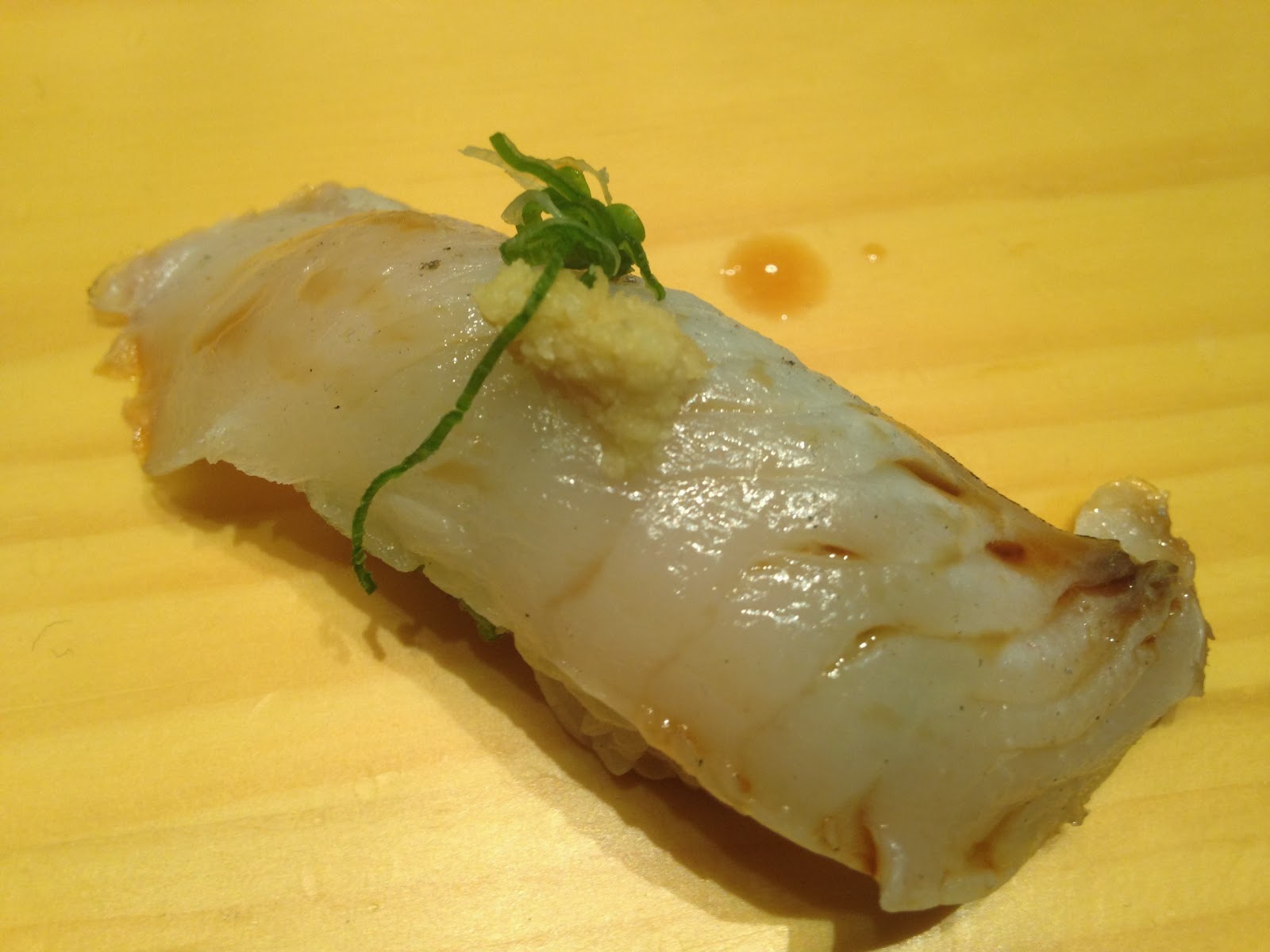 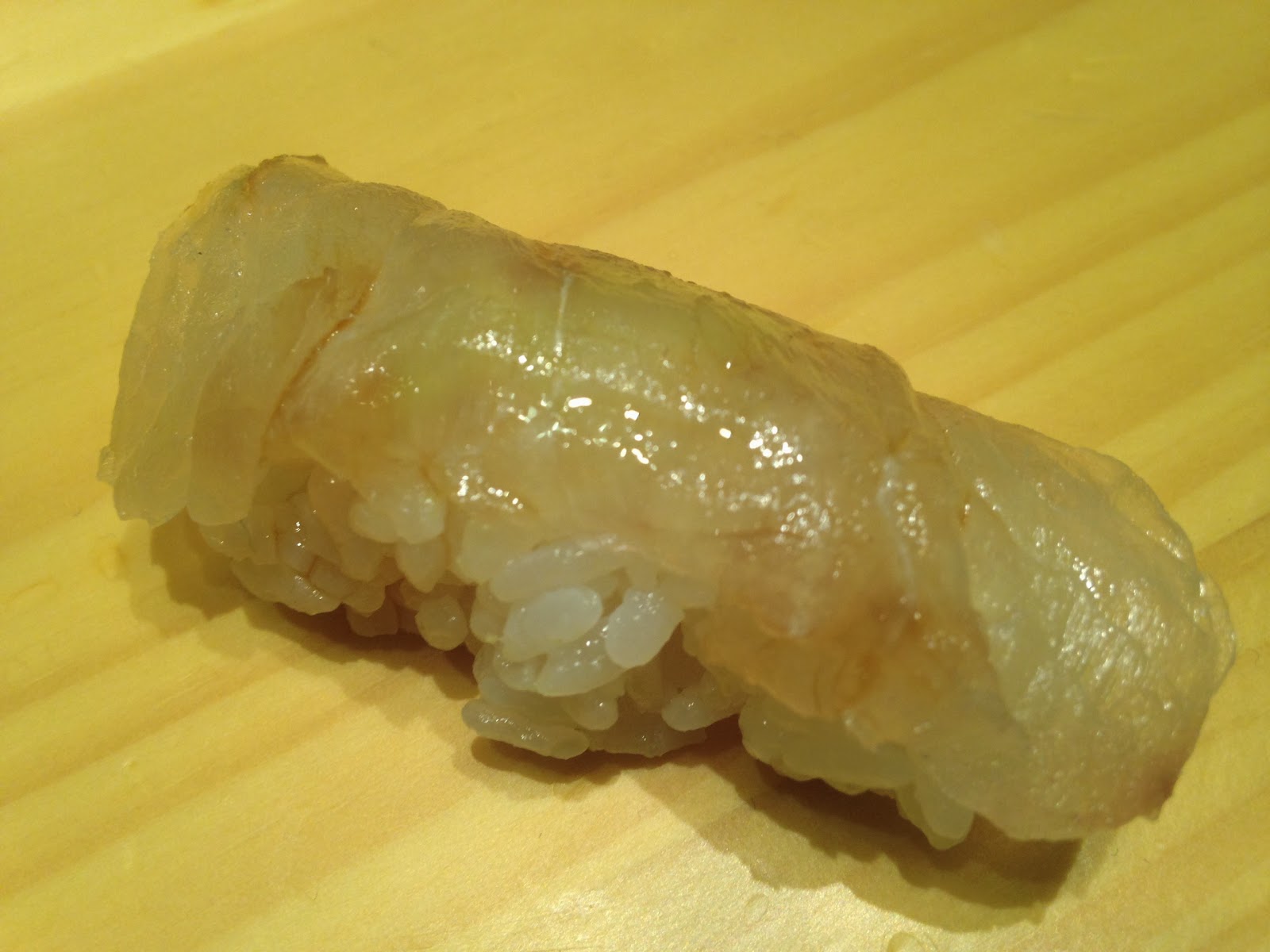 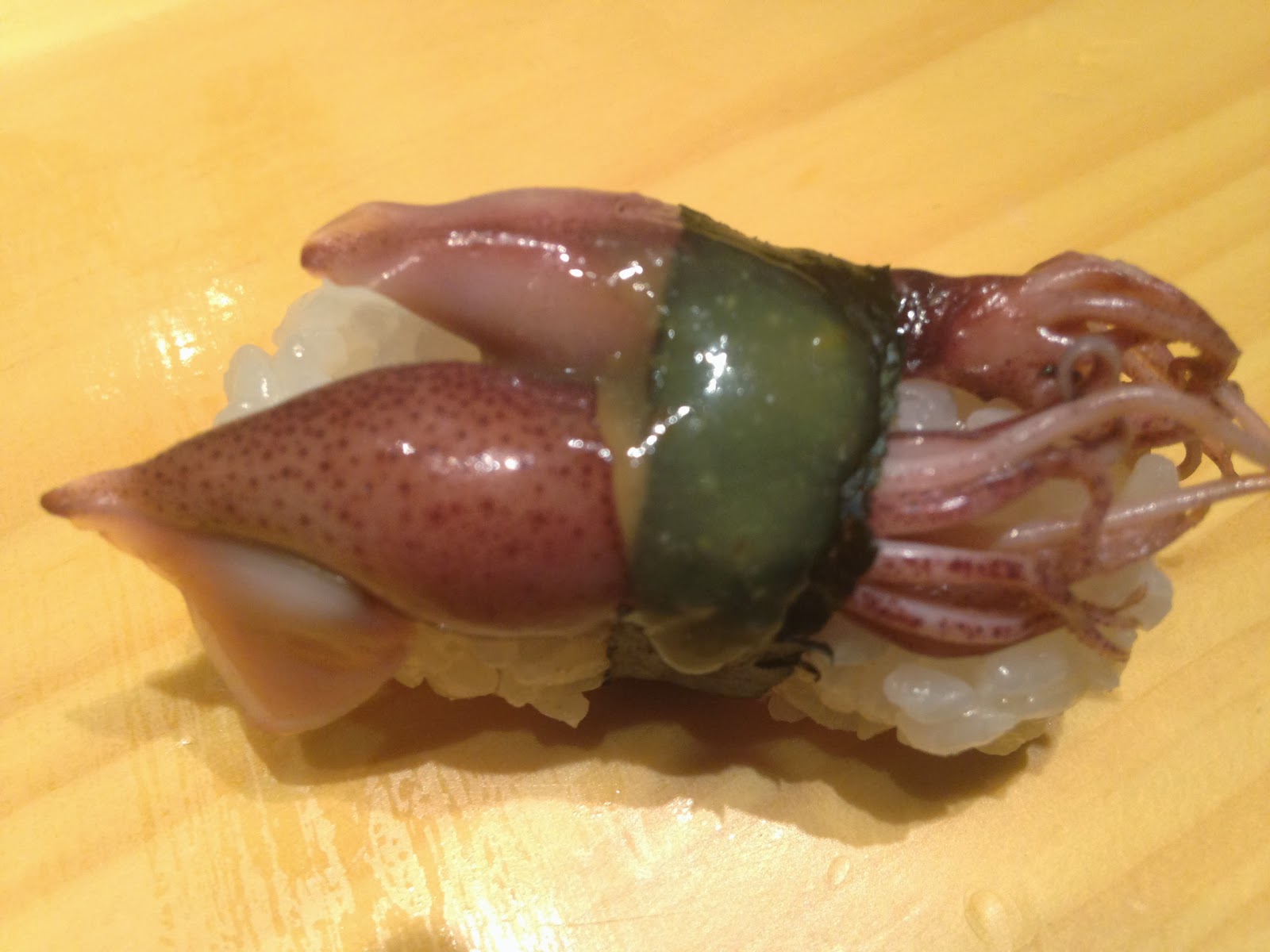 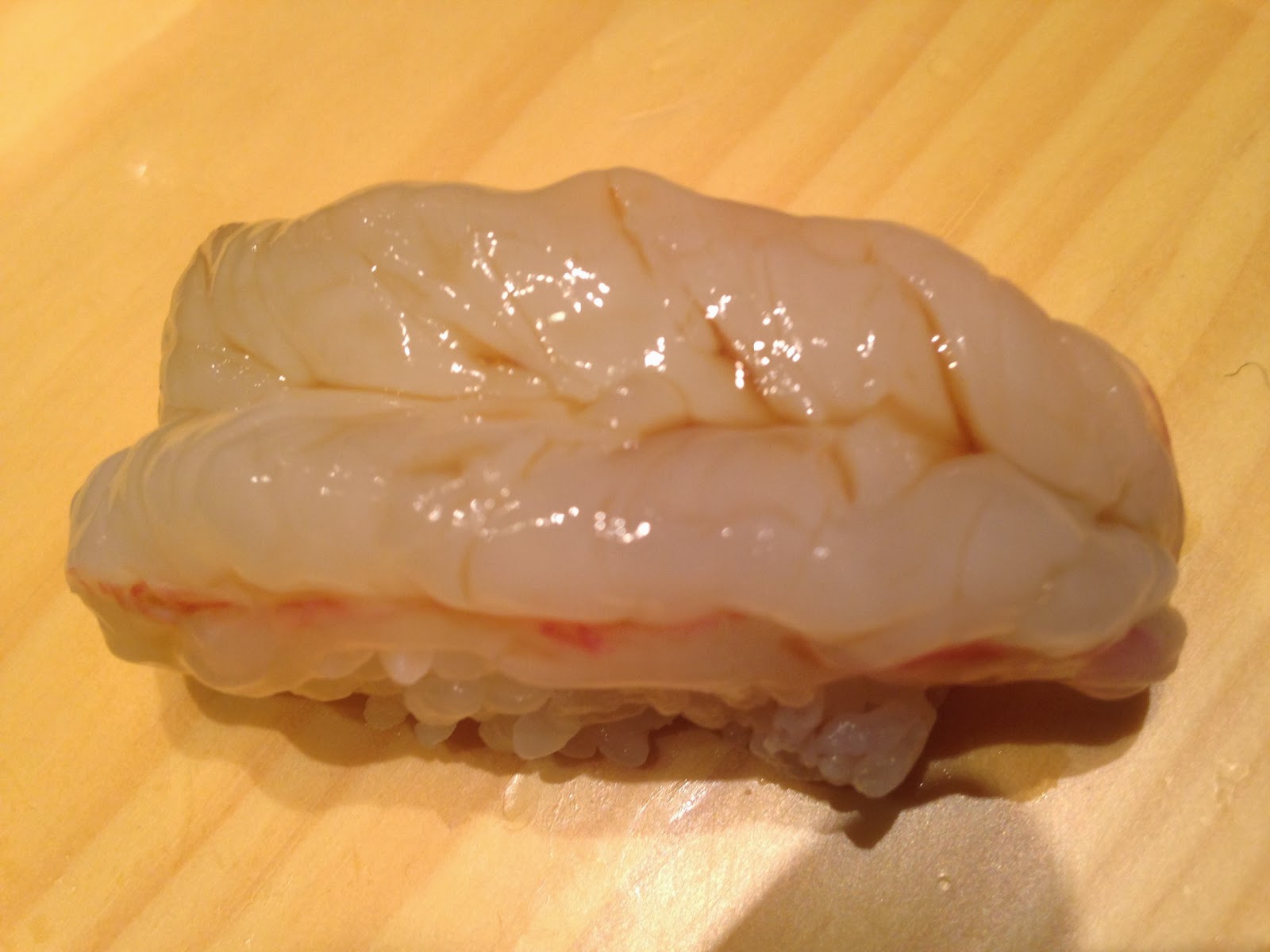 Botan Ebi (for me) 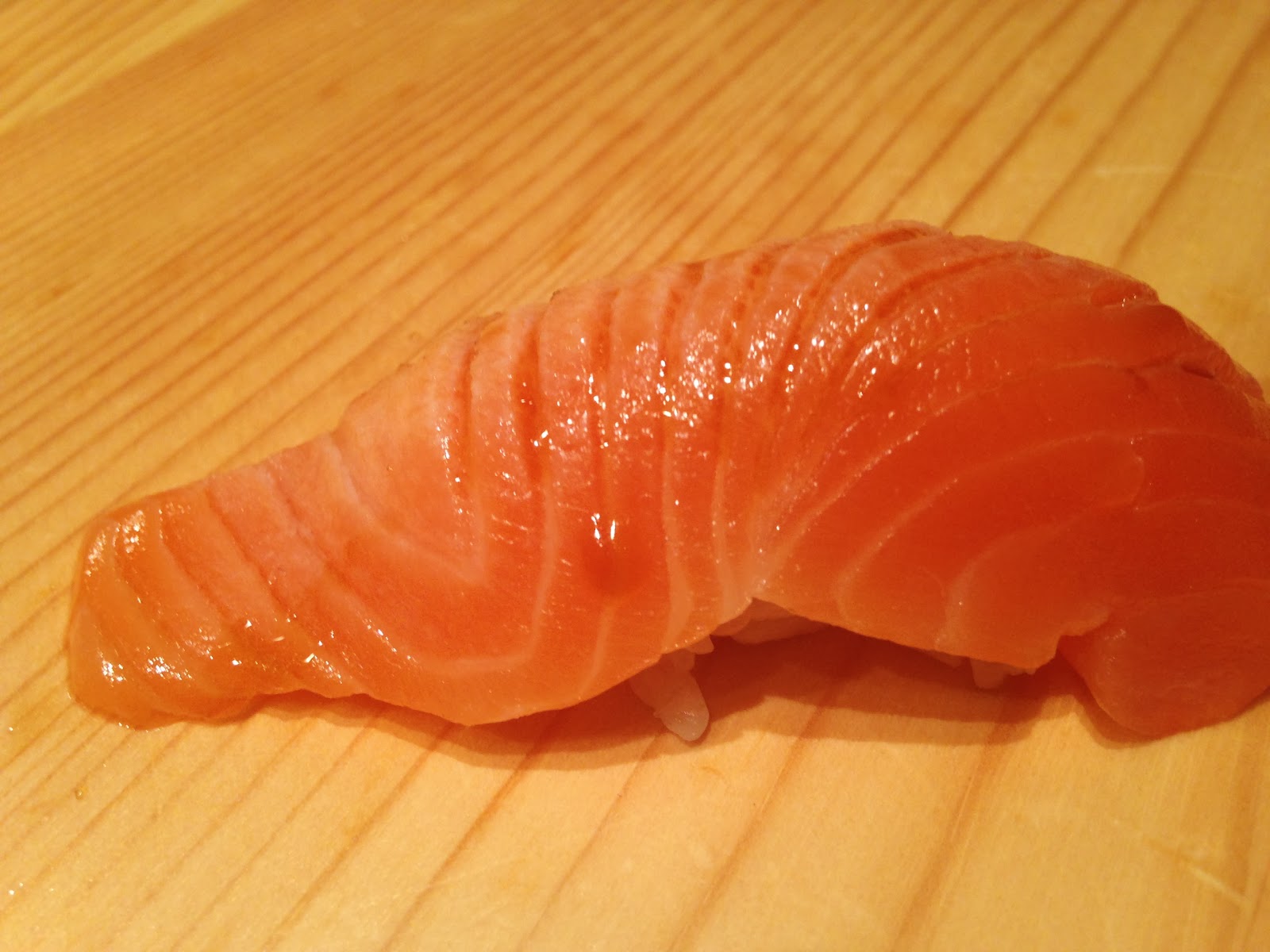 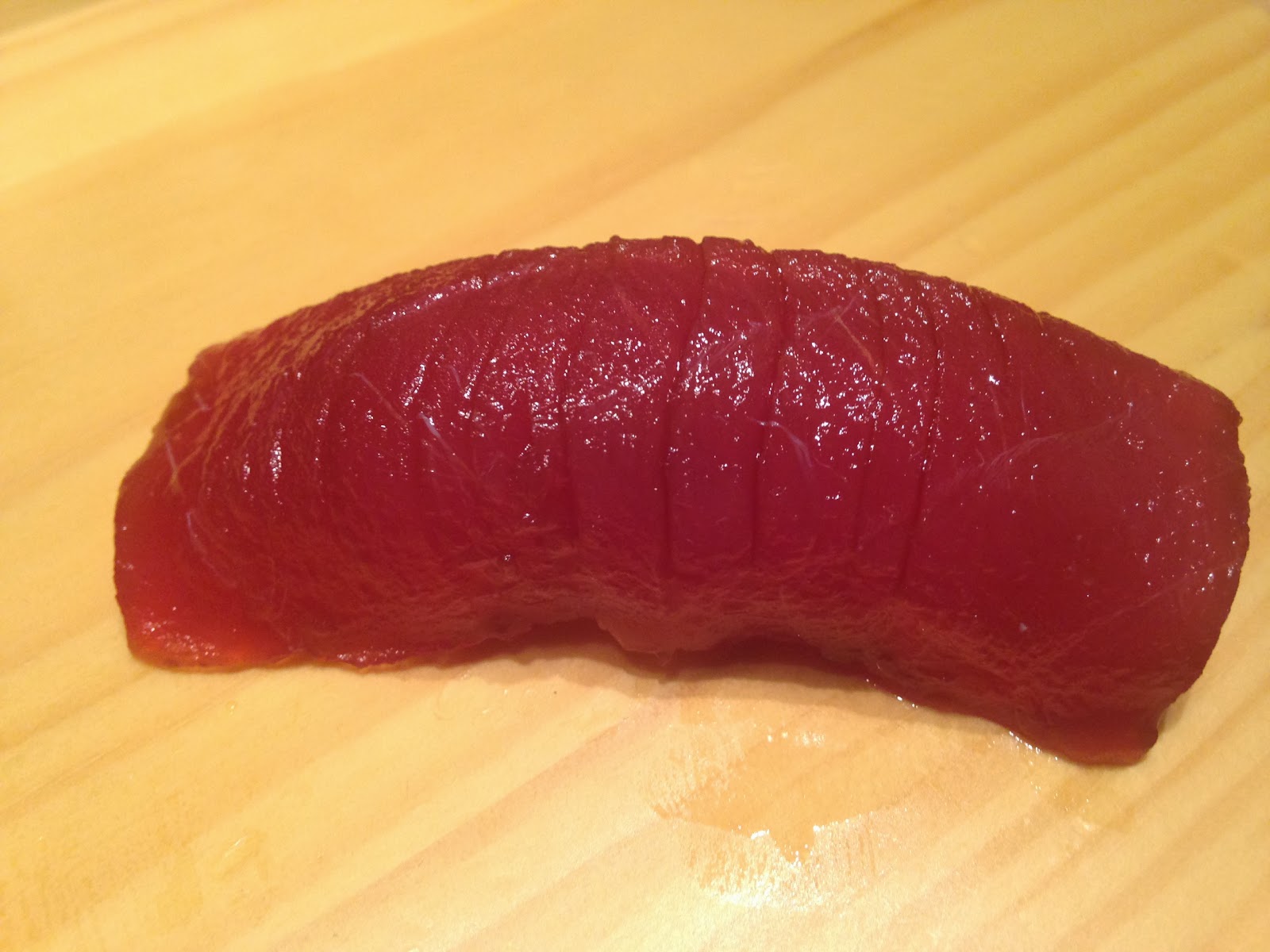 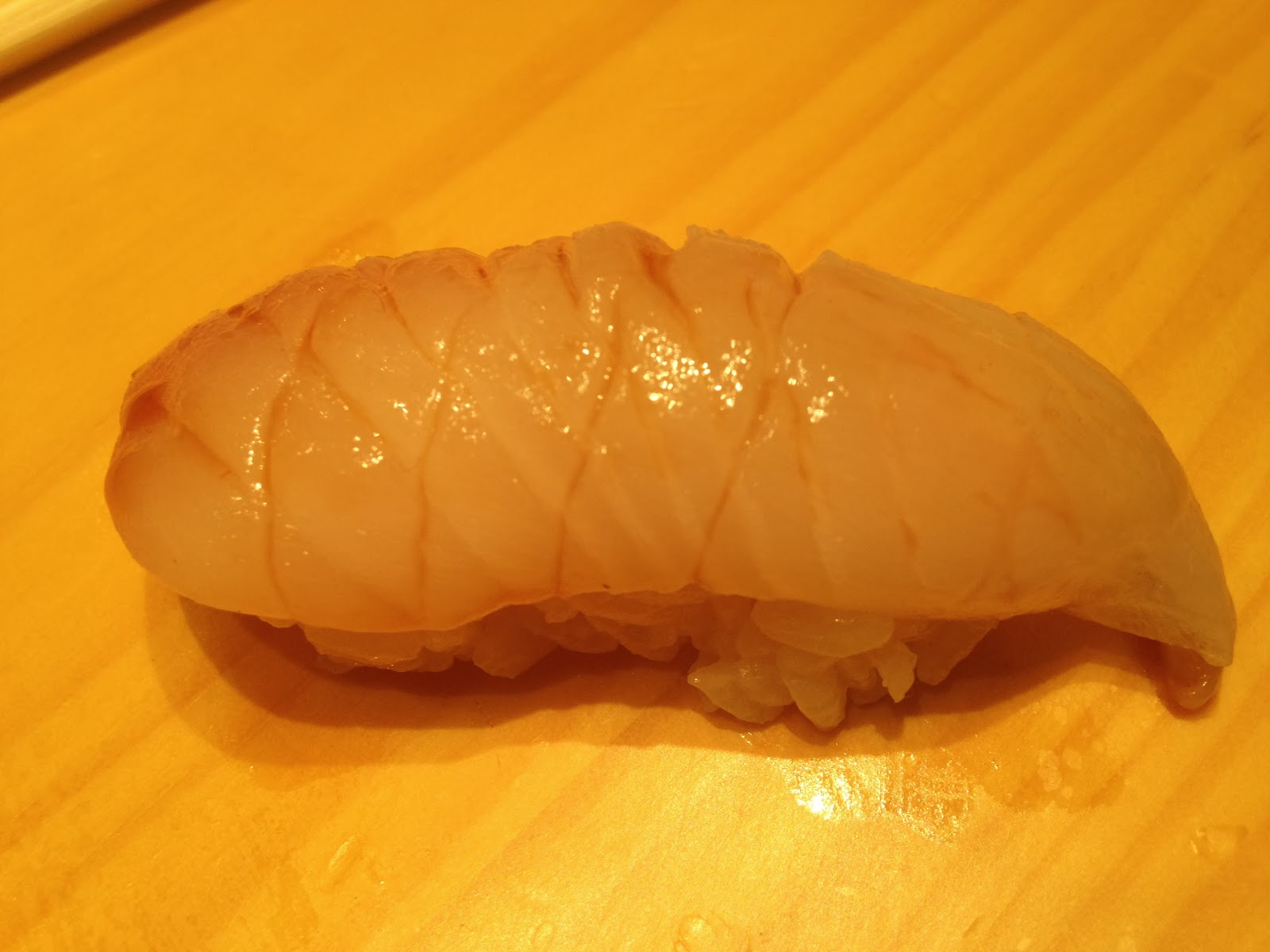 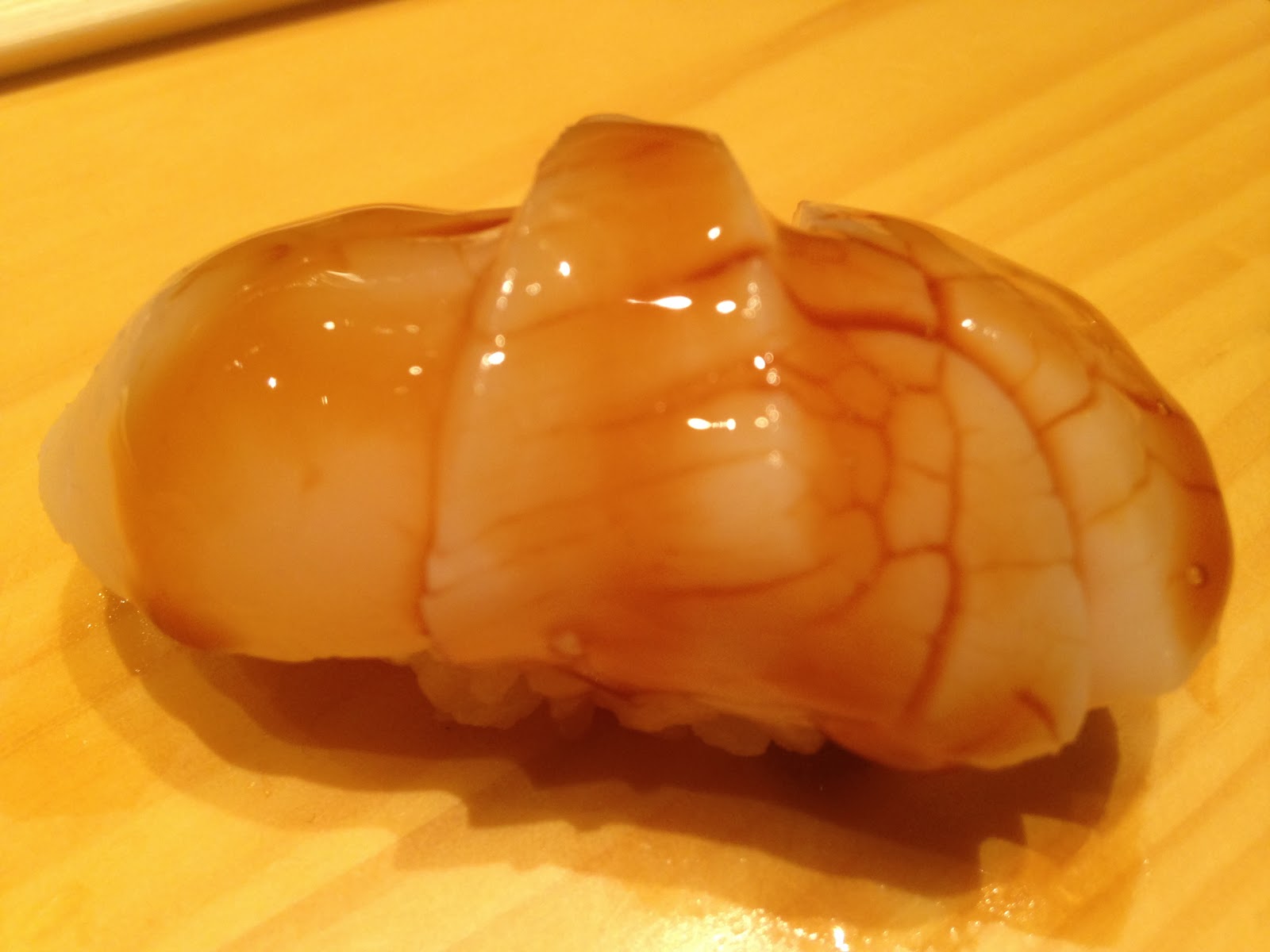 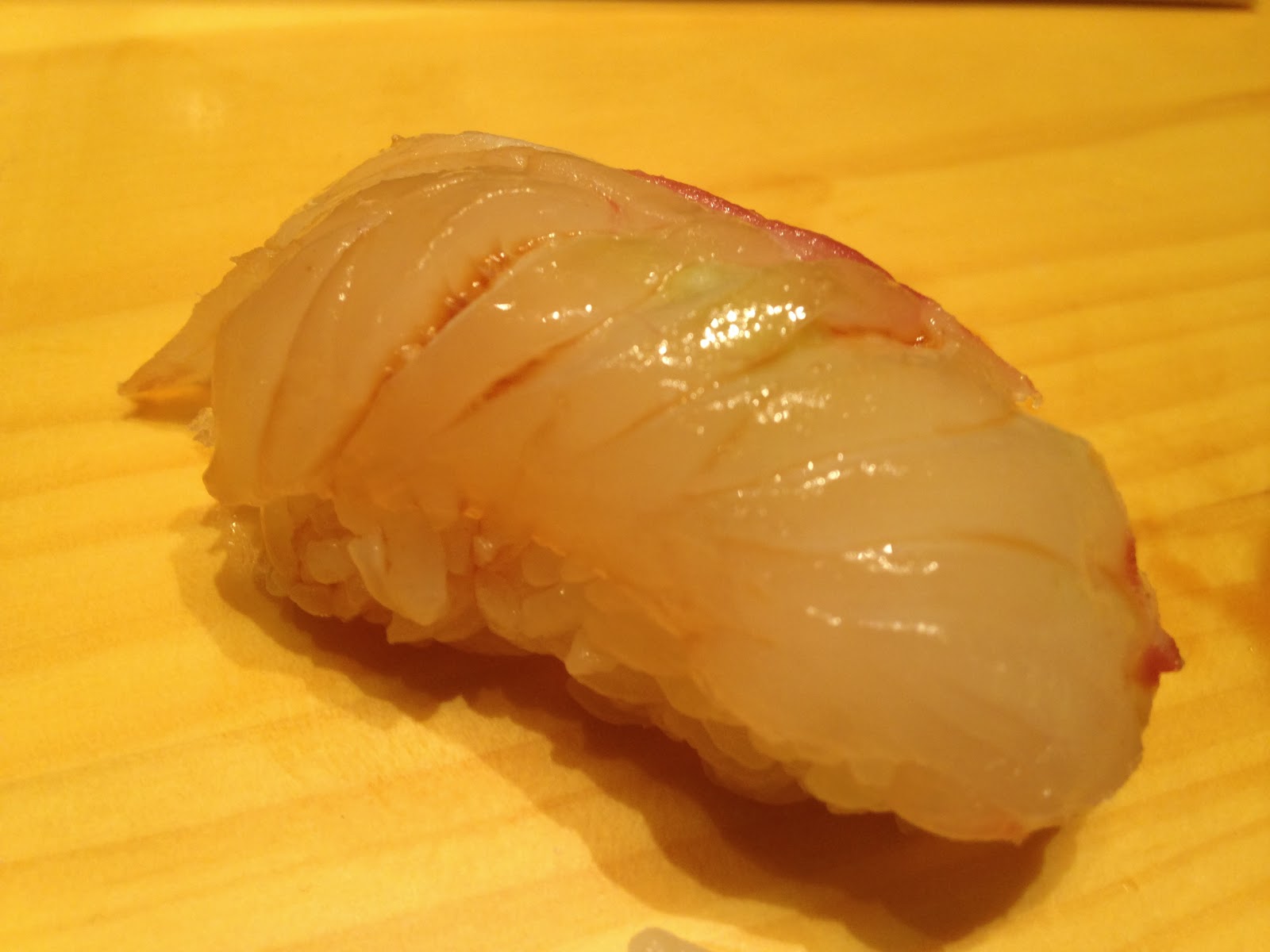 Deep Sea Snapper (for me) 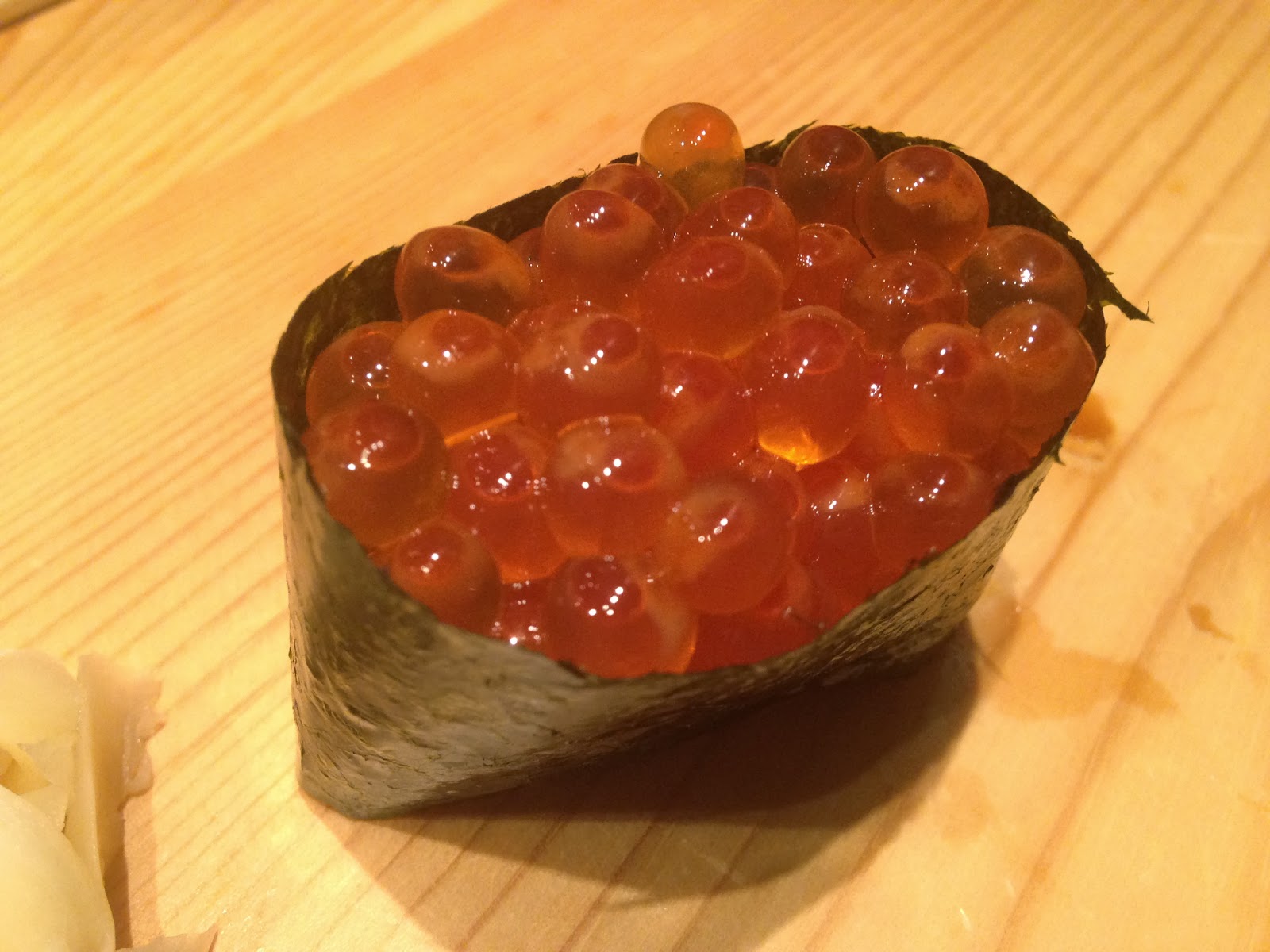 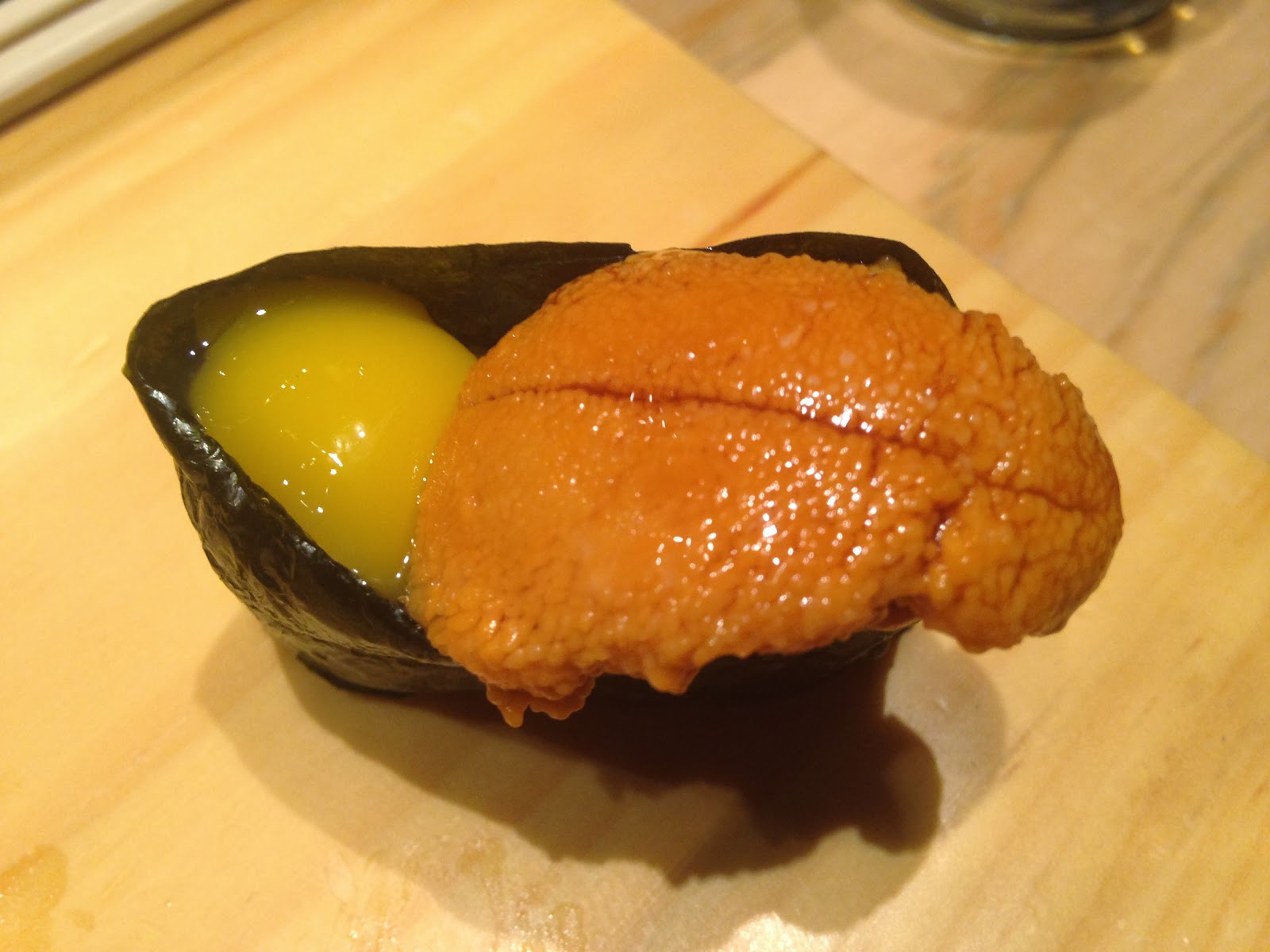 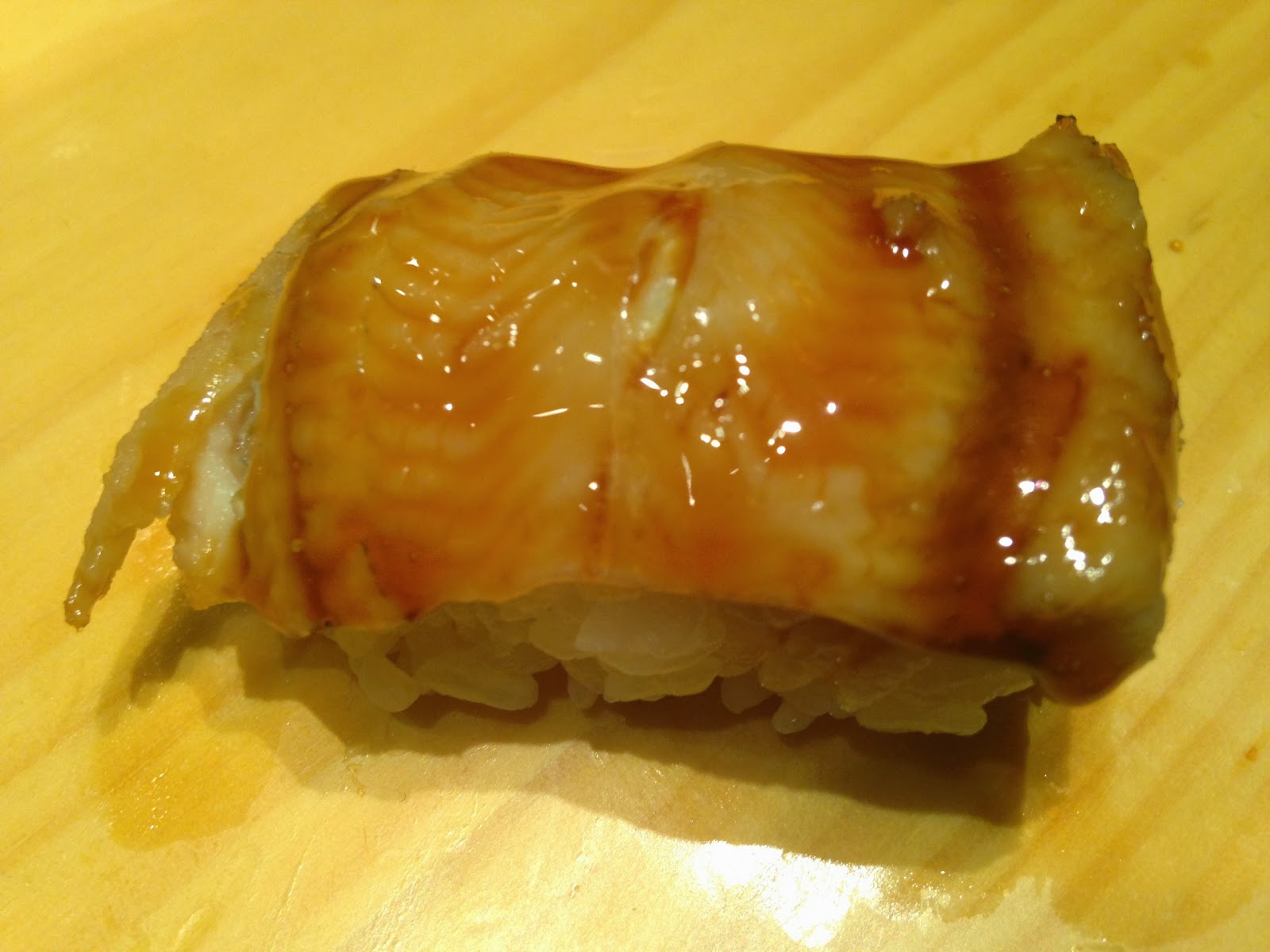 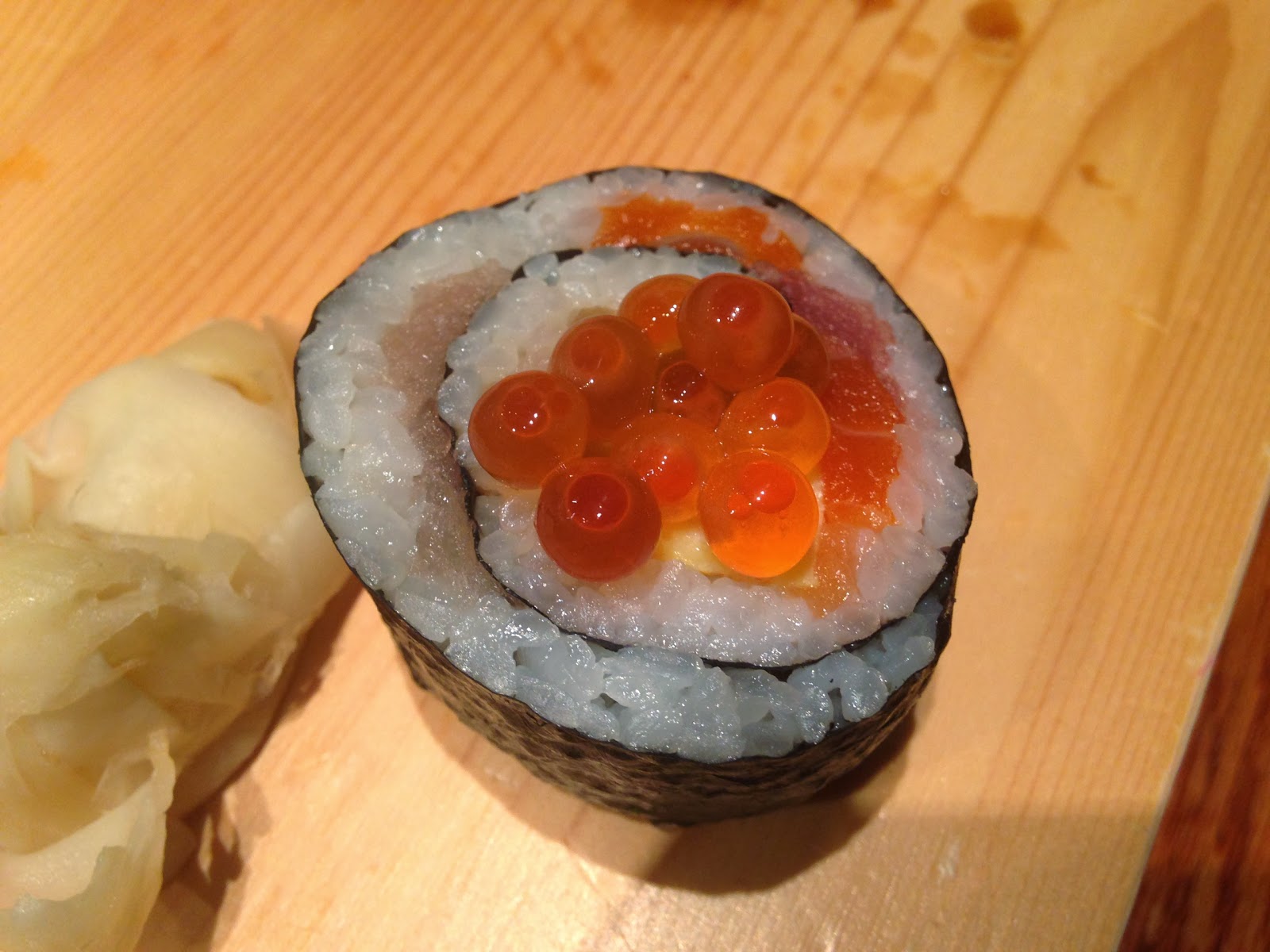 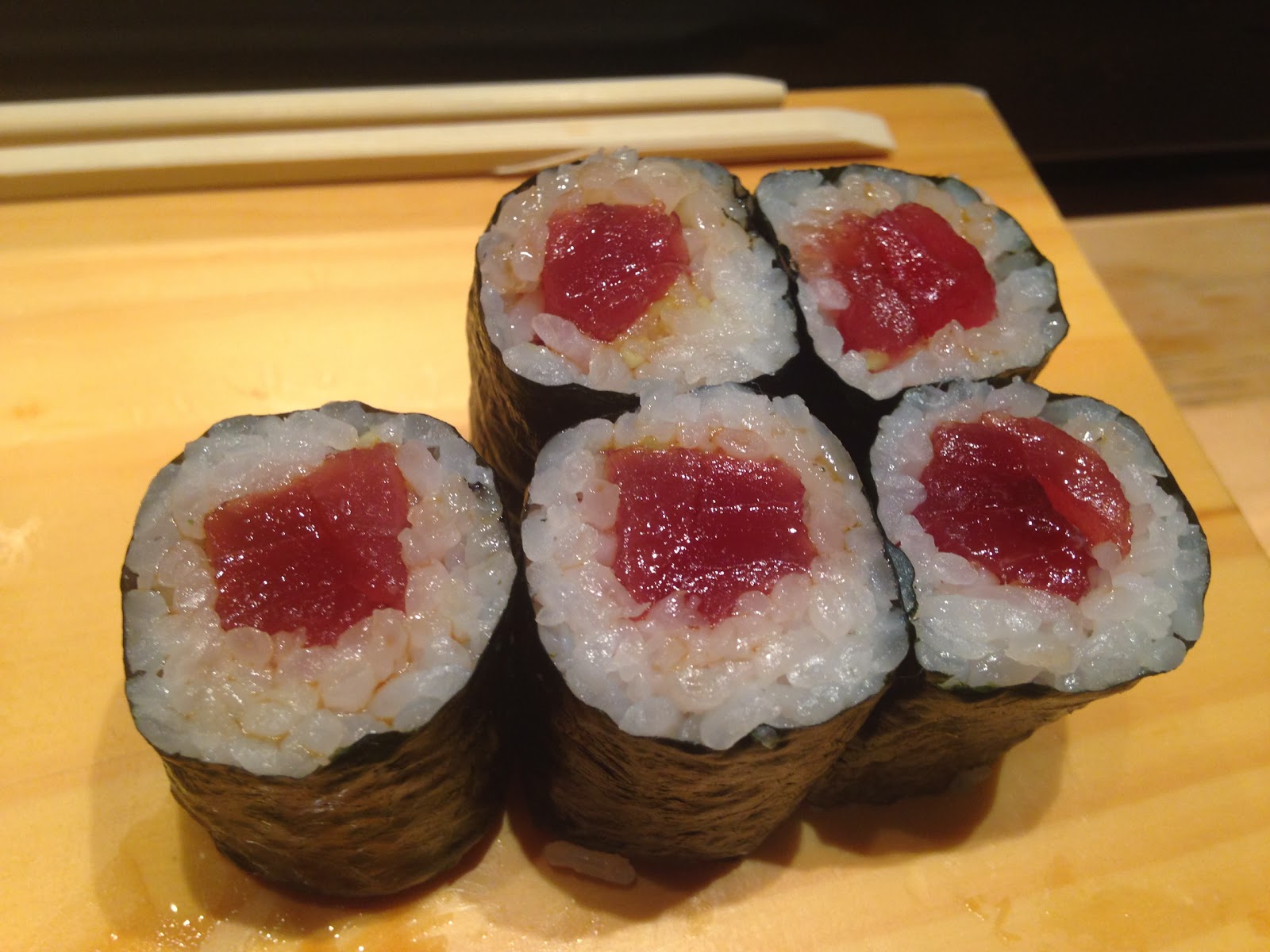 Tuna Roll (for me) 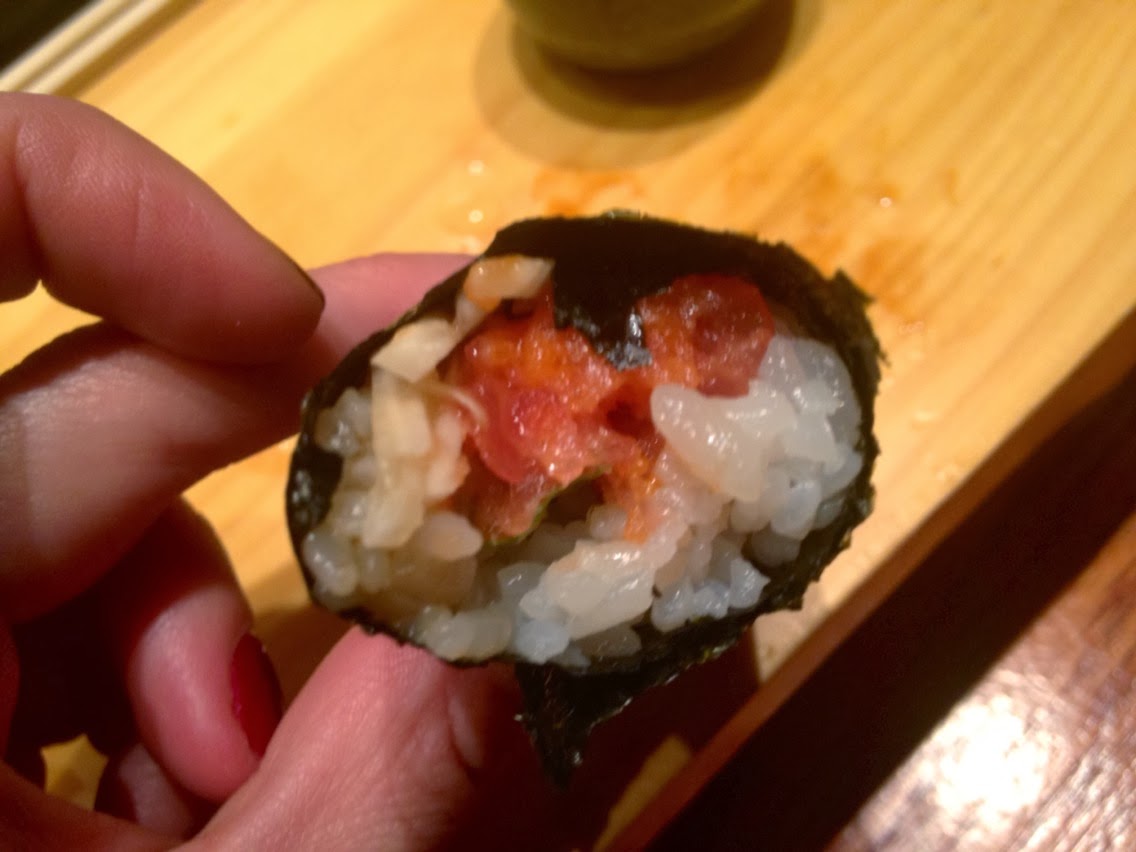 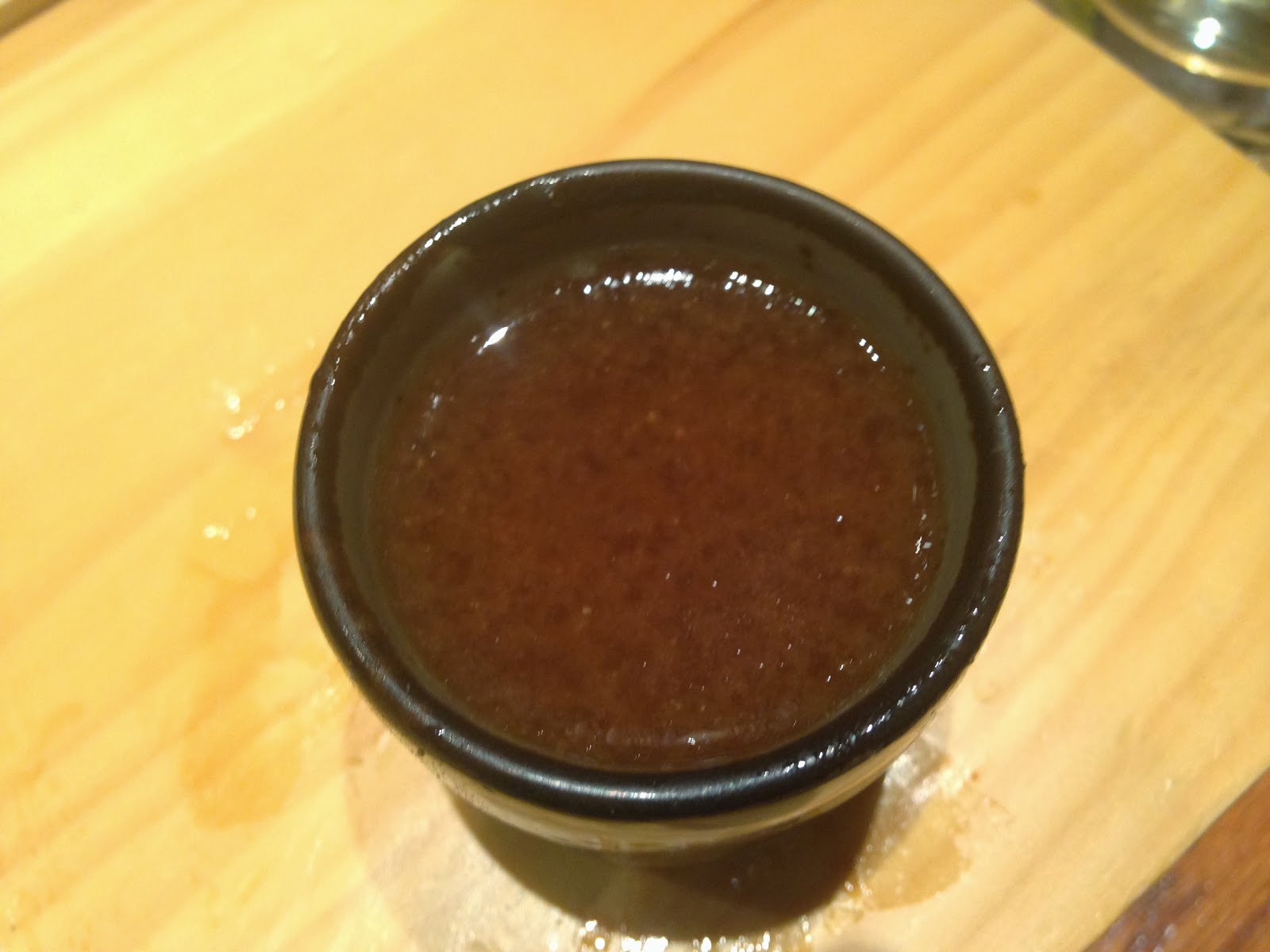 Everything was fabulous from start to finish.  The poached scallop was incredible...I've never had a piece of fish that tasted that sweet in my entire life.  The Santa Barbera Sea Urchin with Quail Egg was like some sort of sushi crack.  It tasted every bit as luscious and decadent as it sounds only better.  The only time I was a bit hesitant during the meal was when presented with the Firefly Squid.   Then chef gently said to me "this is a sign spring has come" and for some reason I knew there was nothing to be hesitant about. I happily sucked it down and could have gone for another.  We were so full at the end but had to have just one more piece before calling it a day... 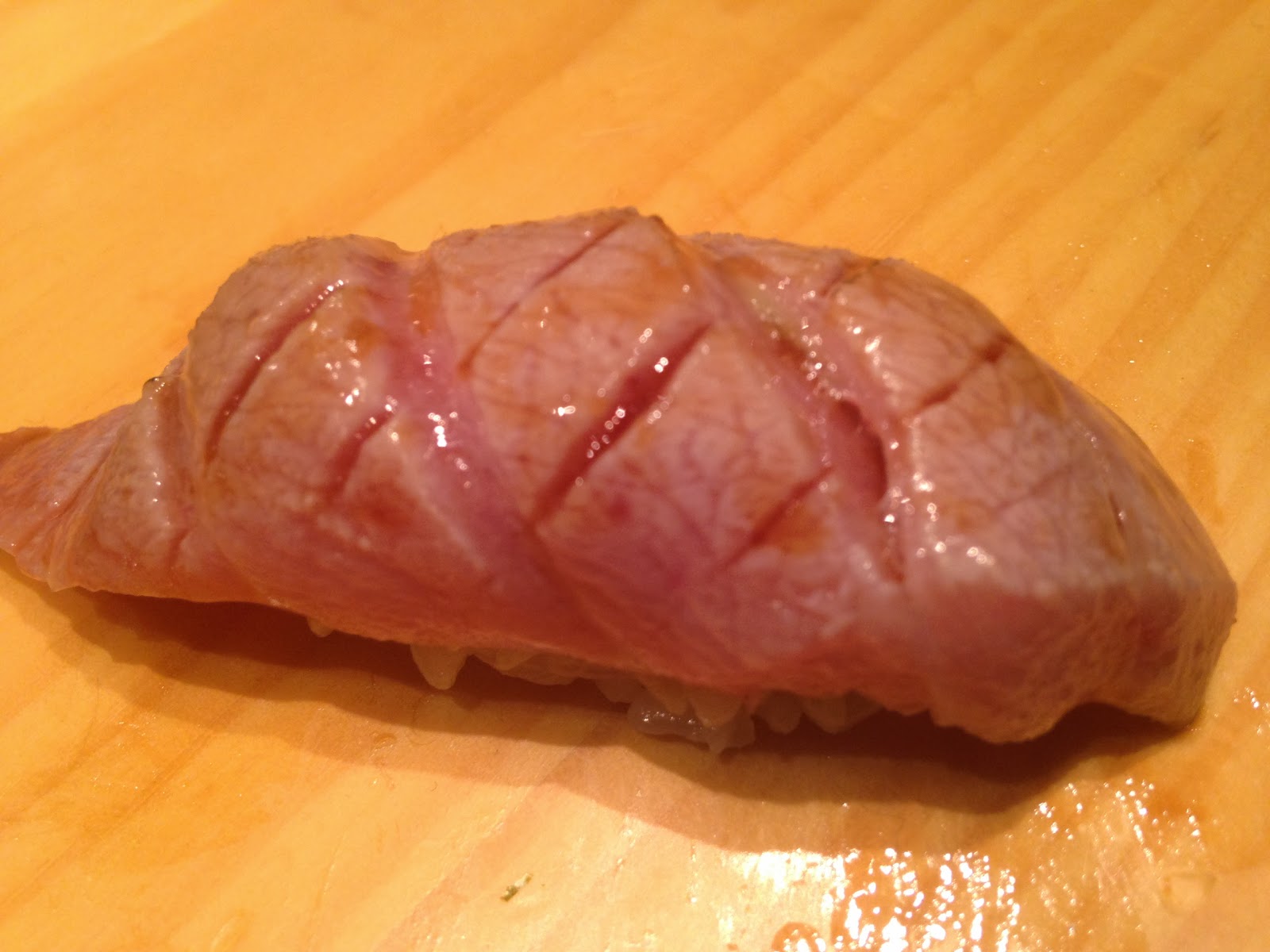 ...Fatty Tuna for the finish!  This was simply outstanding- all of this amazing sushi for a total bill of right around $210 for the two of us.  Since it's BYOB we brought in a few of our own drinks...a Pliny to enjoy with the appetizers and bottle of Louis Jadot Pouilly- Fuisse for the omakase. 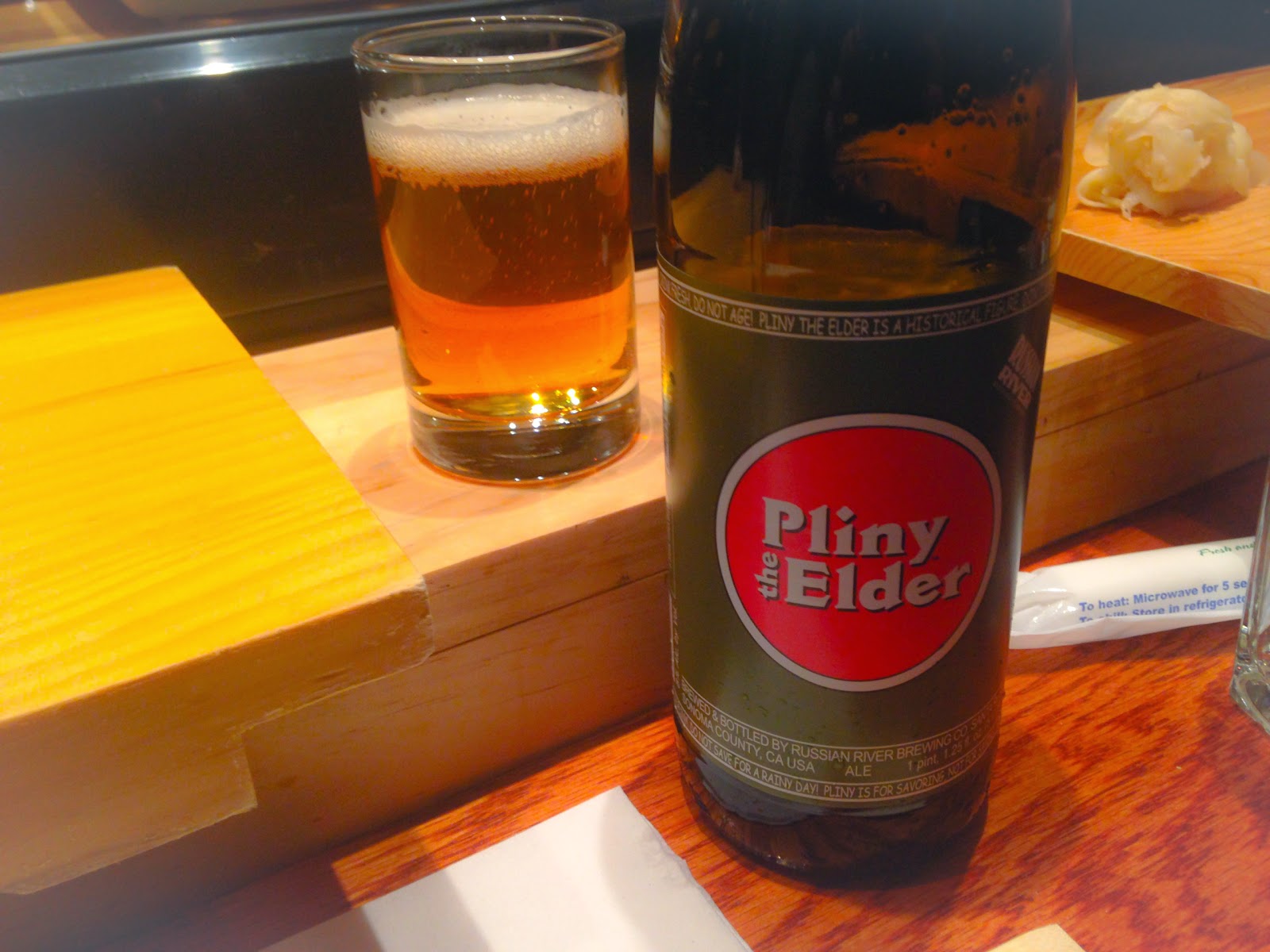 It was a fabulous dinner which concluded with some Happy Anniversary wishes from the chefs before heading out into the chilly night air.