March 04, 2014
Let me start this review by saying I love Wylie Dufresne.  The meals I've had at WD-50 were some of the most creative, thoughtful and delicious dinners I've ever had the pleasure of enjoying.  So when his newest restaurant Alder opened in the East Village I was incredibly excited to see what crazy concoctions he'd be rolling out of the kitchen.  I grabbed my friend Christine and Mr. T and off we went.  Unfortunately my experience at brunch is what I can only describe as a complete and utter failure.  Let's begin with the Pizza Bagels. 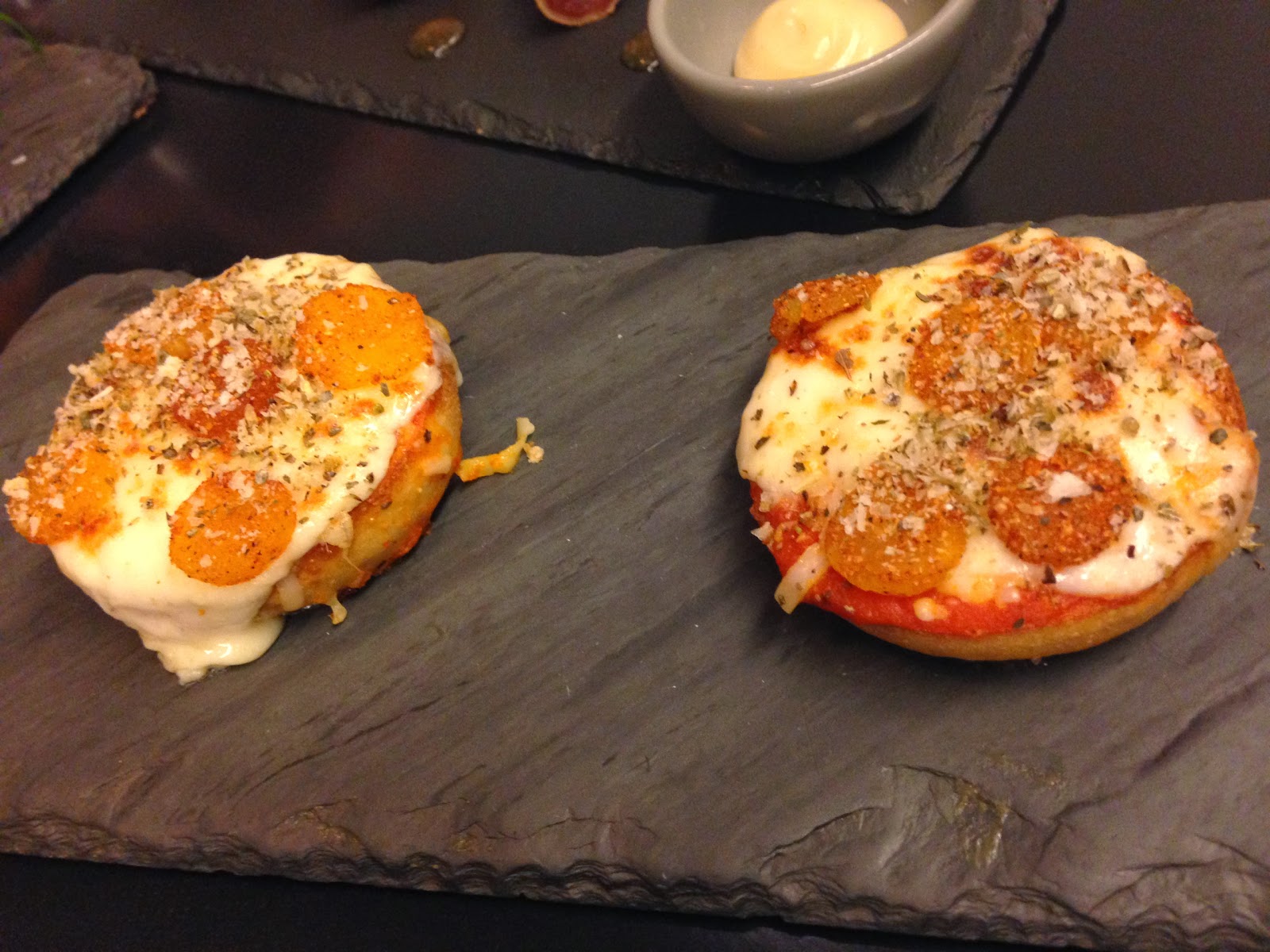 Have you ever had frozen Bagel Bites before?  Then you already know exactly what this dish tastes like...spongy dough, grainy cheese and a strange flavor I can only describe as wet cardboard. 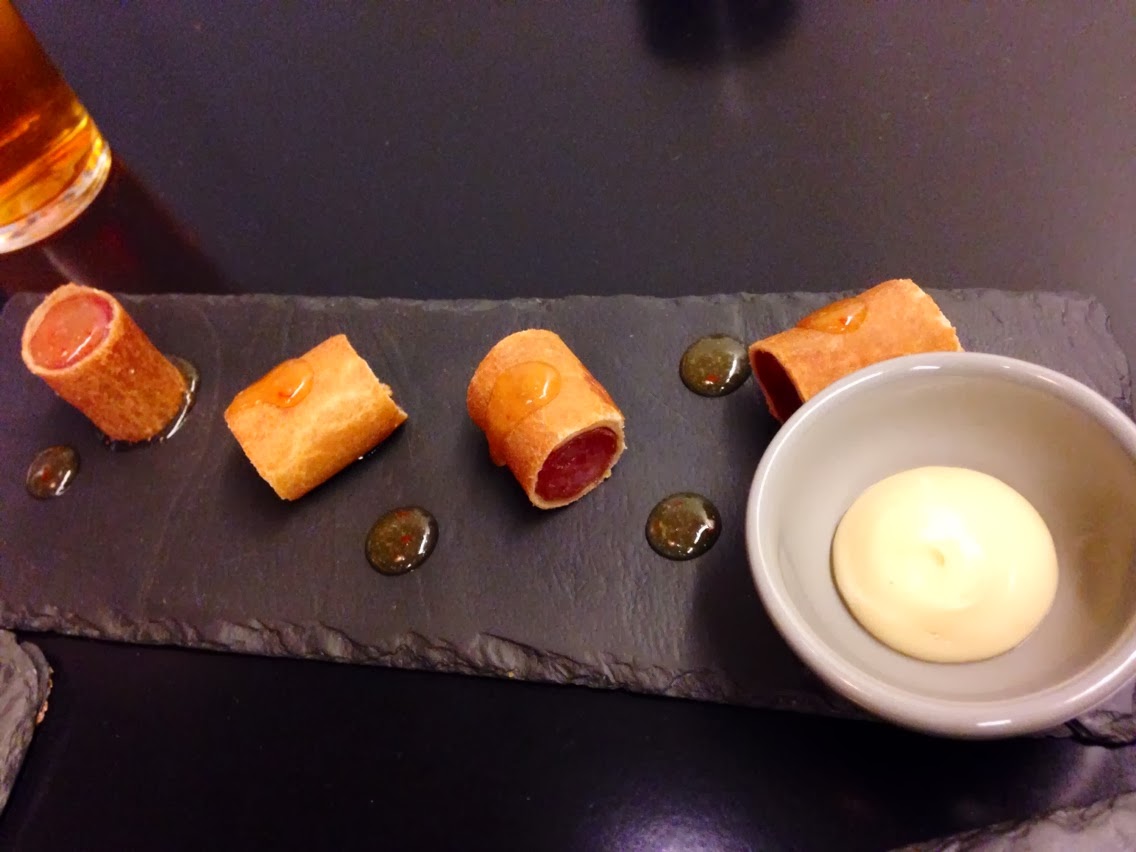 The Pigs in a Blanket followed the same suit.  The outer casing was cold and flavorless; the dots of sweet chili sauce comical since they were neither sweet nor spicy.  Honestly this entire dish seemed to be more focused on the artful positioning of the rolls rather than the need to make it taste edible. 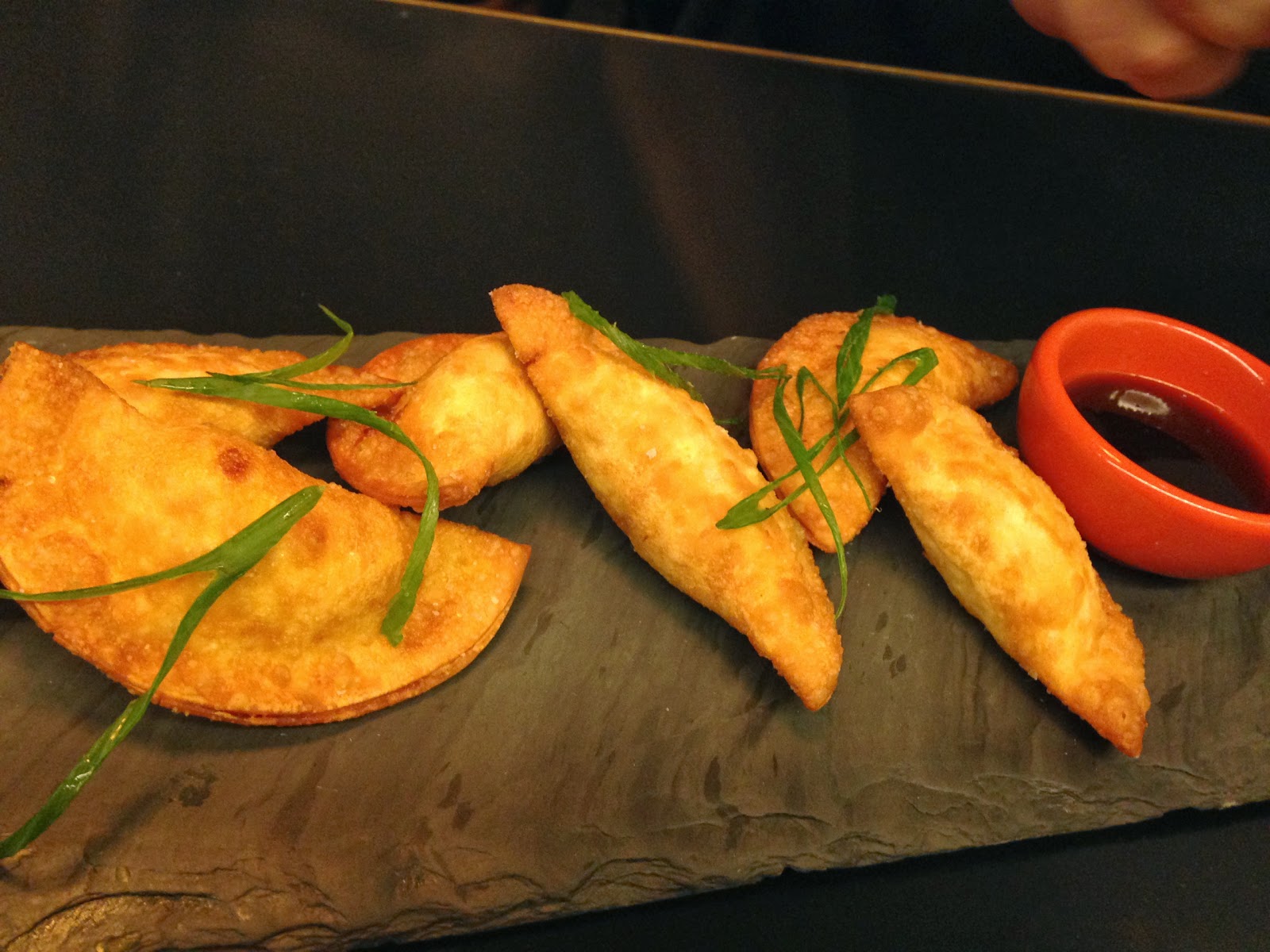 The Bacon, Egg and Cheese Goyza were probably the best of our starters but still disappointing.   The shell was lukewarm and slightly soggy...the only saving grace were the tasty bits of bacon inside. 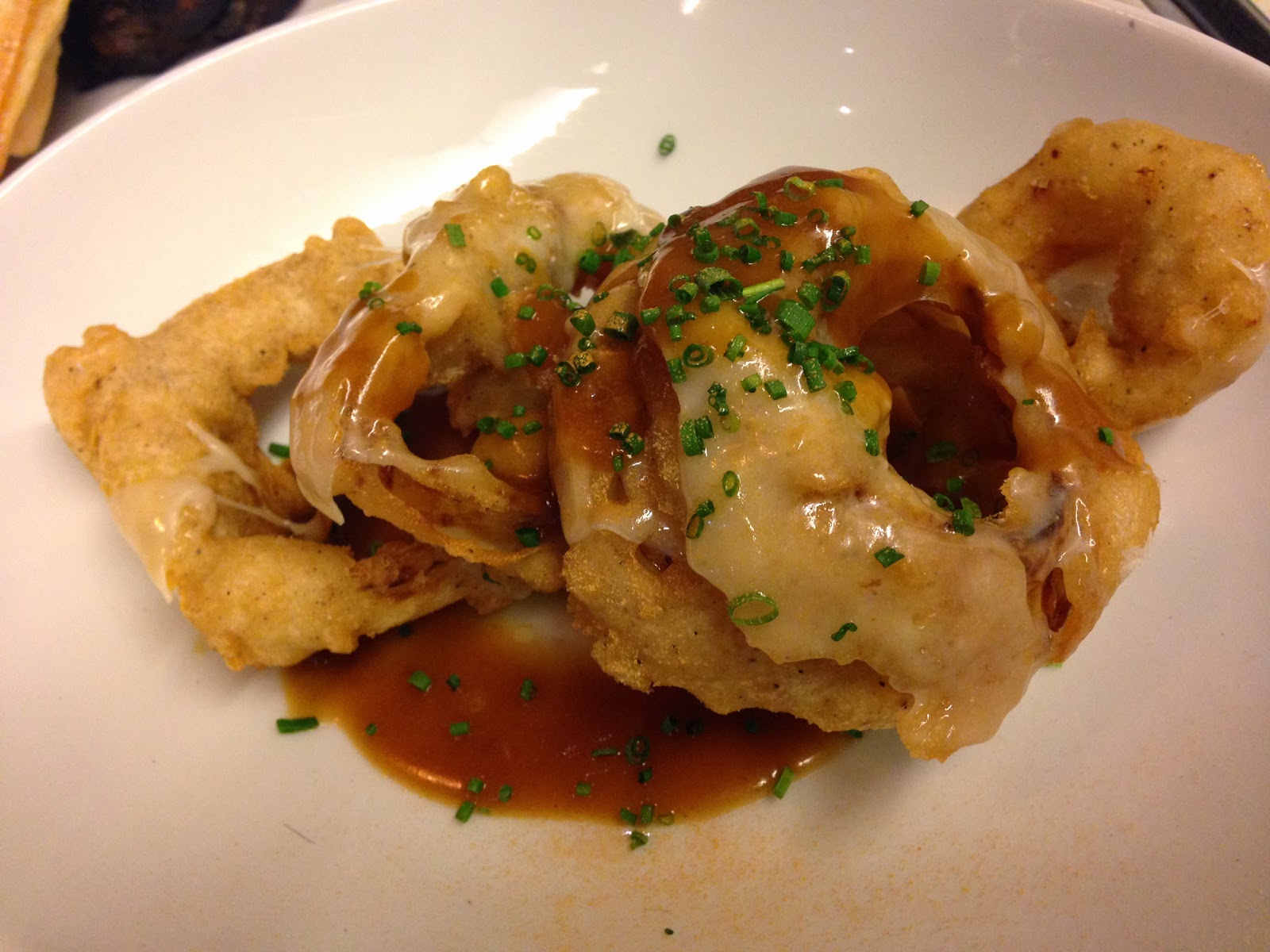 I don't even know what to say about the French Onion Soup Rings. I seriously couldn't find anything forgiving about this lumpy, thick mess of food. 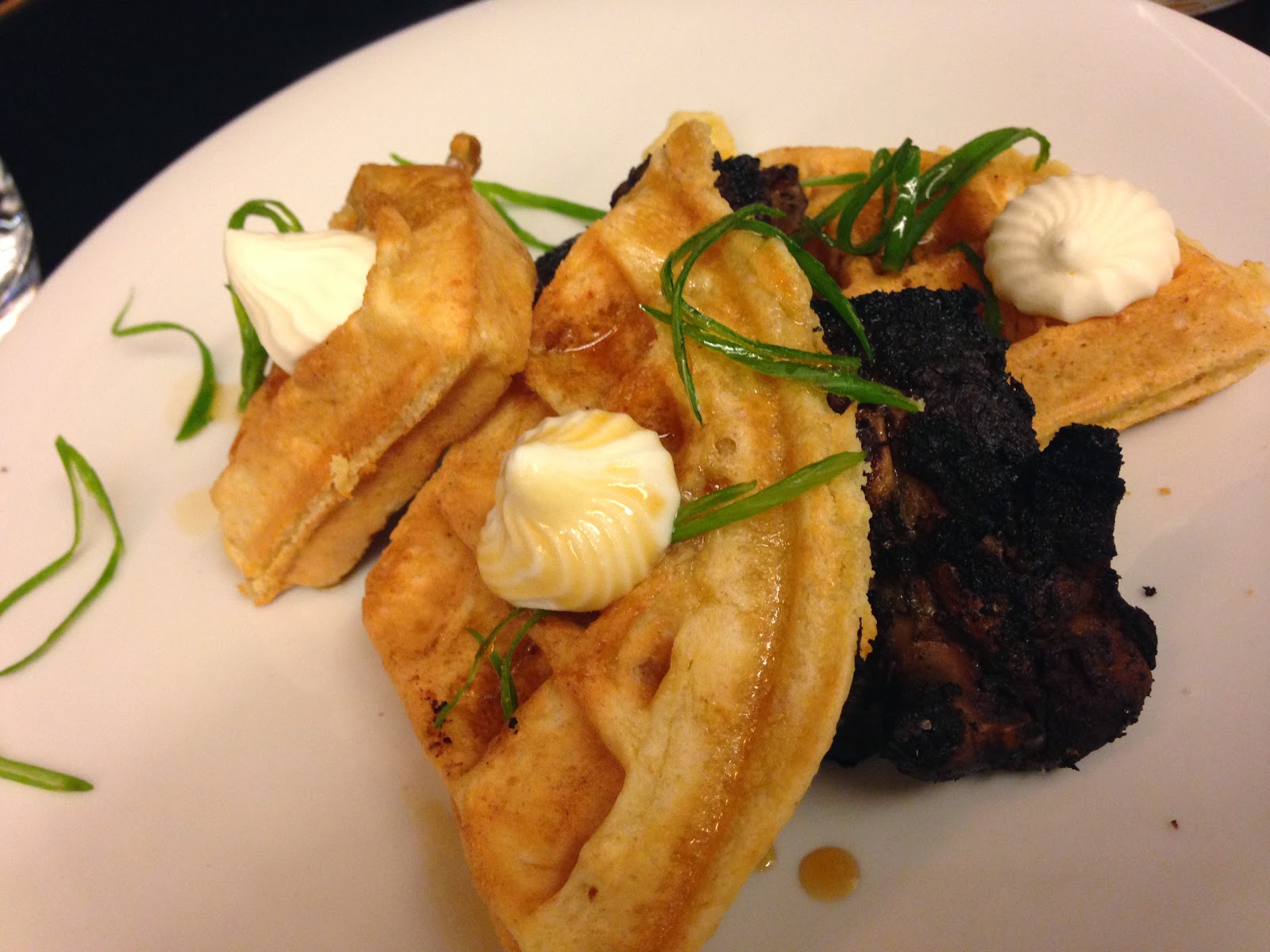 The best part of the meal had to be the Coconut Waffles and Jerk Chicken.  It had a great balance of spicy and sweet and the toasted coconut flavor really shined; although after the disappointment of the previous dishes and the $17 price tag it could only be described as bittersweet.

We passed on dessert, paid our bill and left contemplating a stop at Pommes Frites since the three of us were still hungry.  I'm sad Alder was such a let down and feel the need to take my friend Christine to WD-50 on her next visit to make up for this meal and let Wylie's style really shine.