Restaurant Week at the Strip House

January 19, 2012
Day one of Restaurant Week this year and I started out with a brand new participant- the Strip House.  This place has been around forever but they never participate because they never do lunch.  Well looks like we were going to be one of their first customers trying out both! 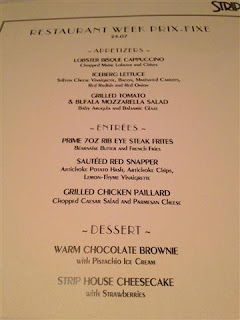 When we got to the restaurant I was a little upset to see a slight change in the desserts from their website menu.  Their Chocolate Layer Cake had been taken off and replaced with a Warm Fudge Brownie.  This may not be a big deal to you but their Layer Cake is legendary for being absolutely enormous and amazing.  I was a little sad about that but didn’t dwell on it.  After all- it was a Monday afternoon and I was having lunch out with my husband- can’t complain about that!  They started us off with some perfectly acceptable but ordinary rolls and then it was onto appetizers where I ordered the Iceberg Lettuce. 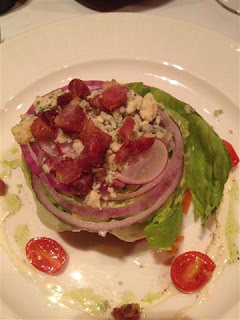 I’m not really sure why they didn’t just call this a Wedge Salad but that’s exactly what it was.  Nice crisp lettuce, thick cubes of bacon and some funky Stilton cheese made this a perfect steakhouse starter.  I just love the simplicity of a wedge salad but one bite of Mr. T’s soup almost had me wishing for an order change. 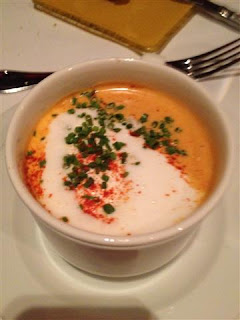 His Lobster Bisque Cappuccino was just wonderful.  The soup was super creamy with huge chunks of Maine Lobster and a healthy flurry of chives on top.  They didn’t skimp on this soup one bit!

Now between courses I have to tell you a little about the atmosphere in here.  My first thought was 80's Vegas Steakhouse.  Honestly.  The red banquettes, naked pictures of women covering the walls and bad 80's music was prominent.  I have to say it kind of made me laugh.  I could see why this would be fun if it was a late weekend night rather than 1:30 on a Monday.  Anyway- onto entrees. We actually went the same route here and both ordered the Rib Eye Steak Frites. 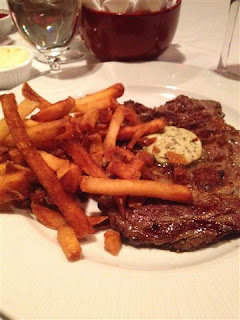 This sizzling steak came out topped with a dollop of béarnaise butter and some crispy French fries on the side.  Since the Ribeye was only a 7 oz portion it seemed a little fattier than usual because it wasn’t cut very thick.  However that fat really sealed in the juices and made it extremely tender.  The béarnaise butter was just as rich and fattening as can be and although the fries could have been a bit more uniform they were all delicious.  Now for dessert- I settled for the Chocolate Brownie with Pistachio Ice Cream. 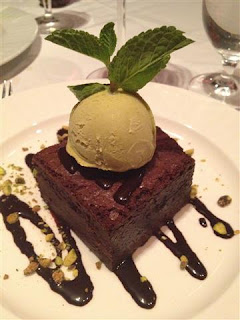 I only settled because the Layer Cake wasn’t there but I have to admit this was pretty darn good.  The brownie had a crisp top and fudgy warm center while the Pistachio Ice cream might possibly be the strongest ice cream I’ve ever had.  This was literally bursting with pistachio flavor and little pieces of slivered nuts were along the bottom of the plate.  Onto Mr. T’s dessert the Strip House Cheesecake. 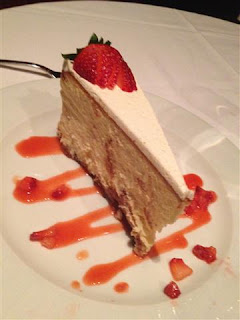 Wow I thought my dessert was massive this was almost Titanic sized!  The cheesecake looked heavy but it was actually quite light and had a great graham cracker crust and super fresh sliced strawberries on top.  Obviously this was much more food than two people can eat at once so we took home some leftovers for later.  Overall we were both more than pleased with our first RW meal.  The total for all of this food and a glass of wine was you under $70.  That's quite a fantastic bargain and a great way to start off the RW winter season.