When Acme, the laid back New Orleans style restaurant in NOHO closed last year, both Mr. T and I were upset.  It’s not that they served the best food in NY but the atmosphere was fun, the waiters were awesome and the food was exactly what you would expect from a southern style place.  So when I heard that Acme was reopening I was incredibly excited.  However this new Acme is different.  So different it may as well be the opposite of “exactly what you would expect”. 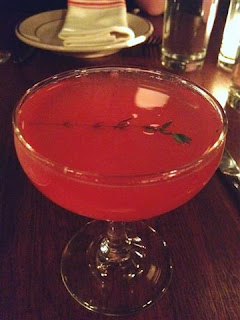 We walked in about 7:30 on Friday night and the entire front area was packed with people.  Luckily we had made a reservation and got a nice table along the side wall.  The first thing you can’t help but notice is the complete change in décor.  The kitschy restaurant had been transformed into a dark, sultry place with exposed brick and candlelight.  I started with the Smokin Thyme cocktail made with vodka, mezcal, raspberries and thyme.  I really enjoyed the thyme flavor of my drink but it was nothing compared to the loveliness of Mr. T’s Graffeti green. 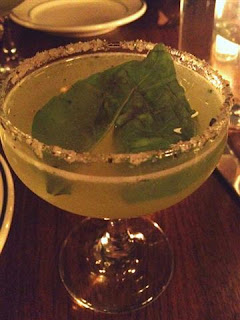 Made from gin, green bell pepper, lime and agave this drink was absolutely perfect.  It was a great refreshing start to the meal but smooth enough to pair with each dish as well.  After we ordered a nice basket of fluffy sour bread and butter arrived immediately to our table. 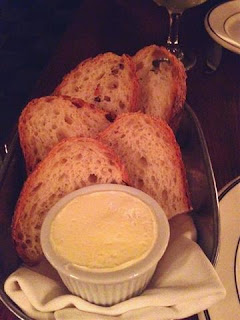 Then it was time for the start of our courses with the Pearl barley and clams. 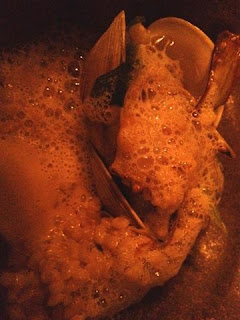 Now I’ll be honest- I’m not a barley lover in the slightest but this little dish completely blew my mind.  The creamy roasted sunflower broth, sweet fish and earthy grains just blended perfectly into an incredibly homey and savory dish.  I mean look at this close up. 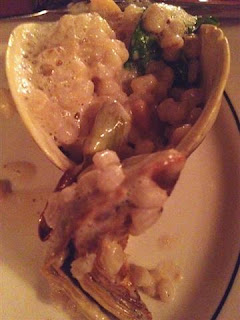 It was amazing!  There were some artichoke hearts in there as well which were a bit to crunchy for me with the broth, but Mr. T ate all of those.  I was just in love with my bowl of barley and broth.   I would never expect so much flavor to come out of these ingredients.  This was my little bowl of happiness. Our next course was the Sweet shrimp and bison with bitter lettuce and white walnuts. 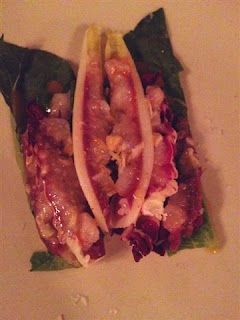 I saw Mr. T make a very strange face when this course was placed in front of him but I was too busy enjoying my bowl of happiness to care.  When I had a chance to try it I loved the zesty and bitter flavors combined on the plate.  It wasn’t until I got home to look at my pictures that I realized uncanny resemblance to something else.  We shall move on…Our main course the Black cod with pickled green tomatoes, cardamom, vanilla and dandelion. 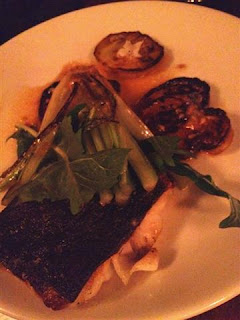 The Black cod was cooked absolutely perfect.  The middle was nice and moist with a salty top and a nice brine from the pickled green tomatoes.  It wasn’t the best black cod I’ve ever had but it was certainly done well.  For sides we enjoyed some Hay roasted sunchokes and Creamy potatoes. 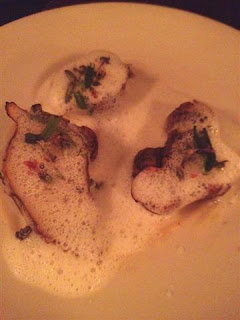 The sunchokes came topped with a New England gruyere and winter truffles which brought this veggie dish to such taste elevations it can only be described as umami.  I would have been happy with eating just this and the barley dish on its own and calling it a day. But then I tired the Creamy Potatoes and had to cave into those as well. 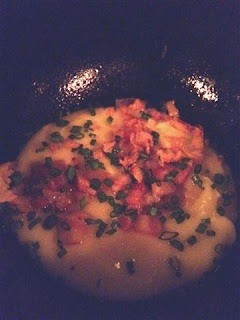 Topped with bacon vinaigrette and baby onion rings these may be the most unhealthy potatoes in the city but my they were quite darn tasty. 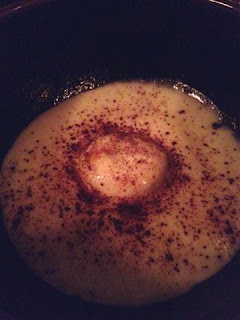 You wouldn’t think we would have room for dessert after this but somehow we did.  Unfortunately the Beer & bread porridge was a complete let down.  I guess both of us were expecting something more along the lines of a bread pudding but this really was more like a soup.  I guess we should have taken the “porridge” aspect more literal but it just didn’t have the texture or flavors to satisfy a dessert craving. 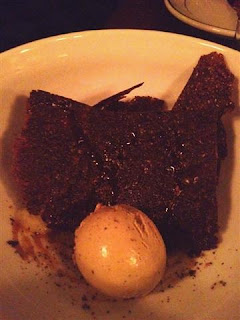 On the other hand my Chocolate crisps with ganache and coffee ice cream was delicious.  I loved shattering the flakes of crispy dark chocolate and mixing in the coffee and caramel.  It was a perfect size and just the right salty and sweet end to my meal.  The total damage for all of this- let’s take a look. 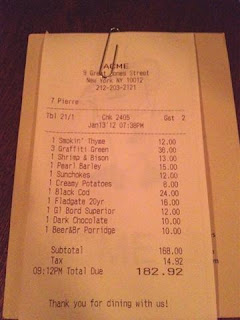 Not bad at all considering the inventive, high quality food, delicious drinks and amazing atmosphere.  I think I enjoyed the new Acme most because it was so different. I know all about the executive chef Mads Refslund (one of the founding partners from Noma in Copenhagen considered one of world’s top restaurants) and his take on New Nordic cooking.  I don’t think what he’s doing here is exactly “New Nordic” but I do know his blend of textures and flavors is extremely unique.  I was truly excited and interested in each dish that was brought out and it was fun to try and guess the elements of each one without looking at the menu. 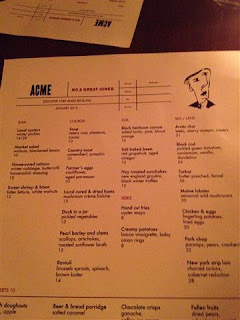 It’s also exciting to have such a great international chef amongst our midst in the middle of little NOHO.  Acme is a welcome addition to the neighborhood.

East Village Eats said…
Thank you so much for this review. I too was saddened when Acme closed, but I'm interested in trying out the new incarnation. Thanks again, this is the first review I've been able to find (& trust me, I've been looking).
January 22, 2012 at 11:37 AM

Roze said…
No Problem! I highly suggest going soon. Who knows how long he will stay around as the chef and being so close to the East Village you could just swing by and get a bar seat. Enjoy!
January 22, 2012 at 4:27 PM