October 09, 2013
It was the 8th year for the Star Chef's International Congress and a big one, as the four day event moved to a new space at Pier 57 and introduced a hard core theme: Guts and Glory, Leaving It All on the Line. 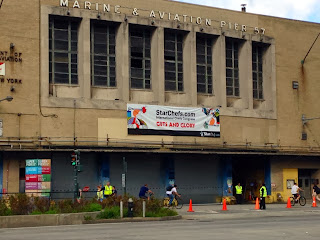 The buzz in the building was incredible.  There was so much to see and do...check out the main stage where chefs like Francois Payard and Bryan Voltaggio were presenting, peek in on a round of the pastry competition and Somm Slam or maybe have a private tasting at one of the various pop up sessions.  I did a little bit of everything over the course of the event...let's check out some of the best of the savory dishes.

This was an international event but I have to say some of my favorites food on display were from NYC like this Smoked Yukon Potato Puree with Brussels Sprout, Carrots and Country Ham from Maysville... 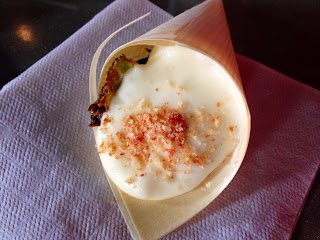 ...and the decadent Poutine from Mile End draped in some of the best gravy I've ever had in my life. 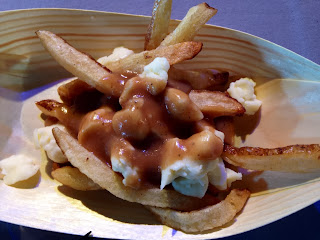 Another favorite was from Leah Cohen of Pig and Khao who was frying up some Southern Curry Chicken Wings with pickled watermelon rind. 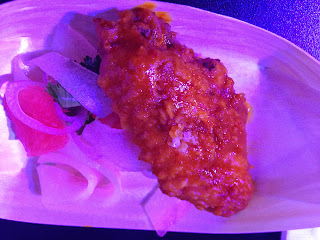 The chicken had an excellent spicy crunch cooled with flecks of coconut.   I can't believe I haven't been to her place for a full fledged meal yet. 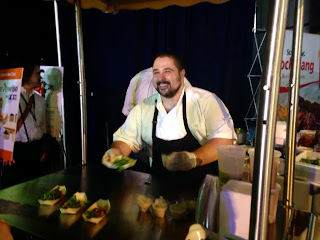 David Santos of Louro was dishing out a delectable Lambs Tongue Salad with Chilled Portuguese Horchata... 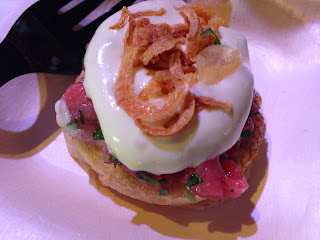 ...and the Cannibal was serving up an old favorite Steak Tartare with crispy onions and Bearnaise. 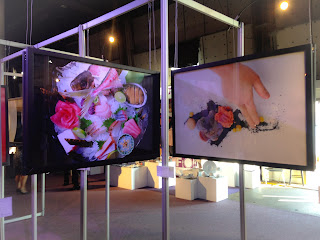 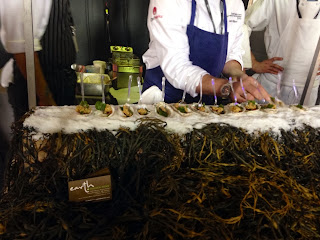 Meanwhile another Maine place was really wowing the crowd.  Justin Walker from Kennebunkport created a Fried Winter Point Oyster with Padron Pepper Relish, Bacon and Nepitella that was so tasty it completely changed the way I think about fried oysters forever. 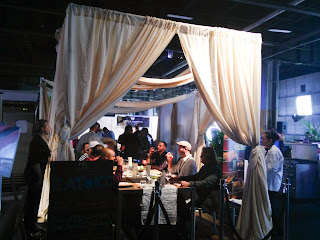 I attended two Pop Ups the first of which was a savory by David Bazirgan from Fifth Floor in San Francisco.  The three course meal began with a Goat Tartare of mission figs, goat milk curds, urfa chile, argan oil and lavash. 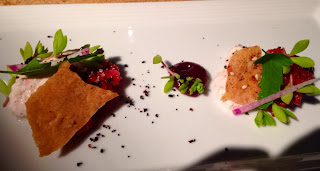 Then onto a crazy Uni Flan with aged Kaffir Lime, saffron, crab and Szechuan Pepper. 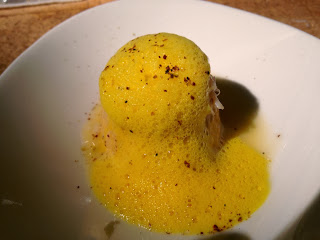 OMG this dish insane. I really couldn't form any words while eating it and kind of just zoned out for a while.   The uni and crab almost melted together into a custard with Szechuan pepper and lime completely playing tricks on my taste buds with the spicy/citrusy combo.  If it ended there I would have been complete but there was still one more dish Australian Beef Wagyu Culotte with eggplant, tomato and beef tenderloin. 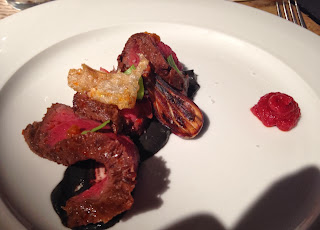 The meat had gorgeous marbling and such rich, tender flavor.  If the sauce underneath had a little less squid ink it would have been perfect, but was still fabulous nonetheless.  I could barley move after all this food and headed home to get ready for the next days events...let's go Sweet!