October 22, 2013
As I was continuing to celebrate my birthday last month Mr. T and I met up for dinner one night in Tribeca at the new hot spot Distilled. We grabbed a table outside on the deck and snacked on a bowl of cumin popcorn as we perused the menu. 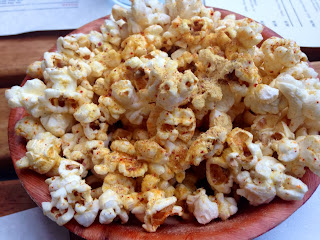 The wings here have been getting a ton of press so we began with a small order to share. 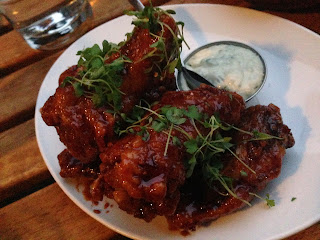 They're big and crunchy with a lot less fat than a regular Korean BBQ wing but with a thicker sauce.  These were quite tasty but we both found the sauce a bit too sweet.  I probably wouldn't be able to eat more than two or three so a small order to share was perfect. 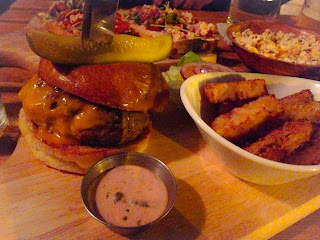 The Franklin Burger was fantastic... thick and juicy with melted cheddar cheese and a buttery toasted bun. The tater tots were a bit strange.  They reminded me more of French Toast Sicks; sweet and cake like instead of salty and crisp but Mr.T seemed to like them. 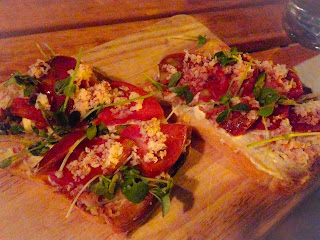 I would probably pass on the BLT next time.  I love tomatoes but these overtook the entire dish and the fatty, bacon flavor was lost in the mix.

I have to mention that the service at Distilled was stellar.  It was a busy Friday night and I never felt rushed or ignored and everyone I met with seemed incredibly friendly.  Mr. T and I planned to have dessert  but we were too full at the end of the meal.  Instead we walked across the street to Brandy Library for a quick cocktail and then retired for the night. A successful evening in Tribeca.