September 10, 2013
We woke up day two of our trip and quickly walked around the city of Portsmouth before hopping back in the car.  We had a LOT to accomplish so it was a bright and early start for our ride up to Freeport and Maine Beer Company. 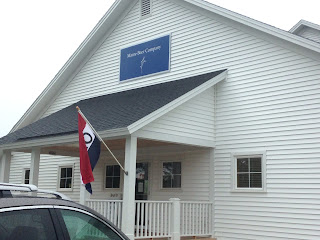 The Freeport Tasting Room was located in a cute old motel space off the main drag.  It was much smaller than I had imagined, with a homey neighborhood feel just perfect for escaping a rainy day. 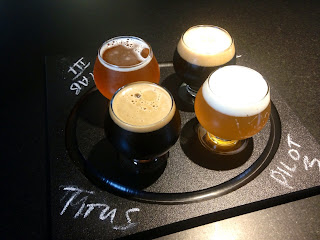 I love just about everything Maine puts out so I went for a flight of beers including two that are brewery only releases.  Everything was fabulous, the beer was super fresh and I loved the sleek serving tray and rounded glassware. 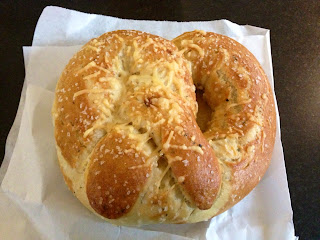 They had a bunch of board games out for people to play and a small assortment of local food options including this delicious Cheddar Pretzel that was still warm from the oven. 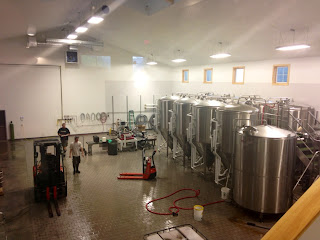 The tasting room looked out onto the brewing floor where some work was being done.  I honestly could have stayed there all day sipping beer and watching the rain outside, but one can't live on beer and pretzel alone.  I needed to start cramming in the lobster rolls, so it was up to Jameson Tavern. 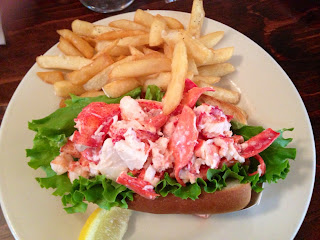 Apparently everyone who was shopping at L.L. Bean across the street decided to come here for lunch and it was absolutely packed.  We had to wait for a spot to open up and when we finally ate the lobster roll wasn't exactly thrilling.  There was a lot of lobster meat but it was totally devoid of flavor...no butter, celery seed, salt...only a tiny smatter of mayo which didn't seem to even help the meat. 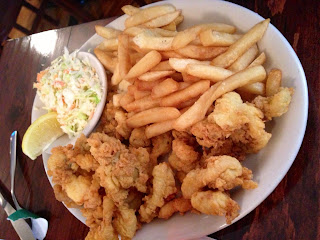 Mr. T's Fried Clams were a bit better.  They had a nice crunch to the outside although I found the breading to be a bit too much.  The best part of our entire lunch ended up being the Clam Chowder. 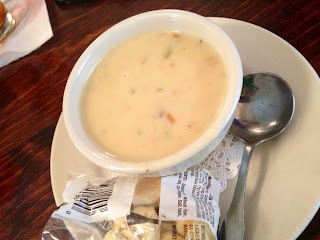 This had wonderful flavor...big pieces of plump clam, no potatoes in sight and a slightly thinner broth than most clam chowders so I left feeling satisfied instead of weighed down.  We left Jameson's and decided to make one last detour before heading into Portland at The Lion's Pride, sister pub to one of the best bars in the world Ebenezer. 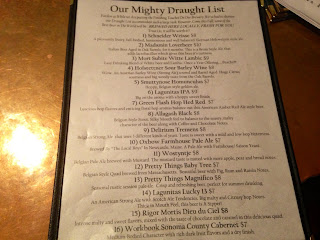 It was the middle of the afternoon so unfortunately the place was pretty dead.  We took a look at the draft list and finally decided just to split a local brew before making the trip to our final beer destination of the day- Allagash Brewing. 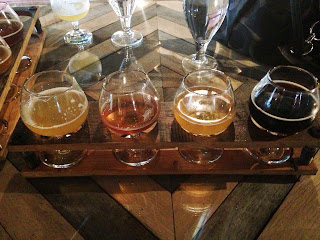 Wow-this place was huge compared to Maine Brewing Company and had an incredible sleek, industrial feel to the inside.  Both of us got a tasting of beers including their incredible Allagash Curieux and then loaded up the car with FV 13's and an entire crate of the Allagash house brew, available only at the site and really delicious.

Then it was into downtown Portland where we dropped off the car, checked into our hotel and freshened up a bit before heading out again to church. 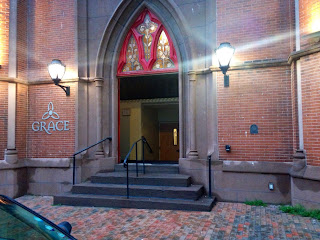 Yes that's right we went to a church...Grace as a matter a fact.  This gorgeous building dates back before the Civil War and when it was no longer in use it was sold and made into an incredible event space as well as a bar and restaurant.  The lower floor hosts a round bar with ample seating for dining on the sides. 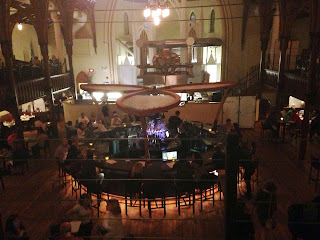 While the upstairs hosted more private events...small get togethers', weddings, etc.  All among the beautiful stained glass windows and incredible wooden archways.  It's truly a unique place. 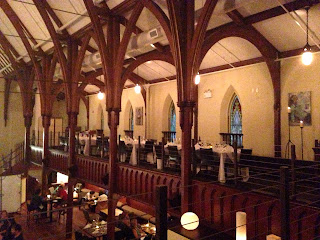 I was just about done with all the beer I could consume in one day so I went for one of their specialty cocktails called "The Saint". 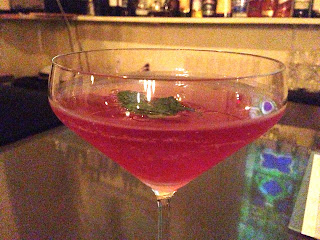 Made with a blend of Cold River Blueberry Vodka, Fresh Lemon and Maine Blueberry Soda this was one refreshing and totally Maine inspired drink.  We were a little bit whacked out from all the driving the past two days so we never ate a full dinner that night but split an appetizer of Halibut Two Ways... 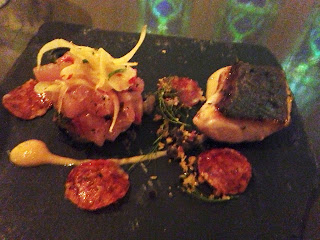 ...one a zesty halibut ceviche and the other a crispy, warm filet....both insanely delicious.

Then it was off to meet up with the rest of our traveling friends nearby at the Thirsty Pig.   We spent the night on their outdoor patio drinking beers and laughing the night away.  It was great to finally be in Portland.