September 09, 2013
Our first trip up to Maine this summer Mr. T and I decided to make it into a beercation complete with stops along the way to check out some of the best breweries and food the coastline has to offer.  Our first day was spent mostly in the car, getting stuck in city traffic then stuck again in a terrible storm but finally we made it to our first destination of the trip WHYM. 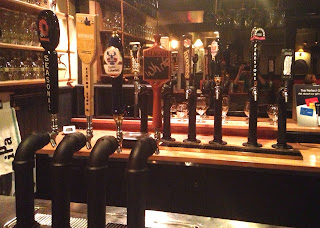 WHYM is a brand new craft beer bar located outside the city of Portsmouth.  The location isn't the greatest...I would be lying if I said Mr. T and I felt completely safe walking up to the front door in the back of an old motor lodge, but once we walked inside the friendly bartender and gorgeous wooden bar made us feel right at home. 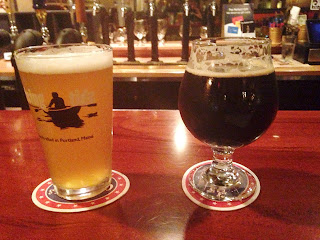 WHYM has it's beer menus split into two sections, one half for the local breweries just down the road and one half for other craft beers throughout the world.  We wanted to focus on local beers so we both ordered a couple from Blue Lobster Brewing the Kolsch and the Excess. Then it was time for some some food.  we hadn't stopped once on the long car ride so we were famished. 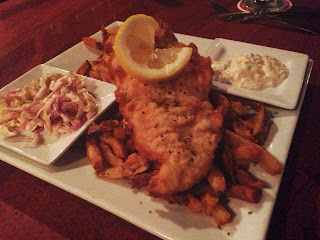 Mr. T had their traditional Fish n' Chips with lots of creamy coleslaw and crispy fries perfect for a healthy douse of malt vinegar.  I ordered the Cesar Salad complete with salty pancetta swirls and crunchy pretzel croutons...talk about a good salad for some beer drinking. 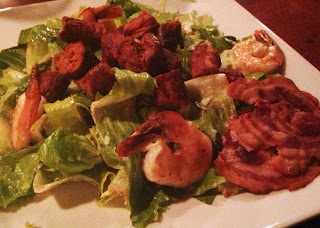 We ended up staying much longer than planned, talking to the owner Alex and learning more about the Maine brewing scene from him and his friends.  Mr. T and I immediately felt at home and this would truly be our neighborhood bar if we lived in Maine.  We wanted to stay there all night but our hotel was in downtown Portsmouth so after our food we left and made our way into the city.  We checked into our hotel, dropped off our bags and took a walk into town to check out Portsmouth Brewery brewpub.  This is one of those places that's always been on my list.  They churned out Kate the Great, one of the most sought after Russian Imperial Stouts in existence, so my hopes for the other beers were high. 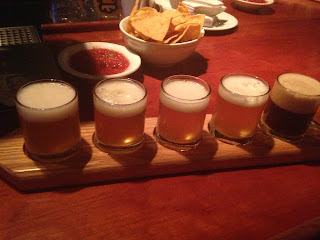 Unfortunately those hopes were dashed...the brewpub looked like a TGI Friday's and the beer was incredibly boring.   We only stayed for one flight before retiring to our room.  So WHYM was a amazing and Portsmouth a bust...it's okay we still had a long trip ahead of us filled with lots of food and beer. Tomorrow was going to be a full day.  Allagash and Maine Brewing Co. at the top of the list!