April 03, 2013
The Flatiron District is getting a ton of new restaurants lately, the newest of which is Barn Joo. Located in the bottom of the Hotel Verite, Barn Joo bills itself as a "Korean Gastropub".  I was really excited to check this place out and I'll start with the positives...the decor is quirky and fun.  As you walk inside, the dining room and walkway are separated by thick hanging ropes and you can peek through to see an enormous moon on the top of the main ceiling.  The menu is small with a list of tapas, rolls and three different varieties of chicken.  I decided to check out their "Fly the Coop" soy garlic wings. 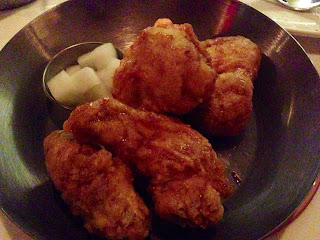 They arrived looking plump and juicy with that distinct golden outside.  The first wing was amazing...more garlic than soy in flavor with an incredibly crunch on the outside and packed with meat.  There was absolutely nothing wrong with the frying of this wing.  Unfortunately my second didn't fare quite as well.  The skin still had that candy like crunch but instead of biting into meat I bit into an enormous chunk of fat and breading. There was so much breading in fact that I got almost no meat at all. 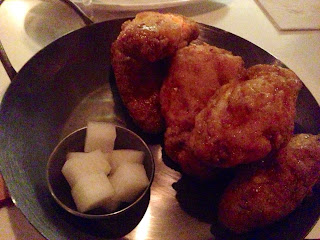 This was the case with about four out of six wings.  Each had the potential to be great but were wildly inconsistent. 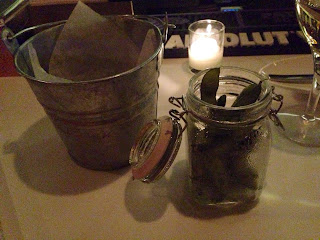 This came with the standard edamame which arrived a few minutes after the chicken.  Since fried chicken always takes about 20 minutes this usually comes as a snack first, but it seemed a bit of an after thought here.  This inconstancy continued in other areas of my meal.  When I arrived they were playing fantastic jazz music that went really well with the quirky atmosphere. Then things changed...the music went from hip hop to Dave Matthews back to hip hop and then to big band.  I've never been in a restaurant that fluctuated it's music so wildly.  The beer list was also a bit of a disappointment.  For a place "Gastropub" I was surprised to see Killians Red and Coors Light as two of the six drafts.

I think Barn Joo overall has potential...it just needs a lesson in consistency.  It will be interesting to see how it does in a few months with all the other new places popping up around the neighborhood.