January 23, 2013
I love how restaurant week always falls at the end of January so I can plan my three day weekend to end with a fabulous lunch.  This year the choice was Locanda Verde, one of my favorite restaurants in the city.  Locanda Verde has everything in my book, gorgeous, bustling atmosphere, fantastic food and now I'll add in a surprisingly great restaurant week menu.  Far too many times restaurants offer only two or three options, Locanda Verde offered almost everything on their regular menu for the 3 course prix fix.  I was so happy Mr. T came along with us so I could try twice as much :) 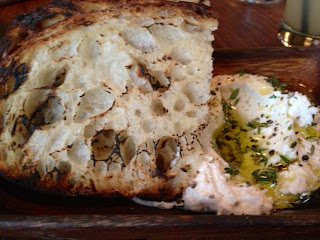 He began with their creamy, rich Sheep's Milk Ricotta appetizer.  It was just as wonderful as always and they certainly didn't skimp on the portion sizes.  My Locanda Salad was absolutely enormous. 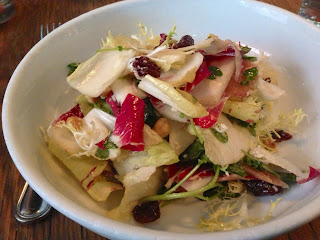 Dried Cherries, speck and a vibrant hazelnut vinaigrette gave this salad a nice, hearty boost.  I truly could have been full with just this as my entree but being restaurant week I had to prep for the next course Fire Roasted Garlic Chicken. 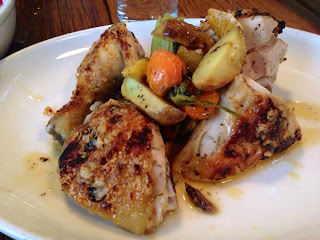 I've been obsessed with ordering chicken since my revelation at The NoMad last year and this one did not disappoint   The chicken was incredibly juicy with a nice char on the outside and crisp garlicky skin.  The veggies underneath had sopped up most of the wonderful juices from the poultry making them extra delicious. 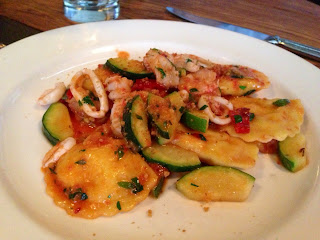 Other entrees were the Scampi Ravioli with rock shrimp, zucchini and toasted garlic... 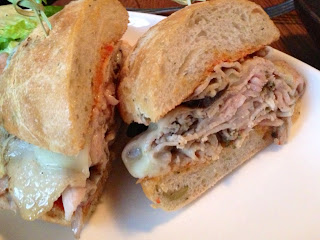 ...and Shaved Porchetta Sandwich with green onions and provolone. 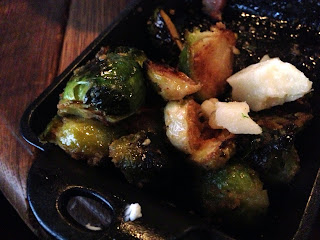 Plus we added on two sides to share, the first an amazing dish of  Roasted Brussels Sprout with big chunks of pancetta and pecorino... 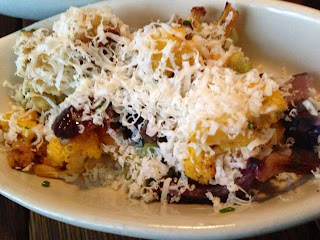 ...and some Sicilian Cauliflower with cipollini  and ricotta salata.  I thought everything was quite tasty.  I wasn't a huge fan of the spice on Mr. T's porchetta sandwich but he didn't seem to mind.  Onto the final course- dessert!  The Maple Budino was calling my name but so was the Vanilla Bourbon Gelato. 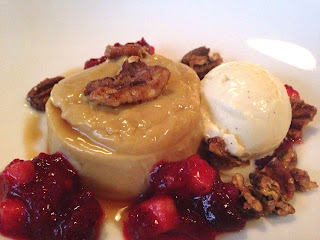 Luckily the let me swap out the normal sorbetto accompaniment for the gelato instead and it was just perfect.  The candied pecans on top gave it a nice crunch while the cranberries rounded out the sweetness. It was a fantastic end to the meal.  Locanda Verde is really doing Restaurant Week right....I may have to squeeze one more lunch in here before it ends!