January 21, 2013
If you live in NYC there is a 99% probability that you've at least heard of Mission Chinese.   There hasn't been this much press about a new chef since David Chang started his Momofuku empire years ago.  Chef Danny Bowien opened the first Mission Chinese out in San Francisco and then came to NYC last year for his second outpost, bringing his love of "Americanized Oriental Food" to the LES.  His restaurant quickly started a clut following of sorts and has been picked by just about every food critic as the top new restaurant of 2012.  Danny isn't just about creating unique eats its about giving back and he donates .75 of each entree he sells to the Food Bank of NYC.

The long lines and the promise of face numbing heat (my tongue was completely numb for a full hour after a bite of  noodles from Xi'an) scared me off a bit but finally Mr. T and I stopped in for dinner last week.  I loved the dive bar atmosphere and it was totally rocking for a Monday night.  To begin the Chongquin Chicken Wings with explosive Chili and crispy Beef Tripe. 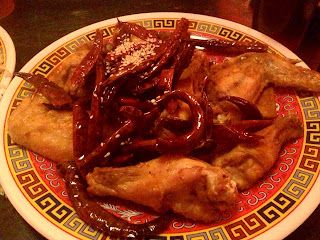 When something has explosive chili in the description you better be prepared.   These wings were extra crispy and had a ton of heat...I really enjoyed the flavor at first but then about halfway through my second one I was quite certain I had burned at least 3/5th of my tongue off and had to stop.  Luckily they brought out a little bowl of pickled cabbage and peanuts which helped me regain some semblance of a tongue again. 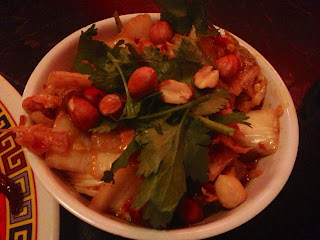 The Salt Cod Fried Rice with Mackerel and Chinese Sausage was also a welcome cooling respite. 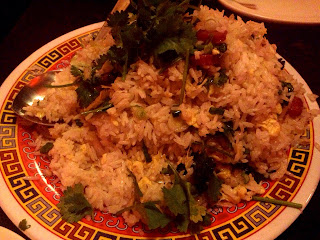 The salty rice cut right through that heat and I enjoyed the flavor of the mackerel and egg in the dish.  Mr. T was not enjoying much of anything at this point and unfortunately I had to agree with him on our next dish the Beijing Beef Pancake. 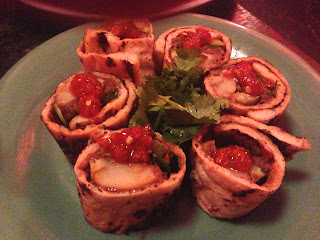 The flatbread was incredibly soggy and the beef and chili inside just didn't complement each other.  It was a sloppy stringy mess.  Onto bigger and better things, my favorite dish of the night would be our last, the Kung Pao Pastrami. 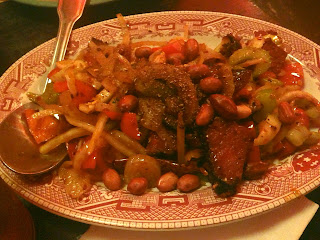 This had the same explosive chili as the chicken wings but here the fatty pastrami soaked in some of the heat and combined with peanuts and potato for a nice slow, smokey, spice.

In the end we were a bit divided.  Mr T flat out hated it...I liked some dishes but overall it was just a bit too much heat for my sensitive taste buds.  I still like what Bowien is all about and I hope to he continues to do well.  Judging by the line of people waiting outside as we left on a chilly Monday night I think he'll be just fine.