Happy Hour at the Cellar of Cheese!

July 20, 2011
I was so excited to see Beecher Cheese had finally opened up on Broadway. It seemed like they had been getting it ready forever but the new cheese space is finally up and running. Besides selling various cheeses they also opened up a really cool restaurant called The Cellar. 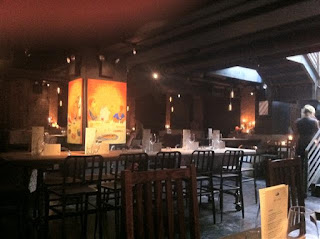 I was shocked when I saw the space. It was so dark, cozy and sexy. This is a perfect date place for sure and what’s even better is that it was Happy Hour when I arrived! 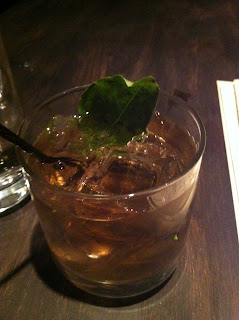 I ordered the special infused cocktail for the day ($7.00) which was a Vodka Basil Strawberry.

Wow- when I first took a sip my sinuses pretty much cleared right out. It was almost like eating some really spicy horseradish. I think they may have soaked the basil a tad too long making the taste somewhat overpowering. However they certainly put a ton of vodka inside as well and after a few sips I got used to the taste (as is the case with most strong cocktails). I wouldn’t order it again but it actually became manageable for the meal. 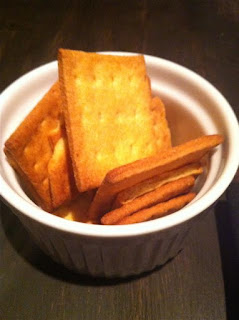 To begin they brought around a little ramekin of crackers. These crisp buttery squares would be a perfect vessel for enjoying the vast array of their cheeses. 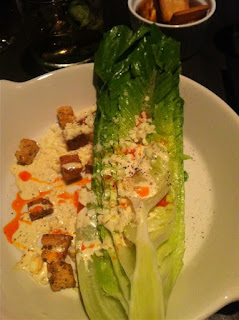 I however wanted an entrée so I went for the special happy hour Cesar Salad. When this first came out it reminded me of the Todd English salad I had at Bonfire. The dressing was slightly spicy and the Flagship Beecher cheese was crumbled over top. 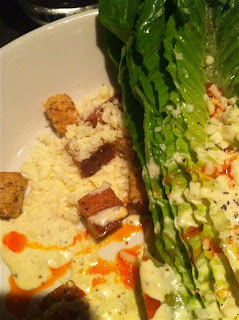 I have to admit I was expecting a little bit more sharpness from the cheese but overall the salad was excellent. My only qualm is that the only knife at my table was a rounded cheese knife. Try cutting into a thick wedge of Romaine with that!
However the service at Beecher’s was impeccable. My water glass was filled at least four times and my waitress was incredibly friendly and knowledgeable about the cheeses and the space. I even noticed towards the end that she was acting as the bartender that night as well!

With a strong cocktail and a large salad the bill came to $14.15. That is quite a bargain and I’m planning to come back again this week. I ended up walking around upstairs and got a ton of free cheese samples so I kind of made out with a dessert cheese plate as well! Beecher's is yet another great addition to the neighborhood.
Beecher's Cheese cocktails Happy Hour The Cellar

Anonymous said…
I walked by Cellar a ton before it opened then forgot about it. I was recently reminded when I was looking for new restaurants to try in my neighborhood on City Maps. I went in the other night for happy hour and it was delicious. I love city maps for reminding me of great stuff like this all the time!
August 17, 2011 at 2:01 PM