May 05, 2010
My friend was up visiting from Tarrytown and that always means one thing for Sunday morning- brunch! As you know Mr. T hates brunch so I jump at the opportunity to actually have someone to go enjoy it with it. Kittichai had been on my radar for a while so we hopped in a cab down to SOHO and got a great table outside.

Kittichai is an upscale Thai restaurant in the Thompson Hotel. I had eaten here years ago when it was Thom and absolutely loved the space. It still has the same sleek interior and lazy almost vacation vibe outside. The real draw however is the brunch deal. For $20 you can enjoy unlimited cocktails for 2 hours along with your entree. In my book that is awesome. 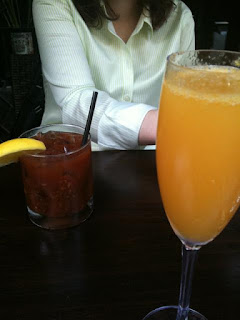 Carrie went for the Bloody Mary. This had a nice kick to it without overwhelming chunks of tomato. I started out with the Blood Orange Mimosa and then switched over to the Lychee Bellini's when I had my fill of juice. Both were wonderful and they truly didn't skimp on the champagne.

For my entree I decided to shy from the breakfast items and went for the Shrimp Pad Thai instead. It came out looking kind of like a weird birds nest. 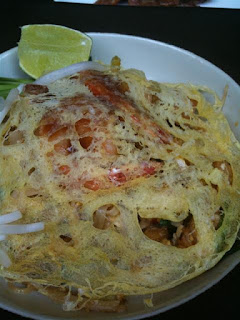 The plate was covered in some sort of spun egg creation with all of the tasty goods underneath. 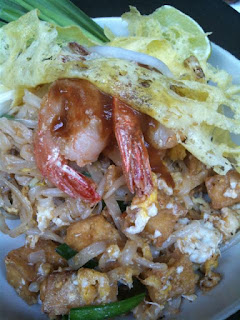 Once I cut through the exterior the bottom was a bend of scallions, sweet and spicy shrimp, noodles and crushed peanuts. While this is definitely not a typical brunch dish it was really good. There were only about 3 shrimp but each one was pretty large and the scallion egg sauce was very well balanced. As usual I didn't even come close to finishing the noodles before I was stuffed. 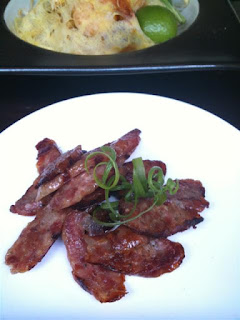 We were intrigued by the sound of the Thai Sour Sausage so we split a side. I didn't really notice anything particularly "sour" about the dish but I thought it was tasty. After an hour we were both stuffed and I had had my fill of early morning drinks. They did a fantastic job refilling the cocktails and I don't think my glass was ever empty. As far as brunch deals go in this town- Kittichai rocks. The service was friendly, the food was filling and delicious and the amount of morning eye openers were a plenty!