April 03, 2009
There seems to be an overabundance of “hidden” cocktails bars popping up all over this city.

Our favorite of all time is the old and reliable Angel’s Share but we’ve been frequenting Apotheke and Death & Company as well.

Then we received an email from Mr. Trekkers Mom about another one of these new “hidden” places the Raines Law Room. It happened to be pretty close to our apartment so Saturday night we decided to check it out.

Raines Law room is on 17th street at the bottom of an unmarked staircase. I wouldn’t have even noticed something was there if it weren’t for the blue winter storm door in front.

In order to get inside we had to ring a buzzer and wait patiently until a well dressed man let us in.

The room itself was beautiful. There was a low tin ceiling, plush velvet couches and candles all along the walls. Some nice jazz music was playing in the background and it just felt really comfortable

Unfortunately my eyes hadn’t quite adjusted to the darkness and I had to basically feel my way to our seats. Thank goodness it wasn’t more crowded or I think I would have stumbled right into someone!

It was only about 6:30 so there was ample room for us on the large velvet couches.

We grabbed a spot and ordered a couple of drinks.

I decided to order one of the special cocktails that night the champagne cooler. 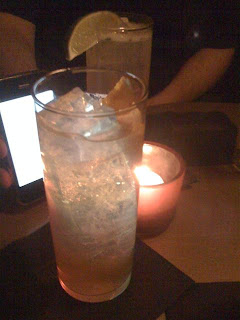 (Mr. T used his Iphone light so I could get a picture)

Champagne, Cointreau and I think some kind of Gin.

Whatever it was it was pretty strong and absolutely fabulous! Mr. T tried a sip and hated it but I was in love. It’s up there with one of the best cocktails I have ever had.

Mr. T went for one of the regular drinks off their list the South Side Rickey.

I am not a big mint fan so I didn’t really care for it but he seemed quite pleased with the order.

Another neat thing about the place was the little old fashioned buzzer at each table used to ring for your waiter.

It was the little touches like this that made me really enjoy this bar.

We knew the cocktails would be pretty pricey so we only stayed for one. All of the drinks listed on the regular menu were $13 but my special cocktail ended up being $16

That’s pretty expensive but it was a pretty phenomenal cocktail.

After Raines law Room we walked over to a usual hang out the Park Bar for a beer and to decided on dinner.

Neither of us were starving but we both felt like some Japanese food.

As we left Park Bar we noticed some empty tables at 15 east next door and decided to give it a shot!

Once again- the recession has worked slightly in our favor. They were ableto accommodate us at 8:00 on the dot.
Unfortunately it was extremely dark inside the restaurant so none of the pictures really came out except for this dark one of their slow poached octopus. 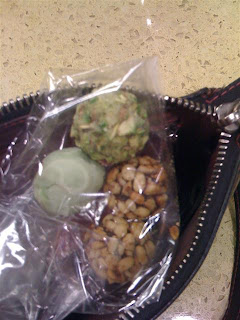 Big meaty medallions of octopus were arranged on our plate around a mound of sea slat.

Wow- this Octopus was good. Apparently they massage the tentacles before poaching and the result is an incredibly soft and rich piece of meat.

I am a huge fan of salt so I sprinkled a little of the sea salt on each piece and it really helped bring out the flavor.

We also ordered the Sushi Omakase and the Japanese Rib Eye.

The sushi was obviously very fresh and the Rib Eye had a great flavor but I’ll admit I wasn’t totally blown away.

I think I enjoyed the Rib Eye at Nobu 57 a little better. It had a bit more flavor and it was a thicker cut of meat.

The sushi was fantastic but again, I guess I was expecting Yasuda quality for the price and it feel a little short.

That being said it was above average sushi and they even had a few reasonably priced bottles of wine that helped out with the overall price point.

Would I go back again? I think I would to try out a few of their rolls and order the tuna flight.

The omakase didn’t have the best cuts of fish and I think we would have enjoyed it a lot more if we stuck with just fish and the kinds we like.

For dessert I had some Kee's chocolates hidden away in my purse I had picked up earlier in the day.

I got a Green Tea, Pistachio White Chocolate and Two Pignoli.

All the chocolate was great but the Pignoli was amazing!!!

It was a wonderful Saturday night however and the best part was that we were so engaged in our eating and drinking that we completely forgot that basketball was even on!! That’s pretty big for us!

And you know what- one night didn’t kill us!