April 01, 2009
So the Choice Eats festival last night was a big success I believe and better than last year for many reasons I will discuss at the end but first the food!!

Of course the first stand I see when I walk through the door is Porchetta and find myself suddenly stuffing my face with their deliciously fatty pork sandwich. They were giving away a pretty big sized sandwich portion and I probably shouldn’t have started with such a hearty dish since I had a lot of eating ahead of me.

Of course my next choice wasn’t exactly light. 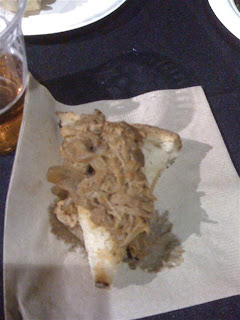 This is the shredded Pork with orange marmalade marinade from Jimmy’s No. 43.

Yum! This pork wasn’t super fatty like Porchetta but had a very tasty sweet sauce that really made the pork extra tender and tasty. Way to go Jimmy’s!

After that I had countless different kinds of food that all seem to blend together.

One of my favorite dishes of the night came from The Smorgas Chef. 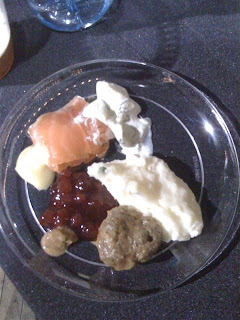 He plated up a Swedish Meatball with ligonberry, chive mashed potatoes and a side of Gravlax with mustard sauce.

Honestly the last time I had a Swedish Meatball was eight years ago at IKEA so maybe I’m a little bit behind the times but I thought it was great.

I couldn’t enjoy the Gravlax due to my salmon allergy but the mustard sauce had a nice tangy flavor that worked with the meatball as well.

Another surprise favorite was the Mango guacamole from Mercadito. 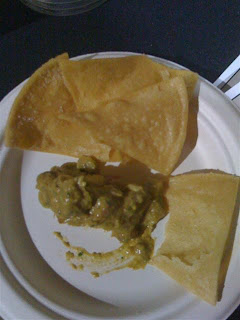 I have always loved their fish tacos but usually stick to the standard guacamole.

Apparently I was making a big mistake!

The mango guac had a fantastic tropical flavor that was mellow yet tangy. I am not someone who “fill up on chips” but I went back for seconds of this one.

Mr. T's favorites included the chicken curry dish from Fatty Crab and the Lasagna from Max which were both packed with some seriously great homey flavor.

Queen of Sheba almost put me down with some seriously spicey stuff but luckily I was able to bounce back and check out some more.

Unfortunately I missed out on some of the big BBQ places like Fette Sau and Smoke Joint but I had already had quite the pork fill from the very beginning.

I did fill up on the plethora of sweets and drinks however.

They had some of my favorite beers rocking last night- Allagash White, Chimay Red, Ommegang, even Lindemans Raspberry Framboise!

I also tried a new beer from Left Hand Brewery that had a nice subtle ginger flavor that was very different and quite enjoyable.

I also tasted many of the different wines and cocktails in the back, the favorite of which was the Clementine vodka from Svedka.

I am sooo picking up a bottle of that!

For sweets I enjoyed this fantastic key lime cupcake topped with peanut brittle from a stand that I cannot remember the name of, which is unfortunate because it was spectacular. 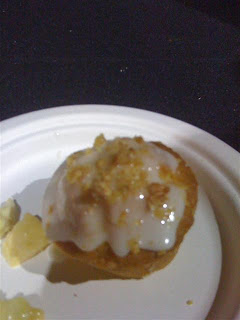 Whole Foods was giving out mini brownie sundaes made with espresso or vanilla gelato which were just yummy and Momofuku Milk Bar was giving out whole cookies to each person!!

I grabbed a Peanut Butter while Mr. T went for the fabulous Corn Cookie. 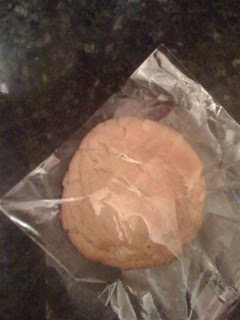 The best dessert of the night however was the Bomboloni filled with chocolate and jelly from Motorino's. Yum!!!!

Overall I had a fantastic time and thought there were a lot of pluses to this years event versus last years.

The new venue gave much more freedom for moving about and trying out the different stands.

The beer and water was centrally located in the middle of the two food areas so you could have food and a drink at the same time.

The staff working there seemed a little more prepared as well.

This year they checked ID’s and gave you bracelets as you waited outside.

Once the doors officially opened the line moved quickly and efficiently.

The only problem with the event was only one bathroom area and some of the vendors being a little unprepared for the amount of food being consumed.

Hopefully next year they will make enough for the masses and maybe add a toilet or two!

Overall I had a great time and can’t wait for the next one. What fun to try out so many great restaurants and drinks under one roof!
Choice Eats 2009