DiFara's Is Truly the Best

April 11, 2009
I happened to be in Midwood last week for work and was heading back to the office to grab some lunch.

For some reason I happened to think of DiFara's and decided to google where it was in relation to me.

When the map came up I realized I was only two avenues away!

I literally ran over the two avenues and got there right around 11:45 and was only the third person in line outside.

I must have hit the timing just right because within 5 minutes the line was over 30 people long. 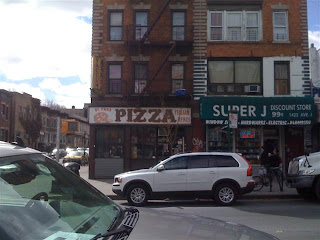 It was funny waiting in line.

In the front were two classic Brooklyn guys who were arguing about the Yankees while every so often touting their pride at being the first in line and finally being able to sit down for their pizza.

Behind me was a middle aged man who had brought his mother for the first time. She just stared in wonder as more and more people piled into the line behind her.

The rest of the people were a mish mash of local firemen, construction workers and a whole bunch of locals and tourists alike.

I kind of laughed at how excited everyone genuinely seemed for their lunch. I mean come on it’s just pizza right?

But then the door was opened and the line became very serious. The Brooklyn guys split up- one going for a table and one going to the counter to order.

I was surprised at how small DiFara’s was and didn’t know I might have to battle for a seat, let alone know how to order.

I got to the counter and asked for a slice of whatever was ready first and grabbed the only solo table right against the wall.

About 10 minutes later my slice was ready and I dove in.

I don’t know exactly what I was expecting. I have heard so much hype about Difara’s I was honestly expecting to be disappointed. I mean –come on- again this is just pizza right? 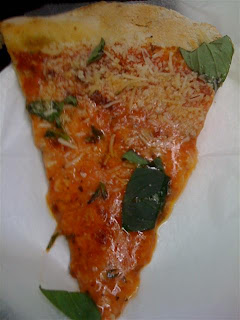 I took a bite and suddenly everything made sense.

All the praise, all the accolades and honors were worth it. This wasn’t just pizza- this was art!!

The amazing red sauce with beautiful whole tomatoes, the perfectly charred crust with just enough grit so your fingers feel a little dusty, the glorious rich olive oil, the smell of the fresh basil and the shredded cheese…it was utter perfection. 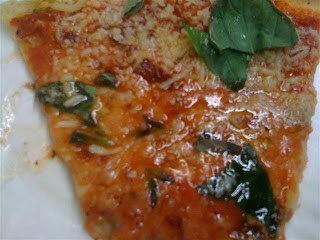 As I ate my tiny table became surrounded by people waiting patiently for their pies.

I could feel everyone’s eyes jealously staring me down while I ate. I swear I even saw a trickle of saliva drip down the chin of one man salivating from afar.

I would have felt uncomfortable but I was so content I couldn’t care less!

I munched away happily and watched Dom as he worked his magic with each pie. 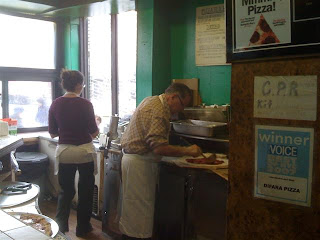 Cutting the fresh basil, grating the fresh cheese- he had such precise caring motions I truly knew I was watching something special.

The only thing I was upset about was the fact that I only ordered one slice! What was I thinking?

So it appears all the hype is for real. I’ve had Lombardi’s, Grimaldi’s, & Artichoke’s and they are all good and fine but they don’t even come close to the heavenly pie that is DiFara’s.

So if you haven’t had it yet- take the train ride and go. It truly is one of the best things NYC has to offer.