The First Leg of the Trip

April 22, 2009
To be honest, the first leg of the trip started out at Yankee Stadium for a 1:00 game filled with lots of food and beer.

Luckily we kept ourselves somewhat in check and made it to the airport on time and sober enough to get past security.

Once on-board however we decided the best thing to do was to continue drinking so we could pass out.

So our trays looked a lot like this for the start of the journey. 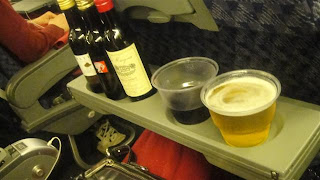 It worked like magic however and suddenly the lights in the plane were on and we had arrived in London.

Needless to say we weren’t exactly in the best shape. I’m not sure if anyone will ever see the pictures of us getting off the plane. We look a little bit like zombies.

We jumped on the tube and made it safely to our hotel and went to the Sherlock Holmes bar across the street for a few drinks to wait until check-in time.

We were absolutely starving by the time we checked in and headed out in search of some good eats.

About two blocks from our hotel we ran across Wagamama.

Wagamama is supposedly the place David Chang kind of modeled his Ramen after at Momofuku so we had to check it out. 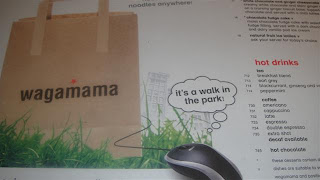 Mr. T ordered up a bowl of Ramen and I went for the Mandarin Chicken salad. 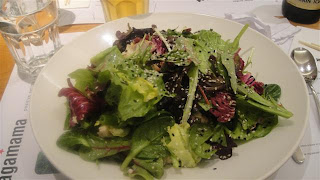 The salad was pretty fantastic.

Big chunks of chicken and toasted cashews were scattered throughout and the dressing had a nice light refreshing flavor.

Mr. T went for the Wagamama Ramen and said it was alright but pretty bland. 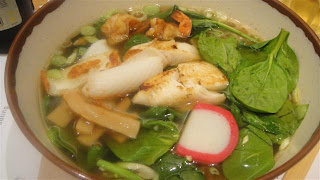 The broth was no where near the salty thick goodness of Ippudo and the veggies in the bowl were somewhat lacking.

That’s what we get for ordering Ramen in London for our first meal.

We walked around a bit and did a bunch of touristy things until dinner time.

I had posted on Chowhound some questions about London and someone responded with a whole night’s itinerary.

He sounded kind of like us so I decided to go with his suggestions and try the whole thing out.

We were supposed to start out by having a drink at the Kings Arms and but got lost and found ourselves at this pub instead the White Hart. 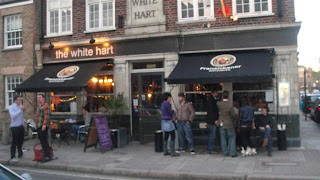 This actually turned out to be our favorite pub of the trip so it was a nice surprise.

Look at this photo they have of Kurt Cobain in the back. 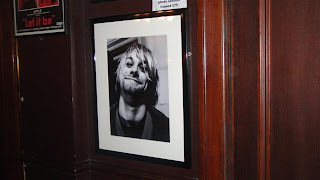 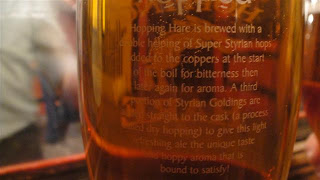 We had some awesome beers and headed over to the place that was supposed to have the best fish and chips in London (according to this guy on chowhound that is). 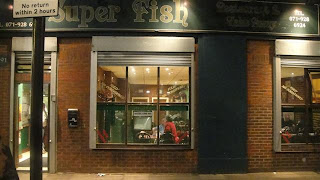 We walked inside Super Fish to find a very empty, sparsely decorated place with a wait staff and clientele which were all Asians.

This seemed a little bit strange to me since I had pictured something a little different for my fish and chips experience but we plowed forward an decided to split an order of fish and chips and a crab appetizer to start. 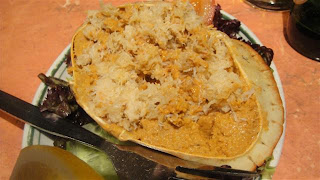 The crab appetizer was alright. The sauce they mixed in with the crab meat was a little overpowering for me but Mr. T seemed to enjoy it.

Then came our main course- the reason we trekked all the way from our hotel (it was quite a ways away), the fish and chips. 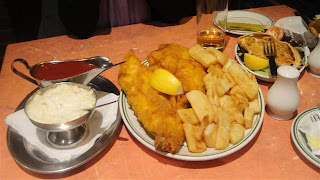 Okay this is ONE order..one order!!! Two gigantic pieces of fish that barely fit on the plate!

One bite was all I needed to understand that yes, this was the best fish and chips in London.

The breading was perfectly balanced, light enough to not overpower the flavor of the fish but incredibly crispy and really not greasy at all.

The fish inside was super moist and just seemed to fall apart into glorious chunks of deliciousness as we devoured the platter.

The fries on the plate were only so, so, but it didn’t matter. That fish was amazing, absolutely the best I have ever had in my life.

And I say this with a lot of experience having eaten a fish fry every single Friday of my formative years in Buffalo.

The other great thing about this place was the price.

The appetizer, entrée and two rounds of beers came to just about 22 pounds.

By the time we left the place was packed with quite a large crowd of locals waiting for tables and picking up food to go.

We finished the night by enjoying a Pimm’s Cup outside on the wonderful Thames River and made it back to the hotel alive. 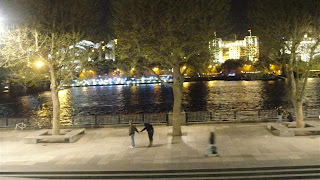 howler (chowhound) said…
you're sooo lucky with the weather - try and get up to hampstead heath at parliament hill for some superb views.

and dont miss dark aventinus beer from the keg at weisses brauhaus in munich.

Tasty Trekker said…
Thanks for the tip! The Aventinus was awesome. One of my favorite beers but so different from a keg. Excellent choice!
April 28, 2009 at 4:54 PM