March 30, 2009
Okay so it wasn't exactly warm out today but I was in the spring spirit. We decided to forgo making the dinner we had planned and headed over to shack shake for some awesome burgers.

As we waited for our food I decided to try out the beer they have on tap that's made exclusively for the Shake Shack from Brooklyn Brewery called the ShackMeister Ale.

I am always trying to support the local breweries and have tried almost every Brooklyn Brewery beer to date so I really needed to check this one out.
As you can see it wasn't exactly warm while we were drinking the beer but man I really enjoyed it. 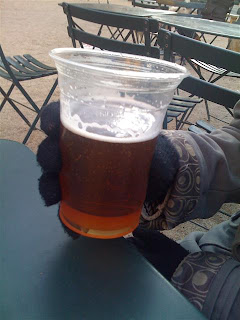 Obviously a plastic cup isn't the best device for trying a new beer but at Shake Shack that's how they roll.

For such a bad drinking device this beer was excellent!

It poured a light amber and had quite the lacy head and a fantastic autumn smell.

The taste was wonderful as well. It had a nice malty dry hopped flavor that was perfect for drinking in the chilly park.

If they bottled this beer I would definitely buy a bunch.

It's too bad the Shack is the only place to get it.

While at the park I was surprised to see they installed televisions with various movies at the Shake Shack playing. 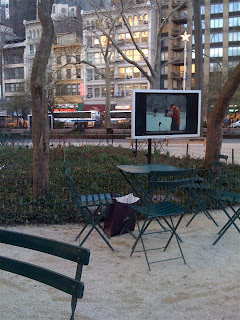 Was it art? Not art? Just entertainment?

Who knows but it was pretty cool and a sure sign that Spring weather is on its way!!!
beer Shake Shack