March 13, 2009
We met up with some friends a couple weeks ago to celebrate Fat Tuesday.

Well not really- it was just an excuse to go out for dinner!

We had heard so much about the Redhead we figured it was high time we check it out.

The Redhead has an old classic, warm kind of feeling to it. The rickety wooden bar and low, dim lighting (which is why the pictures are so dark) give it a certain charm. Kind of like putting on my favorite old sweatshirt it just had a comfortable feel about it.

We started off with some appetizers for the table of the famous Bacon Brittle and Sausage pretzel. 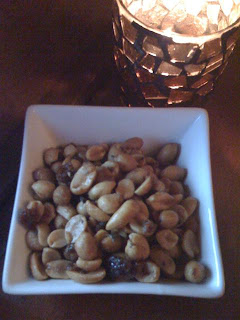 Now the brittle isn’t really a brittle. It’s more just peanuts tossed with some molasses and little pieces of bacon.

That being said however it was pretty awesome. If this is the nut mix you’re serving at your next party be sure to put me on the invite list!

Salty, sweet and incredibly addictive I kind of wish I wasn’t splitting them with the whole table. 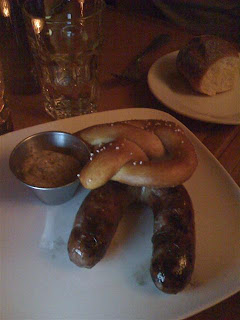 The sausage and pretzel was really good as well.

The warm pretzel, made in house, had a strong wheat flavor that was incredibly fresh.

The kreuz market sausage was just as good as always and came grilled to snappy perfection.

Watch out for the mustard though- it’s fantastic but spicy! I think I cleared my sinuses out in one bite.

For my main dish I ordered the One Eyed Caesar Salad. 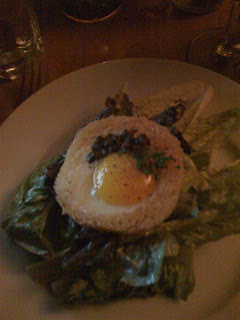 Fresh Romaine Lettuce tossed with a creamy Caesar dressing and topped with a One-Eyed Susan.

The One-Eyed Susan is basically a piece of bread that has a hole in the middle filled with a fried egg and topped with capers.

Yum!!! The One-Eyed Susan was awesome!!! They were a little heavy handed on the salt but the creamy Caesar dressing balanced that out.

One of the best Caesar salad’s I have had in a long time! 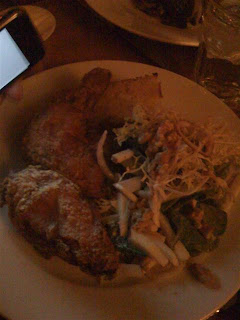 The chicken was super crispy outside and super moist inside. Mr. T loves fried chicken and declared this as the best in the city. 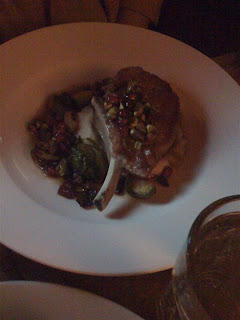 The other dish of the night was a massive pork chop that came with some roasted brussels sprouts and an amazing pomegranate-pistachio relish that I could have slathered on everything!

I think we all pretty much licked the plates cleaned! I really wanted dessert but didn’t feel like looking like the only pig in the group so I held off.

However I have been dreaming about the Chocolate Bread Pudding they had listed on their menu ever since. It apparently comes topped with vanilla ice cream and their bacon peanuts. Yum!!!!!

I am planning to recreate the bacon brittle at home- maybe I can even try doing the whole dessert!

The Redhead was awesome. If you’re looking for some comfort food there’s no better place to go.
The Redhead