March 22, 2009
One of my favorite places to go grab a beer and watch a game is Standings in the East Village.

It’s a very small quaint bar that has more Sports memorabilia and TV’s than most of the large sports bars in the city.

What makes it extra special is their super friendly staff and wonderful selection of rotating beers on tap.

Most sports bars have the usual- Miller Light, Sam Adams and maybe a Bass or New Castle.

In other words- crap.

In other words some darn good beer.

This past Sunday they held a special Dogfish head event where they tapped a keg of Dogfish Head Red and White.

Mr. T and I were in the village so we decided to swing by for a glass.

What’s so special about this beer? 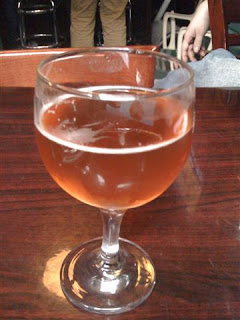 The beer poured a golden red color with a medium head at first that evaporated quite quickly leaving a nice lacing on the glass and a very small foam ring.

It had a sweet smell on the nose of caramel and apricots that was very gentle.

And man the taste!!! This was one of the smoothest, yet most complex tastes I have ever enjoyed in a beer.

Up front there was a big citrus flavor that gave away to a slightly sweet honey taste with a little bit of oak.

This was fantastic!! It had such a nice thick mouthfeel but was somehow extremely drinkable.

You would never be able to tell that this was 10%.

Halfway through our beers the wonderful bartender came over and chatted with us for a while about the drink.

After we told him how much we loved it he walked away saying- “you would never guess it was that strong.”

Mr. T was absolutely floored. He is always drinking barely wines and black chocolate stouts and is used to the strong alcohol flavor in those big beers.

There was none of that going on here. I could easily drink a six glasses of this stuff…I wouldn’t be able to walk afterwards but I could drink it!

It was so yummy. I’ve been looking for it in the stores but have only found the Dogfish Head Black and Blue.

If anyone sees the Red and White anywhere please let me know. This been has made it to the top 10 list of my favorite beers and I would really like to enjoy some more before it’s all gone.