March 18, 2009
We have been on a serious Chinese food kick as of late and Sunday was no different. We woke up and didn’t feel like ordering anything so we walked down to St. Mark’s and decided to eat in at Grand Sichuan.

Grand Sichuan is on the second floor of a building that houses Super Cuts and Chipotle. (Can you believe what’s happened to this street!!!)

We got a great table right at the front of the restaurant over looking the street which was great for people watching.

One thing I liked about their menu was that every dish had a picture. The one thing I didn’t like were the delicious looking bubble tea pictures they had when they really didn’t sell any :( Oh well.

We decided to start with a small plate of Unagi and a special that day the Spicy Peanuts. 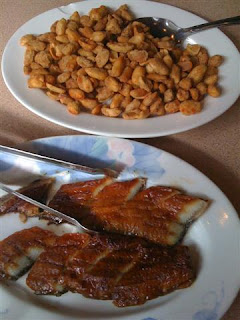 Okay the Spicy peanuts may be one of the best beer drinking foods I have ever tasted.

The peanuts were coated with a honey sugar glaze that had red pepper flakes mashed in.

Whew- these peanuts were spicy, hot and sweet all at once. Yum!!! For $5 it was pretty expensive for peanuts but I would get them again if we came with a group of people.

There were way too many peanuts for two people to ingest in one sitting. That would just be unhealthy.

The Unagi was pretty good. Unfortunately we had just eaten at Nobu next door the night before and experienced some of the best Unagi I have ever had.

Obviously this is a fish of a different color but I was kind of ruined for it by the stuff I had just had. I probably shouldn’t have ordered it.

For our main we got the Spicy Hunan chicken. 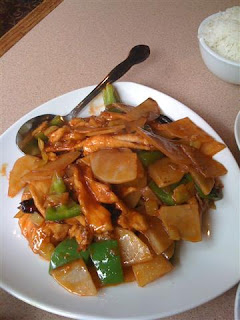 Basically flattened pieces of chicken sauteed together with green peppers, onions and a spicy Hunan sauce.

This dish was pretty good. The flavors were well balanced but almost not spicy enough for me.

Mr. T had ordered a side of spicy dumplings and I liked the sauce on this much better so I ended up dipping my chicken into that.

As you can see we were in quite the spicy mood!!

As usual we ordered more than enough food and ended up taking home a bunch with us in nice little Chinese takeout containers.

I never see those containers anymore. I really enjoy eating out of them and I don’t know why.

So I thought Grand Sichuan was really good. I enjoyed the food and the view could not have been better. Definitely a solid place on St. Mark’s for some good Chinese food.