February 22, 2009
The Pizza pub opened in the old Push space over on 3rd avenue.

Apparently the owners are the same they just wanted to try something new.

I was really excited about some new good pizza in the neighborhood so I went over to check it out the day after it opened.

The sign that greeted me outside the pub read "Free slice with very shot".

I'm not really a shot taker so I just grabbed at seat at the counter and ordered two slices of pie.

First up is the regular. 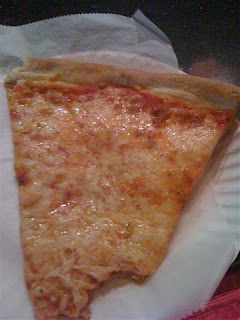 The pizza looked like it was going to be exactly what I love.

Super thin with a perfect ratio of cheese and sauce I had high hopes. Unfortunately it just wasn't that great.

While the crust was super crunchy- it had no flavor. In fact it tasted a little bit like cardboard.

The pizza itself was alright but it lacked flavor overall as well.

I added some oregano and garlic salt which improved the pie but it still needed something more. 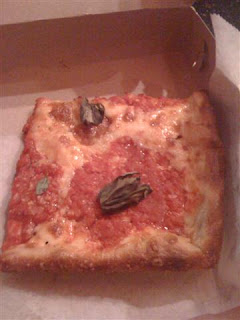 The grandma slice didn't do much better.

Again- upon first look the slice looked like it was going to be amazing.

The golden crust looked so rich and buttery while the sauce and cheese smelled extra garlicky.

Unfortunately the dough was extremely undercooked and the sauce was almost a little too sweet for my taste.

So overall the pizza pub was a little disappointing. While they looked amazing they both lacked in flavor.

Maybe it's just some early kinks. I will definitely give it another try in a few weeks and check out some of their other slices.

They do have some nice TV's and a decent selection of beer that helps.

We'll see if they can pull it together a little bt more.
Pizza Pub

Jess Neal said…
Ok, so I seriously disagree with your comments, however your opinion is your own. I admit when they first open the operation was a little confusing, but since then it has become my favorite neighborhood spot. For $4.50 you get a slice of the regular cheese and a pint. There isn't anywhere else in the area where you can get a deal like that, especially in this economy! The place is super nice, there are flat screens everywhere to watch games, plenty of seating, a really chill staff and awesome music. It is definitely the best spot to eat, drink and hang out with friends when you are on a budget.
April 1, 2009 at 2:07 PM