February 07, 2009
Mr. T and I decided to try and eat something light and healthy on Sunday morning because we knew we would be chowing down later on some heavy football food for the Superbowl.

We had some fruit, cleaned up the house a little and headed out to get some last minute provisions.

It was such a nice day outside we decided to walk down to Whole Foods Bowery instead of just hitting up our neighborhood Union Square.

Well the more we walked the more hungry we got, until both of us just decided we needed to grab something. All thoughts of our plan to stick to something light and healthy went out the window when we realized we were only one block away from Momofuku Milk Bar!

It was still pretty early in the day around 2:00, but there were still about 6 people in line ahead of us.

While we waited, Mr. T decided to get his usual Momofuku order- some pork buns- while I said I would satiate my cravings with a cookie.

Well by the time we got up to the counter to order I had been staring at all of the deliciousness around me I just couldn’t handle it and ended up ordering some ice cream and a cookie!

I think the toppings cost more than the ice cream in the end.

Mr. T looked at me like I was crazy but whatever- I have no control when it comes to desserts.

Here is the finished sundae. 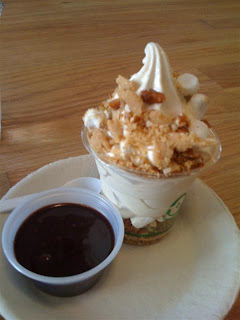 I was really excited but unfortunately I didn’t really enjoy it as much as I had hoped.

The custard is thick and very, very strong in graham flavor.

At first I loved the strong flavor but around bite four it really started to wear on me.

As far as toppings go the marshmallow and pretzel were fantastic.

I loved the addition of salty crispy bits to the sweet base and I ate almost all of those- however the peanut butter halvah had a strange aftertaste that didn’t seem to go with my choice of ice cream.

The hot fudge was super dense and while I love a gooey rich fudge this was also a little too strong to enjoy with the strong flavor of the graham.

I think this may have been the only sundae I have not been able to finish in my life.

Now that isn’t to say I will not try out another sundae again from here- hell no!!!!

I love Momofuku- I just think I ordered wrong for my tastes.

I usually have my sweets- especially sundaes - late at night and I think this was just too heavy for daytime consumption.

Next time I will return after dinner and check out a different flavor of soft serve as well. They were out of the Salty Pistachio…that sounds amazing!!!

Somehow I was able to down some chicken wings and a gloriously greasy Porchetta sandwich about four hours later, so I guess the sundae didn’t do too much damage.

Or maybe I just have the ability to eat an insane amount of unhealthy food in one day.