February 13, 2009
Mr. T and I had an impromptu dinner the other night at Sakagura.

I had been dying for sushi and we decided to meet up and go to Sushi Yasuda right when it opened for dinner at 6:00.

I got there right at 6:00 and they were completely booked! No room at all!

I was so disappointed :(

I guess I shouldn't have been surprised. Even at 6:00 on a Friday night that place is hopping.

Luckily Sakagura had room at their bar so we hopped over there and had some small dishes.

The highlight of the meal for me was the beers we had- particularly the one Mr. T ordered. 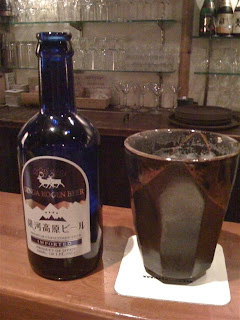 This is the "Ginga Kogen" beer from Iwate, Japan.

This had a fantastic nutty, rich flavor. It was kind of like a Japanese Winter beer.

If they sold this in the stores I would definitely pick up a six pack.

My beer was really good as well but not so special. 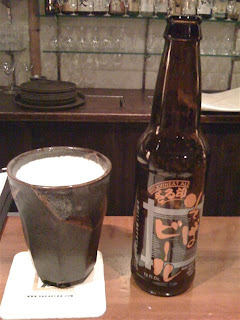 I got the Soba Buckwheat Ale.

When I ordered it I didn't realize that it was a Rogue Brewing Company beer.

I love Rouge Beers but I was hoping to try something a little different. This I can find in my local bodega.

Oh well- It was nice but Mr. T's really stole the show.

However I love how the bottle is completely different than it normally is in the store. I kind of wanted to take it home.

Our dinner was very good as well. Th best dish being of course the Sakagura pork dish.

Insanely fatty, rich and salty- It was amazing.

Not exactly what i was hoping for but it did the job. Next time I'll plan my Yasuda outing a little bit better.