February 10, 2009
If you remember I did a post last week about Chikalicious Dessert club and their cupcakes. I had to settle for the place across the street because I could never actually get into the actual restaurant because it was too crowded.

Why not? I was doing nothing and it was early enough that there shouldn’t be anyone there.

So I zipped down to the East Village and showed up to Chikalicious right around 4:30.

There were two couples inside and a woman with some audio visual equipment who looked to be doing a piece on the restaurant.

I took a seat at the bar and placed my order.

For those of you that don’t know, Chikalicious is a prix fix dessert bar.

For $12 you pick your choice of dessert and then you receive the Amuse of the day to begin and end with the Chef’s selection of Petits Fours.

The amuse that day was a Vanilla Milk Sorbet with a Kumquat Soup. 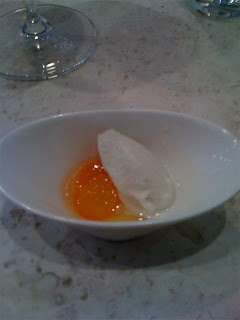 Okay when I looked at this amuse I really wasn’t expecting much, but when I took a bite I was absolutely floored.

I can’t even describe how wonderful this was. I love vanilla and this dish just had an amazingly pure vanilla flavor. Mix that with the acidity of the kumquat and it combined to make a taste that was absolutely heavenly.

I was trying to show good manners by delicately spooning up the last drops in the bowl but I really wanted to throw back the saucer and lick the insides!

Next up was my main dessert course which I was able to watch the chef meticulously put together behind the bar which was pretty neat. 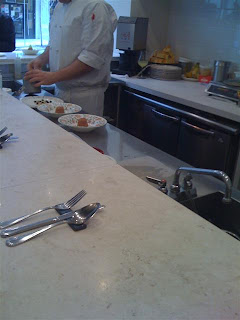 This is the Banana Carpaccio with Bourbon-Molasses Ice Cream and Coca Agar Gelee. 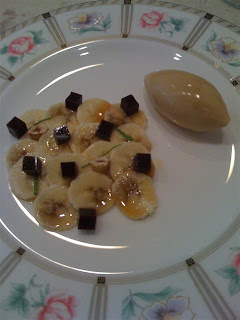 First of all the presentation was lovely. Each piece of banana seemed so lovingly put into place with the chocolate gelee and bourbon sauce.

The dessert was quite wonderful tasting as well.

The warm caramelized bourbon sauce on the banana was fantastic with the creamy Bourbon- Molasses Ice Cream.

When I had a bite of everything together- banana, chocolate gelee, peanut, sauce and ice cream- this dessert was fantastic.

How ever there were only about 4 peanuts on the whole plate! I would definitely add more to enhance the flavor of each bite.

I think overall it was a very good dessert that could be truly fantastic with a little tweak here or there.

To finish up the meal I was given a selection of three petites fours- a Coconut Marshmallow, Black Pepper Pineapple and Chai Tea Chocolate. 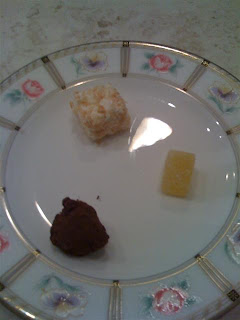 The coconut marshmallow was tasty. I usually hate coconut unless it’s toasted and this coconut was nice and toasty with a soft marshmallow.

The Chai Tea Chocolate truffle was just alright. I have never enjoyed the Chai flavor with chocolate. It just doesn’t taste right to me.

However the last petit four, the one I saved for last because I was sure I wouldn’t like it, blew me out of the water!

How this tiny little jelly tasted so good I have no idea.

It was like biting into summer! The pineapple flavor was once again so pure and strong it was shocking.

The black pepper gave just a tiny kick at the end that really sealed in the flavor. I really wanted to ask for more of these but once again I restrained myself.

So overall I really enjoyed Chikalicious. I think it’s funny I probably enjoyed the beginning and end of the meal the most because they surprised me.

I was worried before coming here that I would be super stuffed after the 3 desserts but I actually felt lighter than I usually do.

The dessert wasn’t heavy and the amuse and petite fours were small so they didn’t weigh me down.

For $12 it isn’t cheap but the experience was worth every penny.

They seem to change their menu quite often and I saw about 2 other desserts I would love to try out so hopefully I will be back soon.

Valentines Day is right around the corner- might be the perfect place for a date!