January 28, 2009
Two Sunday's ago was spent drinking beers and watching football in the East Village.

It was a happy day- none of my teams are in the playoffs so I couldn't get upset at the end and Arizona halted Philadelphia from possibly winning both of sports greatest achievements in one year. so all was good with the world.

After multiple beers we decided it was time for some serious food.

And by serious food I mean Katz’s delicatessen.

Katz’s is a NYC institution known most famously from the orgasm scene in When Harry met Sally.

It is also well known however for its Pastrami sandwich.

Now I have never been a big fan of pastrami.

The first time I ever had it was about 5 years ago at a work function..

One of those crappy midtown lunch kind of places brought in a bunch of sandwiches and I ended up with the pastrami.

It was cold, dry and pretty much tasted like a peppery piece of ham.

I was not impressed.

I’ve had it a few more times since then and the result was usually the same so I kind of gave up on it. The few times I have been to Katz’s before I always got their hot dogs instead.

Well after all of those beers on Sunday I was feeling no pain and decided to give this meat another shot.

We got to Katz’s right as they were closing and I sidled up to the bar and placed my order.

The man behind the counter pulled out some huge chunks of pastrami and shaved me off a slice to eat while I waited.

As soon as I got one look at the meat I knew this was going to be a very different experience.

First of all it was bright red and super fatty- it kind of reminded me of a huge piece of Otoro in a weird kind of way.

I picked up the warm piece of pastrami and as I put it into my mouth I couldn't help but close my eyes in amazement at the strong spicy flavor that seeped out.

It was intense! There was no comparison between this meat and what I had years ago in that sandwich.

This was really unbelievable.

The man behind the counter took turns between various cuts of the pastrami, making sure I got a little of everything and piled it high on top of the rye bread. 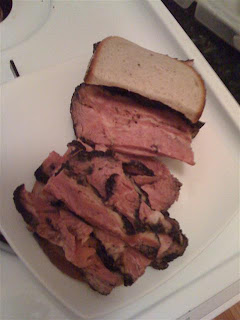 When it was finally ready, I grabbed the mammoth sandwich and marveled in wonder as to anyone who could ever finish this whole thing in one sitting! I barely made it through a quarter when I could do no more.

It was simply too much and the smoky taste really started to overwhelm me after a little while.

Luckily it was easy to wrap back up and take home for dinner the next day which is exactly what I did.

So I’m very glad I finally know what REAL Pastrami tastes like. If you’ve been eating that murky brown stuff like I was- STOP!

Do yourself a favor and get on over to Katz’s! Tell them the Tasty Trekker sent you! (Actually don’t do that- they have no idea who I am and may just think you are a raving lunatic)
Katz's Deli