January 15, 2009
A couple of weeks ago some friends and I got together and decided to have a dinner that highlighted some of the best food NY state and NYC in particular had to offer.

We all split up food tasks and the best cook of the group agreed to host (we really just did all of this as a ploy for him to cook for us!)

The problem with our dinner was deciding what to get. NYC has SO much too offer but I think we did a pretty good job over all.

My contribution was a Meat & Cheese platter of sorts from Di Palo's. 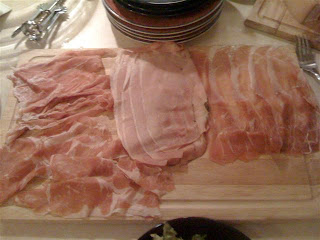 Look at this meat. It's beautiful!

Now this dinner actually happened the weekend before Christmas (I'm a little behind) and I had to wait in line for almost 3 hours to get this meat!

Not just in any line either! I was in a "crammed up next to the freezer with a crowd of tourist chattering around me and waving their numbers like someone was going to forget them even though it was on number 9 and they had number 37" kind of line!

But you know what- it was worth it! The guys at DiPalo's are the best- super friendly and the best quality in town.

You can't beat it.

All of it was fantastic with my favorite still being the Prosciutto de Parma with its salty, nutty goodness.

I also really enjoyed the Prosciutto di San Daniele which was very similar to the Parma except it had a slightly tougher texture and sweeter flavor. 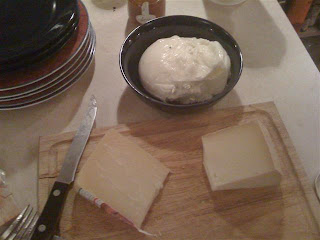 I also picked up some fantastic cheese at DiPalo's.

In the bowl is DiPalo's famous house made burrata.

Burrata is basically a round ball of mozzarella cheese that has an inside filled with a softer mozzarella and cream so it's super spreadable.

If you never had this before you are missing out! It's so creamy, rich and utterly delicious I wanted to spread it on everything!

I also got two different kinds of Pecorino- one aged from Italy and one freshly made.

I had never had fresh Pecorino and while it was tasty I much prefer the aged. It has a much stronger and salty flavor that really went fantastic with the cured meat and the little jar of honey I picked up.

With all this cheese and meat we needed some carbs! 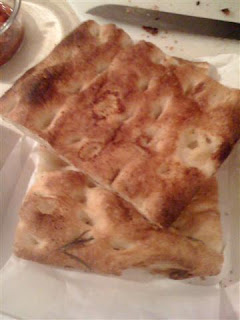 I can't even remember how many different kinds we had- Pizza bianco, olive stecca, tomato stecca, the Focaccia Florentina stuffed with rosemary and my favorite the Roasted garlic stecca with huge chunks of luscious stinky garlic stuffed inside a buttery bread stick.

Oh my Goodness and we haven't even gotten to our dinner yet!

Does that sound good? Thinking where's the New York?

What if I tell you it was Daniel Boulud's Short Ribs Braised in Red Wine with Celery Duo, Momofuku Brussels sprouts and a Potato Puree!!! 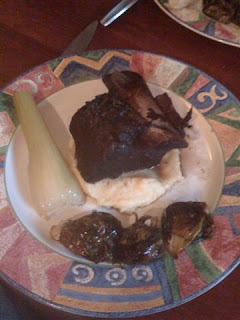 This picture doesn't do the meal justice.

The short Rib had been slowly cooking for days and the result was a super tender, fall of the bone but surprisingly not fatty piece of meat that almost melted a bit when you took a bite.

The Brussels sprouts were straight from David Chang's recipe roasted with fish sauce and rice krispies.

Do you understand now why we wanted our friend to host this party??

He went all out!

By the end of the meal we were so full we had to wait almost two whole hours before we could even think about dessert.

Meanwhile we had a wonderful time drinking some wines from Long Island and lots of NY beers such as Brooklyn Black Chocolate stout, Brooklyn Lager and all of the Ommegeng's (Abbey ale, Three Philosophers & Rare Vos)

When dessert time finally did roll around it was a five star end.

A box of some kind of Chinese Almond Brittle from Chinatown and a Peanut Butter Pie straight from Magnolia Bakery.

OMG..again..Magnolia has SO much more to offer than cupcakes!!!

This pie had a creamy peanut butter filling inside a crispy wafer crust, crushed peanuts, Reese's peanut butter cups on top and a surprise layer of Carmel that just blew this dessert out of the park!

I know I gained about 10 pounds from this dinner and it was worth it.

The funniest thing is that we could do it all again with all different foods!

This was truly one of those nights that reminds you why NYC is so great! We have the best food and you can do it all at home!!

Go to the liquor store- get some wine and whip up some delicious food with these recipes. Turn your home into the NYC experience!