August 30, 2007
So we returned to Resto for dinner with friends on Thursday night. It was a lot more crowded than it was for brunch and we couldn't even get a seat at the bar. The tin ceilings make it quite loud and it was difficult to here everyone once we got seated. Our waiter ended up being the same guy we had at brunch and once again we had excellent service.


They have such a fantastic Belgian beer list it was difficult to choose just one. I decided to have the Corsendonk Brown which was a good choice. It was really malty but surprisingly light for a 7.8% beer.

For my appetizer I got the special Heirloom Tomato and Bacon salad which was the highlight of the meal. It was so fresh and tasty. 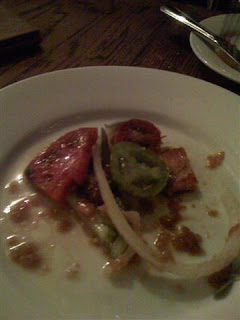 Other appetizers were the deviled eggs, sausage special and double cooked pork. The sausage was nothing special but the pork was quite tasty. The deviled eggs on the other hand were the most fattening things I think I've ever eaten. Grease was literally dripping from the toast they were sitting on. I felt like I had just poured a tub of lard down my throat.

Instead of a main course I decided to get two more appetizers. The first was the Lobster Croquette. 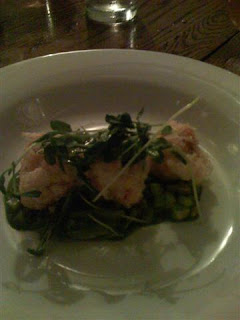 These were alright. The green sauce it came with was interesting but nothing special. I honestly would not have remembered this dish if I hadn't take a picture. Nothing bad- just nothing to great either.

The other appetizer I will always remember unfortunately- the lamb ribs.

Here's the thing. a friend had ordered them as their appetizer and loved them. Full of meat and really tasty looking. Mine came and while they looked the same, all three ribs were fat. I mean ONLY fat- no meat in any! I was with Mr. T's work friends so I didn't send it back for fear of embarrassing him.

I'm still unsure what I feel about Resto. It has great potential but the food is very heavy. I think I will be back for beers at the bar and brunch but that's probably about it.