Not Quite Rosy at the Modern

August 30, 2007
We had some friends come to visit last week and we ended up in Midtown doing some of the obligatory tourist things. We walked around Tiffany's and stopped by Central Park to enjoy the nice weather.


After a few hours we decided we needed to stop and grab a drink. We were right near the Museum of Modern Art so we decided to stop in at the bar for a cocktail. We figured we could kill two birds with one stone- they could say they were at the museum (kind of!) and we could have a break from walking.


Upon entering the Modern I loved the open and airy decor. There really isn't much as far as decoration is concerned is just very well....modern looking.


We sat down and looked at the cocktail list and the Coming up Roses cocktail caught my eye. The cocktail was described as having Rose Petals, Lime, Rosewater, Bacardi razz and Champagne. Fantastic I thought.


We ordered our drinks and as we talked the bartenders got to work in front of us. They brought out the beers and my friends drink and then began to work on my cocktail.


Here's the thing. As my cocktail was being made the 2 bartenders began to get into quite a discussion about something going on at the restaurant. As they were talking the one bartender took the bottle of Bacardi Razz and literally filled the glass almost to the top with the liquor. 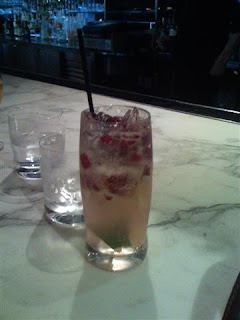 When I tasted my cocktail it was so strong my mouth was on fire. Mr T tried it and summed it up perfectly "It tastes like an old woman's perfume".

I usually would have sent it back but the staff was back again in an intense television discussion and I didn't feel like trying to get their attention again when I should be enjoying time with my out-of-town friends.

So not everything was Rosy at the Modern for me at least....