August 01, 2007
To celebrate the actual day of Mr. T's birth we meet up with some friends for dinner at RUB. RUB is a BBQ joint that specializes in Kansas City style cue. One of our friends is from Kansas and swears these ribs are the real deal.

RUB smokes their meat for hours on the grill and the wondeful smell fills the restaurant and spills out into the street. I secretly think they blow the smoke out onto the sidewalk so it consumes meat obsessed people like me.

I've passed by before, and immediately visions of myself ordering every kind of meat imaginable: ribs, brisket, ends, chicken enter my head. Baked beans spilling onto my shirt, fingers covered in greasy, spicy, glorious goodness. And then,

It's over. The smell has passed and I am in a sort of stupor as to what had just occured.

I was so excited to get my grub on as soon as we were inside I felt a little crazy because I knew how good it was going to be. My mouth was watering as soon as we stepped inside. It was then I noticed the Burnt Ends were on the chalkboard. I was so happy!! We've been here twice and they were out both times. I was finally going to get to try the ends!!

The waitress came over to take our drink order and I got a Shiner Bock beer. 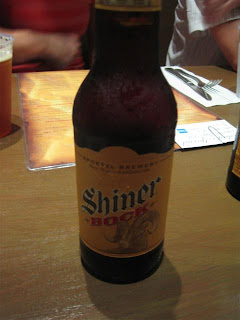 There was a big to do when RUB got this beer at their restaurant. Apparently it's the only place in NY State that carries it. No one is even too sure how they get it shipped into the state. The BBQ Baron isn't telling his source either. So since I believe in trying just about anything once- I got one.

It ended up being quite good. It poured a dark amber color but surprisingly didn't have much of a smell to it. It was a nice easy drinking bock though. I could see myself picking up a six pack if they ever start selling them in NY.

So then the waitress came to take our order and a horrible thing happened.

Waitress "Hey guys just so you know we just ran out of the burnt ends dinner."

Nooo!! I seriously felt my stomach let out a large mean growl of protest. Once again we had just missed the burnt ends.

Sometimes life is just so unfair.

So we decided instead to get the St. Louis rib platter of both short and long end beef ribs. 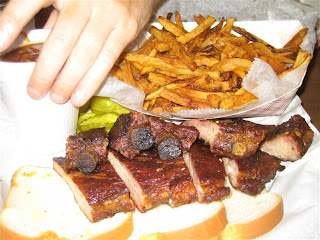 The ribs were awesome! The short ribs were a little leaner and the long were a little more greasy. Both had the same hickory rub smoked into their skin. These are seriously great ribs.
Other people got some brisket sandwiches and stuff. One looked really good that came with fried green tomatoes and bacon. Yum!!! I am going to try that next time I come.
We were really full so decided to skip the deep fried oreos for dessert and just head to the bar next door for an after dinner beer!
With tip for 5 people we ended up paying about $35 a person which is pretty good considering we each had at least 2 beers and there was plenty of food left over what with all the sides and such.
I love RUB. But I also love Blue Smoke, Hill Country and Houston's. I am planning to try and eat at all of them in one week to do a more side by side comparison but for now lets just say any 'que is good 'que.
http://rubbbq.net/
beer RUB