August 04, 2007
I love trying out new beers and do so whenever I have the chance. Summer is quickly coming to a close so I'm trying to get in all the new fruit beers out there while I can. At Whole Foods the other day, I saw two I had never seen and decided I would do a beer boxing match. 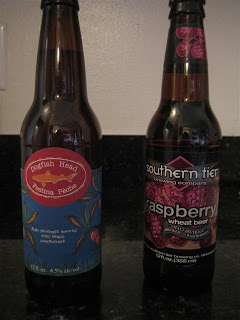 In the left corner, weighing in with an alcohol % of 4.5, the Dogfish Head Festina Peche. 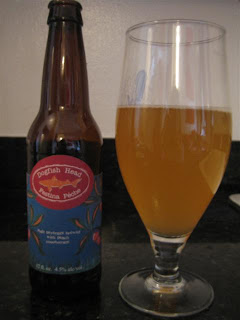 The beer poured a cloudy orange color with a small head that quickly disappeared after about a minute. I went to have a whiff of this beer and it surprising had hardly any smell at all. Their was the slight nose of peach but nothing too strong. I had a sip and my mouth instantly puckered. This beer is has a very tart and sour taste to it unlike any fruit beer I have ever tried before.

Next up, in the right corner weighing in at....hmmm...no idea. Nothing written on the label. Automatic deduction for inadequate beer information- The Southern Tier Raspberry Wheat Ale. 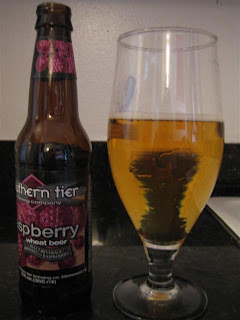 This beer pours a nice light gold color, with the same dissipating head as the former. The smell of raspberries is quite strong but the taste is not overpowering. The raspberry flavor comes through but so does the wheat of the beer itself.

Hands down The Southern Tier Raspberry Wheat Beer. The sourness of the Dogfish was so much that I didn't even come close to finishing the beer. I was a little disappointed because I love Dogfish Head's other beers, but this one was just to much for me.

The Southern Tier was also a little bit too fruity but I enjoyed its light body. A nice beer for drinking when it's 90 degrees outside and the AC is broken.

Next match...The battle of the Belgians!!

Anonymous said…
I can't believe you preferred the Raspberry Wheat. It doesn't taste like anything. The Festina Peche is always perfect, never lacking in flavor, easily one of the best beers on the market, but sadly only available during the summer. I found your post while looking for information on pairing fruit and beer, if you were wondering.
June 29, 2008 at 11:14 PM